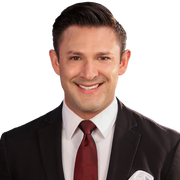 Robert Guaderrama joined the FOX35 team in March of 2019 as the Government and Finance Reporter.

Robert comes to Orlando from Cincinnati, Ohio where he was a Morning Show Reporter covering Midwest weather and breaking news. Prior to Ohio, Robert was the Morning Anchor of NBC El Paso, Texas and a General Assignment Reporter and Consumer Reporter at CBS in Midland/Odessa, Texas.

Robert is no stranger to warm climates. He is was born and raised in San Diego. He graduated from California State University, Fullerton with a Bachelor’s Degree in Communication with an emphasis in Broadcast Journalism. Robert is also not a stranger to Disney. He performed for Disneyland in California for three years in shows and parades.

During his career, Robert’s work has been recognized with several awards including an Emmy Award in 2018 for his coverage of a trial of an officer-involved shooting death. He also has won an Excellence in Journalism Award from the National Association of Hispanic Journalists in 2017 and two Texas Association of Press Broadcaster’s Awards in 2015.

Robert strives to hold the powerful accountable, find the truth in stories and tell stories that make a real impact on people’s lives.

Robert is thrilled to be back in warm weather and close to the attractions. In his spare time, you can find Robert working out or satisfying his foodie appetite.