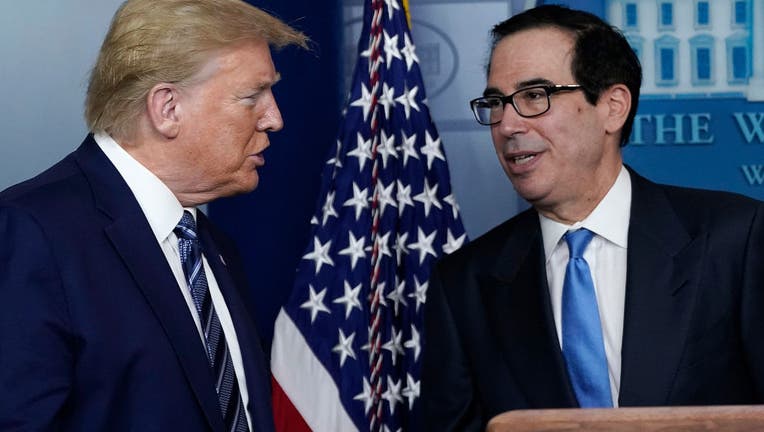 With White House officials and top Democrats at a weeks-long impasse over another coronavirus relief package, Senate Republicans are preparing to unveil their own new proposal — a pared-down version of a previous bill that notably does not include a fresh round of stimulus checks.

The "skinny" GOP relief bill is expected to include $300 in extra weekly federal unemployment benefits until Dec. 27, another round of money for the Paycheck Protection Program, and an additional $10 billion for the U.S. Postal Service and liability protections, according to Politico, citing two GOP sources. The proposal would also allocate additional funding for schools and education.

The revised measure, expected to be released this week, would represent a scaled-back version of the $1 trillion HEALS Act introduced by Republicans at the end of July.

RELATED: US unemployment claims jump back above 1 million in face of coronavirus

But unlike the HEALS Act (and a $3 trillion proposal passed by House Democrats at the end of May) the newest legislation will not include a second $1,200 payment for American families.

Both political parties broadly support sending another cash payment of $1,200 for adults and $500 for kids -- meaning that a family of four could receive up to $3,400, with the necessary qualifications nearly identical to the first stimulus check -- amid the worst economic downturn since the Great Depression.

However, the Democratic proposal would allow undocumented immigrants to receive the money, removing language that prohibited payments from going to anyone who filed taxes jointly with someone who used an Individual Taxpayer Identification Number.

The Treasury Department says the U.S. budget deficit climbed to $2.81 trillion in the first 10 months of the budget year.

Democrats would also increase the amount of money per child to $1,200 for up to three children, meaning that families could receive a maximum of $6,000 from the government.

The Republican proposal would keep the $500 amount for dependents established in the CARES Act but would modify it so families with dependents over the age of 17 will be able to receive the extra cash.

Both chambers would have to pass one of these bills (or a new one) that President Trump would then sign into law before individuals receive more government-funded cash.

Last week, Trump again signaled that he backed additional cash payments. In a tweet, he said he'd directed Treasury Secretary Steven Mnuchin to "get ready to send direct payments" to all Americans, blaming Democrats for the congressional stalemate.

"I’m waiting for the Democrats to approve it," Trump said during a White House press briefing on Friday, clarifying that he was not planning to act unilaterally on the stimulus checks.

Relief negotiations broke down during the first week of August when the two sides could not agree on how much money should be spent in the aid package.

It's unclear how much the GOP's new proposal will cost, but Democrats have said they will only sit down with Republicans if they agree to a $2 trillion price tag. Asked when she thought she might speak with Republicans again, Speaker Nancy Pelosi told reporters: "I don’t know. When they come in with $2 trillion."

But Mnuchin suggested Democrats may be willing to resume negotiations this week after Pelosi called back the House for a Saturday vote on a bill that would provide $25 billion to the U.S. Postal Service.

“Speaker Pelosi is coming back to look at Postal; hopefully she’ll be more interested in sitting down,” the Treasury secretary said in an interview on CNBC.

Adding to the pressure for Democrats and Republicans to cut a deal is the unexpected increase in the number of Americans who filed for unemployment benefits last week. More than 1.1 million laid-off workers filed jobless claims the week ended Aug.15. It marked the highest single-week increase since mid-March, when the pandemic began.

"We've been very disappointed to not see a greater sense of urgency in Congress for a phase four agreement on those provisions for which there is bipartisan support," Tyler Goodspeed, a White House economic advisor, told FOX Business on Thursday, noting there's bipartisan support for a second round of $1,200 economic impact payments.

The Senate is slated to return from recess on Sept. 8 and the House on Sept. 14.

Congress has until Sept. 30 to come up with a budget for the next fiscal year.