Deserving hound given loving home to live out golden years

If he could talk, what a tale he could tell. Cynthia Smoot reports

AUBURNDALE, Fla. - A bloodhound recently rescued by a woman in Polk County has quite the story, and the latest chapter began with a phone call from his former owner.

Boone is up in years and has several health issues like skin tags, ingrown eyelids, but he's actually in pretty amazing shape given what he has been through. A previous story mentioned he was overweight, but he was actually underweight when he was found.

Miles Christian-Hart could hardly believe it when he got a call from Sarasota Animal Services that they had his dog.

Boone had disappeared more than four years ago, into the Myakka River State Park forest. Miles never expected to see him again.

He was in Tennessee when he got that call and his circumstances had changed since Boone ran away. Miles and his wife are caring for her mother and can't have any pets right now. 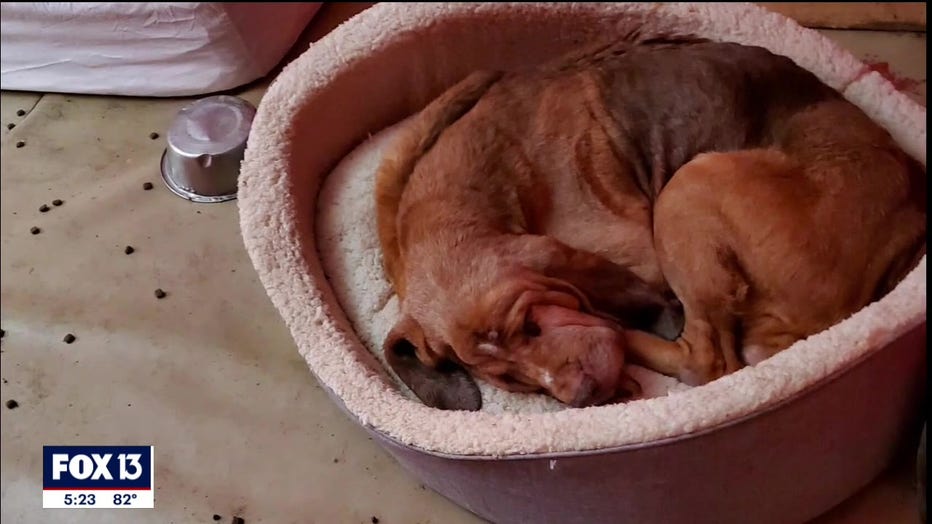 His heart sank when they told him Boone wasn't a candidate for adoption.

"I was so concerned they were going to euthanize a perfectly great dog," he said.

He started calling local rescue groups, but it was actually a wrong number that saved Boone.

Stefanie Badillo was the one who answered.

"I said 'OK, I'll go get him,' and I went to Sarasota and I got him because they said he was unadoptable," Stefanie recalled. 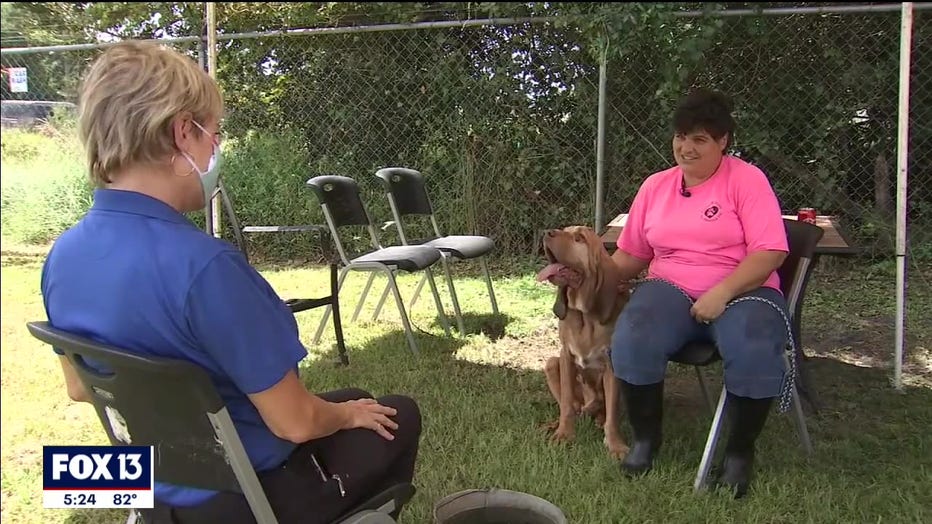 To her, no dog is unadoptable. She founded and runs Crossed Paws Pet Rescue in Auburndale, which operates solely on donations.

She and four volunteers have rescued and found homes for about a thousand dogs since 2018.

Says Stefanie, "I take in the sick, the unwanted, the injured. If they're half dead, I bring 'em back to life.

Stephanie picked up Boone and took him straight to the vet. He was anemic and could hardly walk. But after four years lost in the Florida forest, he was surprisingly heartworm-free. 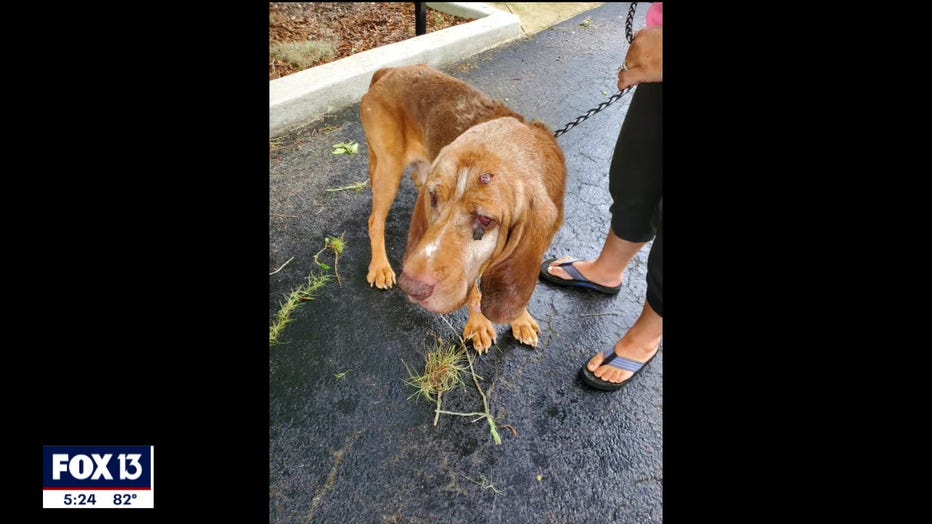 Boone after being rescued

When Stefanie sent photos to Miles, he filled her in on Boone's past. There was more to this old hound than saggy skin and graying fur.

"He was pretty shocked by how he looked, then he told us he had been in the movies and been to Haiti," Stefanie said. "He was a hero! He was a hero dog!" 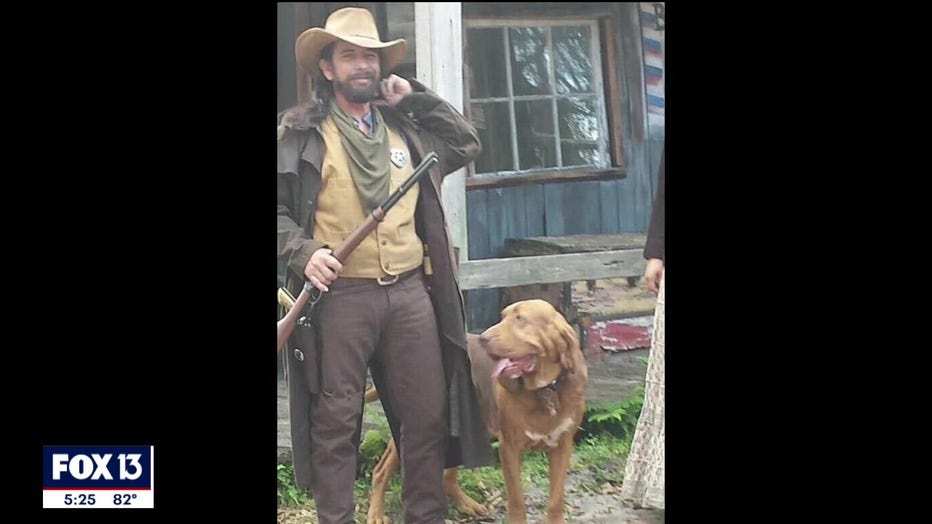 Boone with Miles, appearing in the TV show "Dry Creek"

Boone is a trained bloodhound with a particularly good nose for tracking. He went to Haiti after the earthquake of 2010, which killed more than 200,000 people. Miles said Boone saved several people from the rubble.

He was also a TV star for a short time.

Miles played the character of Marshal Jeremiah Nix in the show "Dry Creek," which was filmed in Parrish, Florida. He says Boone was his sidekick, sort of like his deputy. He also says Boone was a natural in front of the cameras. 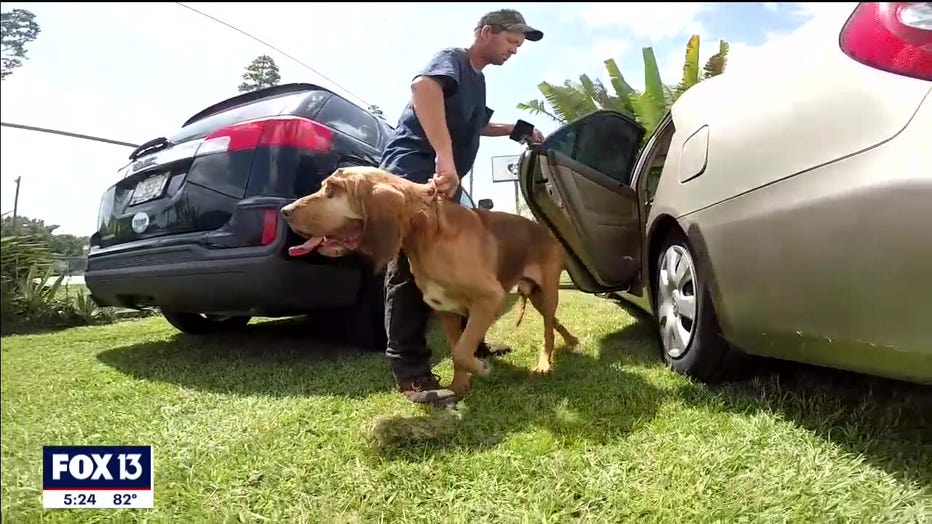 Miles said he is overjoyed and grateful that Badillo rescued Boone and found him a new home. A local family had stepped up to adopt him, but Boone had already bonded with his foster mom, so Badillo said that's where he'll live out his golden years.