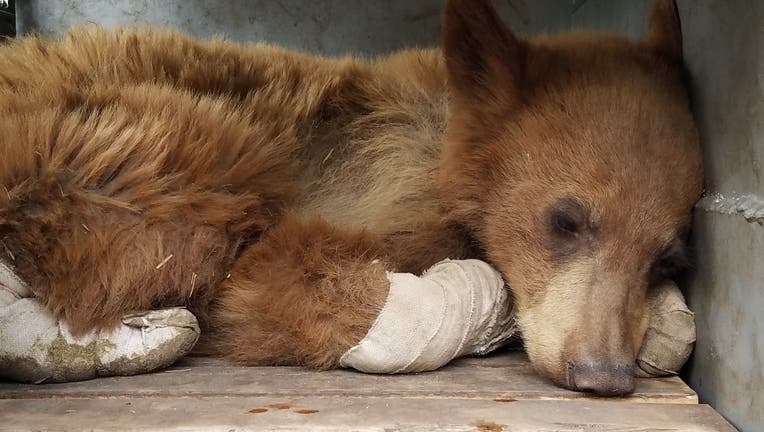 DURANGO, Colo. - A baby bear is recovering after suffering burns in the East Canyon Fire in southwestern Colorado.

The bear, which is about one year old, suffered burns to its paws last month.

“We received a call from local firefighters working on the East Canyon Fire west of Durango regarding a bear that was seen walking around the perimeter of the fire that was severely burned,” Colorado Parks and Wildlife (CPW). “Our wildlife officers were able to safely tranquilize the bear and assess its injuries. The yearling bear suffered from severe burns on all of its paws and was transported to our Frisco Creek Rehabilitation Facility, where our staff will further evaluate and treat its injuries.”

In an update on June 19, CPW said the baby bear is now recovering at its rehab facility in the San Luis Valley.

“It's going to be OK. Probably 6-8 weeks and will be ready for release.”

On July 7, CPW posted photos of the baby bear walking around with its paws still wrapped up, but say that he is on the mend and improving.