Florida Governor Ron DeSantis defended using funds intended for use in the state of Florida to fly Venezuelan asylum seekers from Texas to Martha's Vineyard, Massachusetts during an appearance in Manatee County Tuesday. *DeSantis made unsubstantiated claims about the location of the migrants and immigration issues during his appearance.

TALLAHASSEE, Fla. - Governor Ron DeSantis  said he could not confirm that Florida was funding another flight for migrants in Texas, possibly to be relocated to other states. However, he defended the state funding of two flights that took Venezuelan asylum seekers from Texas to Martha's Vineyard, Massachusetts in the week prior.

During an appearance in Bradenton, Florida Tuesday, DeSantis criticized President Joe Biden and Democrats who he said support "open borders" and called on so-called sanctuary cities around the U.S. to take on the burden of immigrants coming across Mexico's border into Texas.

DeSantis said he could not confirm that Florida was paying for another flight to carry migrants away from Texas, but records on the state of Florida's financial office website showed a second invoice for the private aviation company contracted to fly the Venezuelan asylum seekers from Texas a week prior. 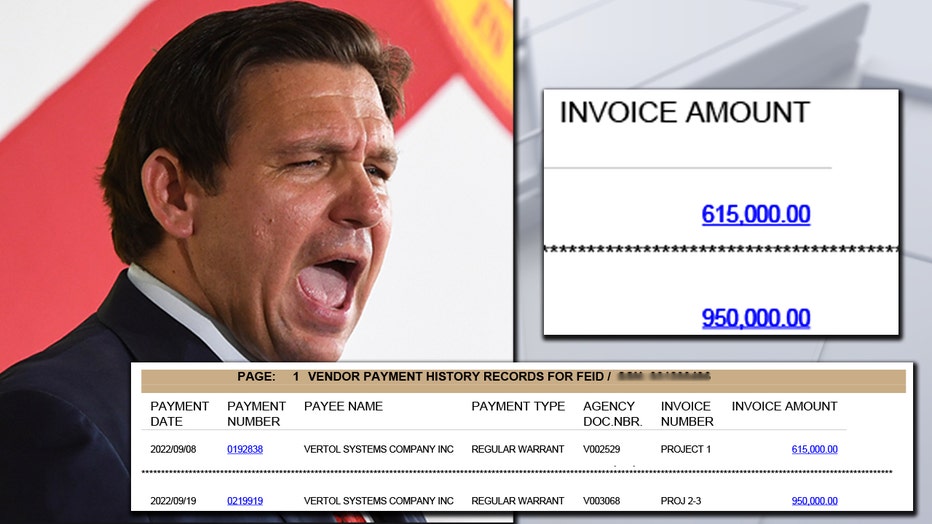 According to the website for Florida's Chief Financial Officer Jimmy Patronis, an invoice for the vendor Vertol Systems Company, Inc. was paid on September 8 for two flights that have stirred questions about the legality of state expenditures related to relocating migrants. The flight cost $615,000.

On Monday, Sept. 19, another invoice for Vertol Systems – this time for $950,000 – appeared in the comptroller's vendor payment records.

During his appearance in Manatee County Tuesday, DeSantis said he "didn't hear a peep" from Democrats "when Biden is flying these people all over the fruited plains in the middle of the night."

DeSantis also made claims about the treatment of migrants, in general, by the Biden administration and added that the flight from Texas to Martha's Vineyard was "volunteer."

Meanwhile, Florida House Democrats are calling for Republican legislative leaders to block the funding that DeSantis said he planned to continue using to transport migrants around the country.

The Democrats said DeSantis has "abused" spending authority in the state budget, in a letter to House Speaker Chris Sprowls (R-Palm Harbor), Senate President Wilton Simpson (R-Trilby), and the Joint Legislative Budget Commission, about $12 million set aside for migrant-relocation efforts.

Incoming House Minority Leader Fentrice Driskell (D-Tampa) said DeSantis overstepped his authority in seeking to "score political points," because the budget allocation is for relocating people who are in the U.S. illegally and found in Florida.

Two planes filled with migrants were sent from Florida to Martha's Vineyard on Sept. 14. Gov. Ron DeSantis' spokesperson said it was "part of the state’s relocation program to transport illegal immigrants to sanctuary destinations."

House and Senate Republican leaders did not immediately respond to the News Service of Florida's requests for comment.