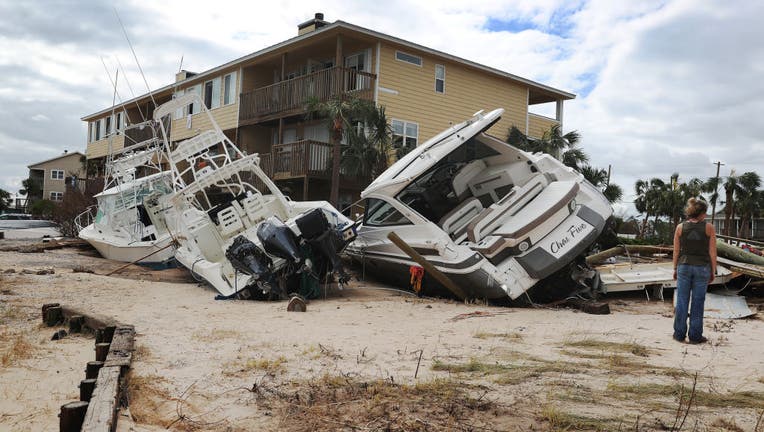 Boats are seen pushed up against a building at Lost Key Marina & Yacht Club after Hurricane Sally passed through the area on September 17, 2020 in Pensacola, Florida. (Photo by Joe Raedle/Getty Images)

After an aerial tour of the storm-drenched western Panhandle, DeSantis said he expects the impacts to be more severe than what he could see from above as much of the anticipated damage is from water. In addition to heavy rain, storm surge reportedly topped five feet.

“I think you're going to have to really just get boots on the ground to get the full impact of what happened,” DeSantis said. “Clearly, there were definitely still some areas where it was obvious that you had some major flooding. There are other areas which, from the bird's eye view, I don't think probably did full justice to the actual damage that we saw inside the homes.”

As of Thursday afternoon, no fatalities in Florida had been tied to the storm.

DeSantis said the state was relocating residents of an assisted living facility that lost power in Santa Rosa County to another facility.

The state was also assessing damage to six bridges that remained closed, including the Pensacola Bay Bridge, known locally at the Three Mile Bridge. The span, which is the primary link for Gulf Breeze and Pensacola Beach to Pensacola, lost a significant section after being hit by a barge.

DeSantis said the transportation department is reviewing potential negligence by the barge owner, but he noted the owner might have been following models from the National Hurricane Center that showed Hurricane Sally headed toward Mississippi. The Category 2 storm made landfall Wednesday morning in Gulf Shores, Ala.

“We got a wobble to the east. And that obviously had greater impacts for Pensacola,” said DeSantis, who as the storm neared the coast Tuesday was at the White House and at a charter school in Doral.

With at least three boil-water orders issued in Northwest Florida, the Division of Emergency Management had deployed 972,000 bottles of water and 179,000 meals.

DeSantis advised residents of the battered region not to explore the damage, as he directed the Florida Highway Patrol and the Department of Transportation to help utility crews travel through the region.

“Just understand, if you're somebody that is just kind of going out to drive to drive, now may not be the best time to do that,” DeSantis said. “It's really slowing down being able to get all the utility trucks where they need to be.”

DeSantis continued to warn of cresting rivers and streams that flow from the north into the Panhandle, as remnants of Sally were centered Thursday afternoon over Georgia.