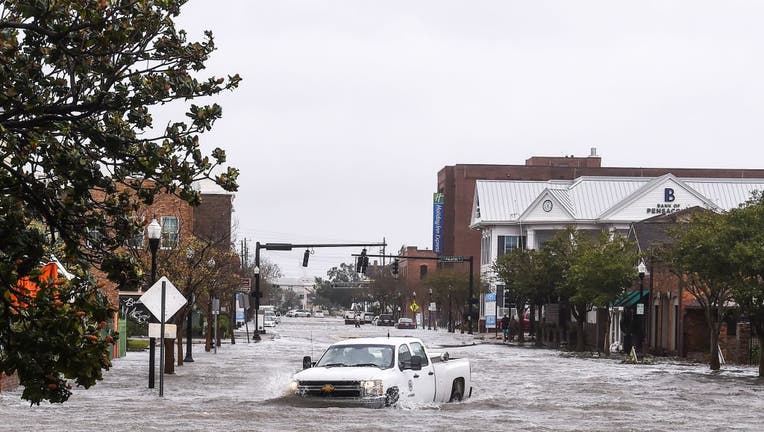 A city worker drives through the flooded street during Hurricane Sally in downtown Pensacola, Florida on September 16, 2020. - Hurricane Sally barrelled into the US Gulf Coast early Wednesday, with forecasts of drenching rains that could provoke "his

TALLAHASSEE, Fla. - Gov. Ron DeSantis plans to travel Thursday to the hurricane-battered and drenched western Panhandle to survey the damage as search-and-rescue teams fan out across the region.

With Hurricane Sally causing a massive storm surge and damaging roads and bridges, DeSantis said utility crews might not be able to move into the area until Thursday morning to begin restoring power to more than 230,000 electricity customers.

“We're working closely with the utility companies, they have crews of linemen, who are mobilizing,” DeSantis said during a late Wednesday afternoon news conference at the state Emergency Operation Center.

RELATED: Sally triggers power outages for over 500,000 along Gulf Coast

“They're not going to be able to be out there in 30 to 40 mile-an-hour winds,” he continued. “And so, we think, probably tomorrow morning, you'll start to see that. But we understand that that's something that's very, very significant.”

Sally continued to dump water on Panhandle communities hours after its morning landfall near Gulf Shores, Ala., as a Category 2 storm, packing 105 mph maximum sustained winds. It later was downgraded to a tropical storm.

Coronavirus for not, hurricane hunters still have a job to do, though their work spaces look a little different now.

Also, DeSantis warned that as the system moves across Alabama and Georgia, continued rain will increase the risk of rivers flooding in Northwest Florida.

“You are going to have these rivers that are going to crest, maybe it will happen tomorrow, maybe Friday, you may even see some of them maybe happen this weekend,” DeSantis said. “This is kind of the initial salvo, but there is going to be more that you’re going to have to contend with.”

While property damage is expected to be widespread, attention was already focusing on a missing section of the Pensacola Bay Bridge, known to locals as the Three Mile Bridge, which connects Pensacola with Gulf Breeze.

“We have bridge inspection teams that are out there helping the counties,” DeSantis said. “Obviously, we want to get the bridges open as soon as possible, but we want to make sure that it’s done in a safe manner.”

Most of the people without electricity were in Escambia, Santa Rosa and Okaloosa counties.

Florida Power & Light said it was sending about 1,800 line workers and contractors to help Pensacola-based Gulf Power restore electricity. FPL and Gulf are both part of NextEra Energy, Inc.

“FPL always stands ready to support our partner utilities in their time of need, just as they have supported us in previous hurricane restoration efforts,” Eric Silagy, FPL president and CEO, said in a prepared statement. “In this case, we’re lending our support to our sister company --- Gulf Power --- whose customers are feeling the worst of Hurricane Sally including severe flooding and power outages.”

Also, municipal utilities in Florida were sending about 90 workers to help restore power in Alabama communities, according to the Florida Municipal Electric Association.

As of Thursday afternoon, the center of Sally was located just north of the Alabama border, traveling at 7 mph to the northeast. Maximum sustained winds were down to 60 mph.

DeSantis said two fatalities discovered by emergency crews in Santa Rosa County were not believed to have been tied to the storm.

The state has deployed 500 members of the Florida National Guard, and more than 600 search-and-rescue missions had been undertaken by members of sheriff’s offices, the U.S. Coast Guard, state law enforcement and the National Guard.

Florida Chief Financial Officer Jimmy Patronis, whose job includes serving as state fire marshal, announced that urban search-and-rescue teams from Miami, Tampa and Jacksonville had been deployed to the Panhandle, with team members tested for COVID-19 before heading out.