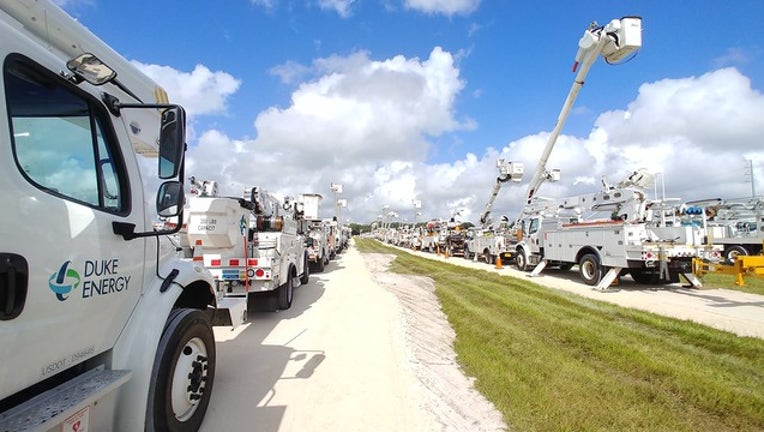 Duke Energy shared this photo of power crews preparing for a possible hit by Hurricane Dorian in September of 2019.

The request, filed last week, came after the Florida Public Service Commission in February allowed Duke to begin collecting $171.3 million on an interim basis because of estimated costs associated with Dorian and Tropical Storm Nestor. But that decision required Duke to come back and seek approval after actual costs were tallied --- what is known as a “true-up” process.

Dorian, which devastated the Bahamas, threatened to cut across the middle of Florida, where Duke has large numbers of customers. Duke mobilized thousands of workers to prepare for a hit, but Dorian ended up veering away from the Florida coast and did not make landfall in the state.

The Public Service Commission has regularly allowed utilities to recoup storm costs from customers, and the issue is addressed in a 2017 rate agreement reached by Duke.

Customers started seeing extra charges on their bills in March, after the commission approved the $171.3 million in estimated costs in February. Those charges were expected to last a year. But with the actual costs coming in at a lower amount, the utility now expects the costs to be fully recovered by the end of December, according to testimony filed last week by Thomas Foster, the company’s director of rates and regulatory planning.

The extra charges approved in February translated to an extra $5.34 a month for residential customers who use 1,000 kilowatt hours of electricity each month, a common industry benchmark. Almost all of the costs that Duke seeks to recover are from Dorian, with only a fraction related to Nestor, which hit the Panhandle.

During a hearing in February, Patricia Christensen, an attorney with the state Office of Public Counsel, which represents consumers in utility issues, said the 2017 Duke rate settlement allows the utility to collect storm-related costs from customers. But she said the office also had concerns about the issue, as Dorian and Nestor “had little to no impact on Florida.”

“We recognize that Hurricane Dorian was a Category 5 hurricane that was expected to hit Florida and impact multiple utility territories, and it was prudent to engage in some level of pre-storm preparedness,” she said. “But we believe that as a matter of policy, the commission needs to look at, what is the appropriate level of the pre-storm preparation and how much of those costs should be borne by the utility customers.”