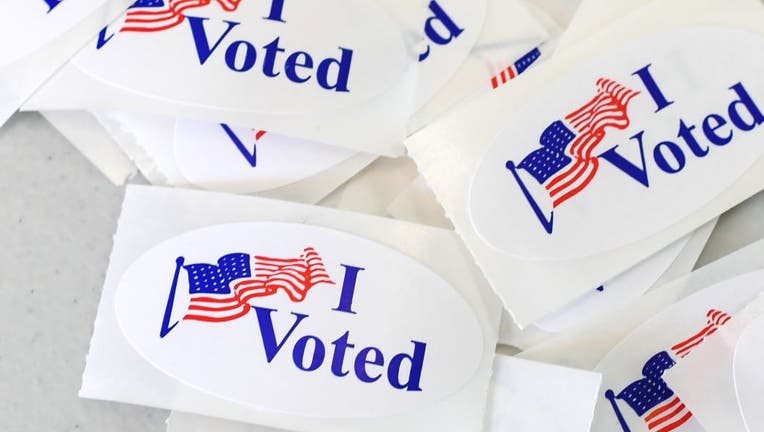 I VOTED stickers are seen at a polling station on the campus of the University of California, Irvine, on Nov. 6, 2018 in Irvine, California on Election Day. (Photo by Robyn Beck / AFP via Getty Images))

TALLAHASSEE, Fla. - The first votes from Floridians are in for the 2020 general election.

The state Division of Elections on Tuesday morning posted that 42 vote-by-mail ballots had been returned, with most of them in Flagler and Monroe counties. Supervisors of elections must send requested vote-by-mail ballots to stateside and overseas military members, along with overseas citizens, no later than 45 days before an election.

The first big batches of vote-by-mail ballots for the Nov. 3 election will be sent out by county supervisors between Sept. 24 and Oct. 1. Of the first ballots returned, 19 were by Democrats, 17 were by Republicans, one came from a third-party voter and five were from voters without party affiliations.

As of Tuesday morning, almost 4.28 million of the state’s 13.89 million voters had requested vote-by-mail ballots, with nearly 1.99 million by Democrats and more than 1.33 million by Republicans, according to the state Division of Elections.

Florida Republicans have been working to counter Trump’s attacks on voting by mail in other parts of the country. With some states sending absentee-ballot applications to all registered voters and expanding election laws to allow voters to cast ballots from home amid the coronavirus pandemic, Trump has decried the possibility of election fraud. Trump, however, has said Florida --- a crucial battleground state --- is an exemplar of how mail-in voting should be conducted.

Florida requires voters to request mail-in ballots before elections officials can provide them. The state adopted its “no-excuse” absentee-voting system in 2002, and in 2016 switched the name from “absentee” to “vote-by-mail.”

The deadline to register for the election is Oct. 5.

Tune in to FOX 35 Orlando for the latest 2020 election news.