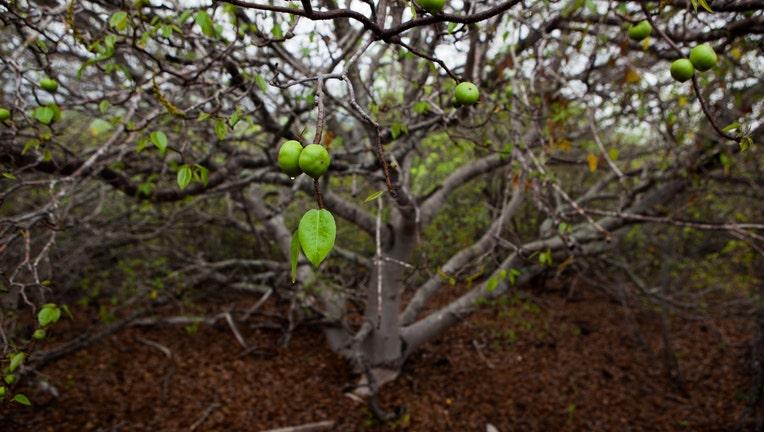 GALAPAGOS ISLANDS, ECUADOR - JANUARY 17: A Manchineel tree, Hippomane mancinella, in Galapagos National Park on January 17, 2012. Manchineel trees, also known as Poison Apple Trees, are one of the most poisonous trees in the world and the fruit is de

The Manchineel tree, also known as the Poison Apple Tree, doesn't look dangerous at first glance — in fact, some may be tempted to pick fruit and indulge themselves. This unsuspecting tree is considered the most dangerous tree in the world according to the Guinness World Records.

The name comes from the Spanish word "manzanilla" which means "little apple" referencing the leaves and fruit of the apple tree. Due to the deadly, toxic nature of the tree, the Spanish have also called it "arbol de la muerte" which means "tree of death," according to the University of Florida.

What happens if you touch a Manchineel Tree?

The Manchineel is native to southern Florida, the keys, several Caribbean islands, Mexico, and Central America. The sap that the tree exudes is so poisonous and acidic that even a small amount of contact with human skin causes a breakout of blisters. Some have even reported temporary blindness if a person touches their eyes.

The tree is so toxic, that even just standing under it in the rain is enough to cause blistering if the skin gets wet from raindrops containing sap. One bite of its small apple-like fruit can cause blistering and severe pain that can prove fatal.

If the tree is burned, the smoke from the fire can cause blindness.

What do people use Manchineel Tree sap for?

According to the University of Florida, Manchineel has been used for many different reasons since before colonial times.

Native people used the tree's poisonous sap to coat their arrows when hunting. In colonial times, the sap was thought to become neutralized by drying the wood of furniture in the sun.

For medicinal purposes, it has been documented that gum from the bark of the tree has been used to treat venereal disease and dropsy in Jamaica, while dried fruits are used as a diuretic.

Iguanas in Central and South America are able to eat the fruits of the poisonous tree and sometimes can be found living among the limbs of the tree.

The tree is also an endangered species here in Florida.