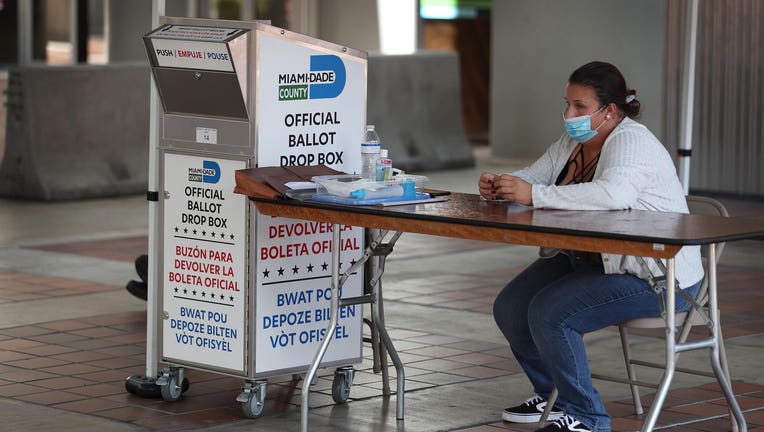 A poll worker waits for voters to help them put their mail-in ballot in an official Miami-Dade County ballot drop box on Aug. 11, 2020 in Miami, Florida. (Photo by Joe Raedle/Getty Images)

TALLAHASSEE, Fla. - Gov. Ron DeSantis’ administration is telling county elections supervisors that ballot collection boxes outside early voting sites have to be staffed, but the local officials’ attorney said Florida law doesn’t include any such requirement.

Department of State General Counsel Brad McVay sent an email to supervisors on Wednesday --- just days before the vast majority of the state’s 67 counties begin early voting Monday --- that he said was aimed at answering questions raised by local officials about drop boxes.

According to McVay’s interpretation of state law and a rule, drop boxes have to be manned by an elections official or an armed law enforcement officer at all times.

“This requirement serves a necessary purpose,” he wrote. “The statute requires that drop boxes remain secure from those who intend to do harm to the boxes (or the contents within them). A person onsite can prevent foreign substances or small incendiary devices (like firecrackers) from being thrown into the drop box; video monitoring cannot do the same.”

But Ron Labasky, general counsel of the Florida Supervisors of Elections association, told his clients that state law doesn’t require the drop boxes to be monitored in person.

“Drop boxes that are at the main office, a branch office or early voting site are required to be secure, but I don't see that there is any staffing requirement or hours of operation related to those drop boxes, per (a section of state law),” Labasky wrote in an email to supervisors Thursday afternoon. “There is no definition of secure, so in my view that is within the discretion of the supervisor.”

Drop boxes are among myriad elections-related controversies in Florida, a battleground state whose 29 electoral votes are considered crucial for a White House win in the Nov. 3 election. Recent polls have shown President Donald Trump and his Democratic opponent Joe Biden in a neck-and-neck race in the Sunshine State.

With supervisors encouraging Floridians to vote by mail because of the coronavirus pandemic, the number of mail-in ballots has exploded. Due to uncertainty about the U.S. postal system, many voters are choosing to drop off their ballots rather than risk having them delivered too late to count. Florida mail-in ballots must be received by 7 p.m. Election Day to be counted.

According to McVay, supervisors are allowed to place the boxes outside buildings, but they “must be properly staffed and secure” at all times. Supervisors’ employees and sworn law enforcement officers may be used to monitor discretionary drop boxes, but volunteers are not permitted, McVay said.

A rule finalized by Secretary of State Laurel Lee in April, highlighted by McVay in Wednesday’s message, said that secure drop boxes “must be clearly labeled, sealed and placed in an area where a designated election board member maintains custody and control of the drop box at all times.”

But Labasky said “there is no mention of those requirements” in state elections law.

“This is a letter, not a formal advisory opinion and not a ‘directive,’ which as Judge Walker last week noted the secretary (of state) have little or no authority to issue, based on her own stated legal position,” Labasky wrote, referring to U.S. District Judge Mark Walker’s comments during an unrelated elections lawsuit. “As the letter states, it's the department's interpretation of the law. As such I think a supervisor can take it as they choose to.”

County elections officials --- some of whom are relying on volunteers to monitor drop boxes --- will use their discretion about whether to have live monitors.

“Supervisors have evaluated the security of drop boxes located at their offices or early voting sites, which may not require a person observing or monitoring the box at all times,” Labasky told The News Service of Florida on Friday.

Democrats decried the move by Lee’s office, accusing DeSantis --- a staunch ally of Trump --- of meddling in the middle of an election.

“Any and all efforts to make it more difficult for Floridians to vote should be called out for what they are: voter suppression,” Jackie Lee, Biden’s Florida campaign director, said in a prepared statement.

Nearly 2.3 million Floridians had voted by mail as of Friday morning, and drop boxes already are in use, Jackie Lee pointed out.

“Non-binding, last-minute guidance from the state just causes confusion. Floridians should just keep doing what they are doing: voting, undistracted by these efforts. Our campaign will remain focused on ensuring that every single eligible Floridian is able to easily and conveniently cast their ballot,” she said.

State law allows voters to place vote-by-mail ballots in a “secure drop box” located at supervisors of elections’ main and branch offices and at early voting sites. In addition to their own offices, the law allows supervisors to use public libraries, courthouses, civic centers, stadiums, fairgrounds, county commission buildings, and government-owned senior centers or community centers as early voting sites.

“Secure drop boxes may also be placed at any other site that would otherwise qualify as an early voting site … provided, however, that any such site must be staffed during the county’s early voting hours of operation by an employee of the supervisor’s office or a sworn law enforcement officer,” the law says.

In response to a question about whether workers can be “deputized” to monitor discretionary drop boxes, McVay wrote that supervisors must make sure that “your relationship with the person makes that person ‘an employee of your office.’”

Only “an actual person onsite can help prevent ballots from being spoiled or destroyed,” McVay wrote.

“Bottom line: An employee or law enforcement officer physically present at the drop box locations can help protect the integrity of the drop boxes (and their contents) while also helping people who intend to use the drop boxes to vote,” he wrote.

McVay also said drop boxes cannot be used 24 hours a day at “discretionary” sites and must be staffed around-the-clock if used at supervisors of elections’ offices. Some supervisors said Friday they will continue to employ 24-hour drop boxes, despite McVay’s admonitions.

The move to restrict drop boxes by the Republican governor’s administration drew fire on social media on Friday.

“The Republican war on ballot drop boxes continues. What a shameful and pathetic party the GOP has become,” Marc Elias, an attorney who frequently represents Democrats in elections-related lawsuits, said on Twitter.