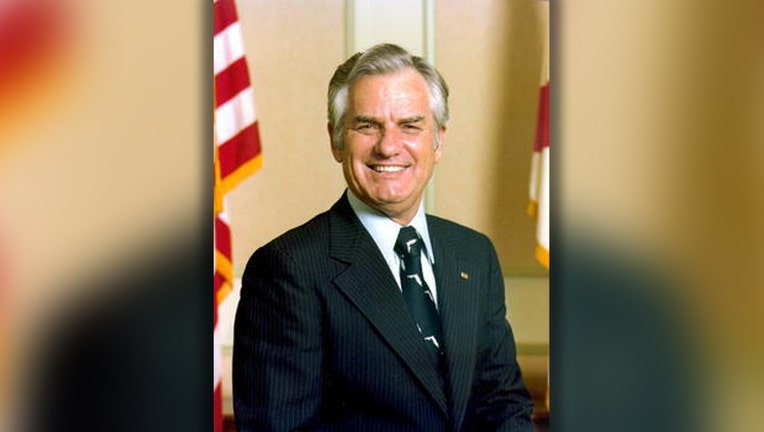 TALLAHASSEE, Fla. - Wayne Mixson, a North Florida farmer who served two terms as lieutenant governor and a brief stint as governor, died Wednesday at his home in Tallahassee. He was 98.

Mixson was elected lieutenant governor in 1978 and 1982 as the running mate of Democrat Bob Graham but is probably best remembered for serving three days as governor in early 1987. That came after Graham was elected to the U.S. Senate and stepped down as governor before his term ended to go to Washington.

“By an unprecedented twist of fate, Lt. Governor Mixson assumed the office of the governor of Florida for three days,” biographical information on the Florida governor’s mansion website said. “Upon vacating his office to assume the duties as a United States senator, Governor Graham triggered the short-lived ascendancy of his lieutenant governor into office as Florida's 39th governor.”

The biographical information added, “His proudest achievement, spoken in characteristic good humor, was: ‘I wanted to be known as the governor who did the least damage to Florida.’"

The two-term lieutenant governor said his three days as governor were “fully packed.” A conservative Democrat, Mixson made close to 200 appointments before Republican Bob Martinez was sworn in as governor.

“We had a full Cabinet meeting on (that) Monday,” Mixson said in a 2007 interview with The Associated Press. “We tried to tie all the knots together.”

He was later persuaded by longtime legislative historian Allen Morris to have his portrait hung alongside Florida’s other governors at the Capitol.

“He came to my office and said ‘I hear you’re not going to have a portrait made.’” Mixson recounted. ”‘You were not acting governor, (but) constitutionally the same governor as anybody else in Florida.’”

Mixson, a farmer from Jackson County, served in the Florida House before becoming lieutenant governor and state commerce secretary under Graham. President Jimmy Carter in 1979 appointed Mixson as a special ambassador to Ecuador.

“Governor Mixson dedicated his life to serving his community, his state and his country,” Mixson’s family said in a statement Wednesday. “Guided by his conscience and a love for the Sunshine State, he served Florida with great honor.”

Mixson was born in 1922 in New Brockton, Ala., and served in the Navy during World War II before graduating from the University of Florida. He is survived by his wife of 72 years, Margie Grace. Among his extended family members are great-nephew Jason Shoaf, a Port St. Joe Republican who was elected last year to represent a large swath of North Florida in the House.

Mixson was inducted in 1996 into the Florida Agricultural Hall of Fame, which described on its website his deep involvement in farming and rural issues.

“Gov. Wayne Mixson’s leadership ability was recognized early, and as president of his local county Farm Bureau, he worked tirelessly to get telephones installed in rural areas and to eradicate hog cholera from Florida,” the hall of fame website said. “Mixson’s career as a statesman began with his election to the Florida House of Representatives in 1967. As chairman of the House Agriculture Committee for eight years, he passed hundreds of measures affecting every segment of agriculture.”

The announcement of his death Wednesday said Mixson’s family will hold a private gathering.