Saturday evening, commotion broke out at the Pig on the Pond festival in Clermont. Were it not for a good Samaritan, that scare could have been much worse for a 12-year-old boy attending the festival.

CLERMONT, Fla. - Saturday evening, commotion broke out at the Pig on the Pond festival in Clermont.  Were it not for a good Samaritan, that scare could have been much worse for a 12-year-old boy attending the festival.

Andres Carolus says he wasn’t sure exactly what people were running from, he just knew it seemed urgent. "Me and my friend, all we just saw was people running away," Carolus explained. "So we just said, ‘Let’s run with the crowd, so we don’t get trampled.’"

Clermont Police say somehow, a fake gun threat sent a bunch of teenagers stampeding across the park.  That included Carolus, who suffered an asthma attack after escaping the commotion. 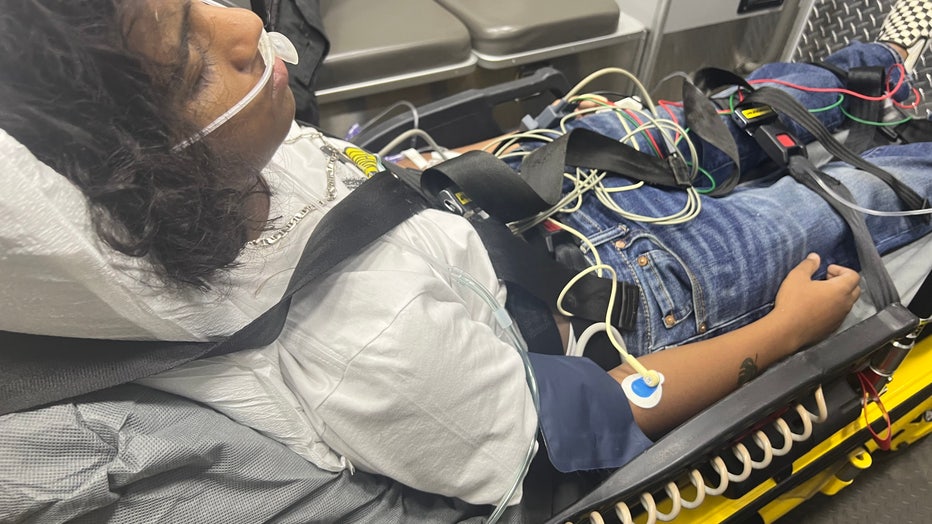 "I pass out," the boy recounted. "I wake up and there’s oxygen tubes in my nose, there’s an EMT thing in my arm, a bunch of wires. They put me on a stretcher."

The only reason there was an EMT there to help is that a good Samaritan, Margarita Ibarra, saw him collapse and rushed over to call 911.  "I knew something was wrong, but I couldn’t really tell what," said Ibarra.

She says her own son has asthma, so she understands what Carolus was going through. She stayed with him until an EMT could carry him away.  "I was very thankful," said Carolus’ father, Alex. He was there at the festival but was in a different area from his son when things started getting out of hand.

"There are good people in society. You’ve got to find them, but they’re out there," he continued, emphasizing how grateful he was that Ibarra was there for his son. "It’s very scary, you’re in a public place with a lot of people, and you don’t know who’s actually carrying a gun or not."

The Carolus family says there were Clermont Police officers at the park, but they wish there were even more officers on the scene. And they mentioned previous years had security checkpoints you had to pass through to get into the festival, but they didn’t see one at this year’s event. FOX 35 News has reached out to Clermont Police to learn more about that.

"I did notice, it was kind of – anyone could get in," said Ibarra, who was working as a vendor at the festival Saturday before she saw Carolus collapse. "Even though I showed my vendor pass, no one was checking bags. It felt like security should have been a bit tighter, considering there’s hundreds and hundreds of people."

When asked for comment the Clermont Police Department sent the following:

"The Clermont Police Department was not conducting security searches of personal bags during this event. This has not been a practice in prior Pig on the Pond events in the City of Clermont. Although we did not use checkpoints during this event, there were several law enforcement officers strategically placed throughout the event for security.

"We at the Clermont Police Department take the safety and security of the general public into great consideration when we are involved in the planning of these types of events in our City. Our officers are highly trained and follow a very detailed Operational Plan that includes specific assignments and security related information. We greatly appreciate all the cooperation from the public who attended this event, who alerted officers to the commotion. Please feel free to contact me if you have any additional questions."

Despite all that happened, the Carolus family and Ibarra all said they do plan to Pig on the Pond again next year.