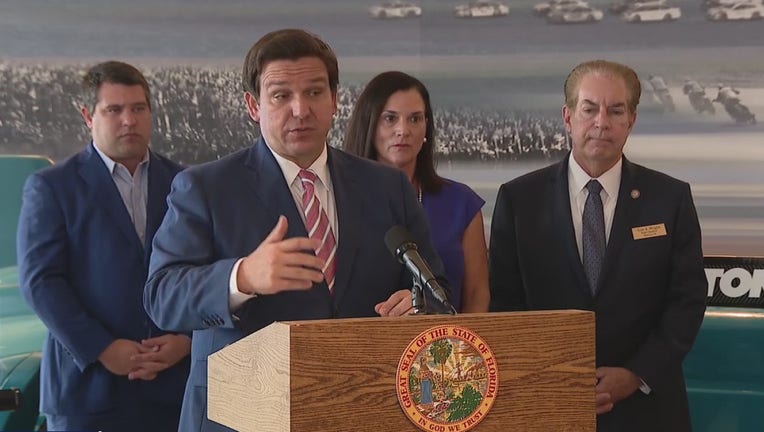 TALLAHASSEE - With Agriculture Commissioner Nikki Fried calling for a coordinated response by statewide elected officials to the coronavirus pandemic, Gov. Ron DeSantis on Tuesday defended the actions of agencies under his control.

DeSantis added that Florida Chief Financial Officer Jimmy Patronis and Attorney General Ashley Moody, who along with Fried make up the state Cabinet, have been able to get information from agencies when needed during the “difficult times.”

“I know Jimmy and Ashley… they meet with whoever they want to meet with, and they obviously have been able to do that,” DeSantis told reporters after a Cabinet meeting Tuesday that marked the first time since Feb. 4 that the four statewide elected officials gathered in person.

DeSantis and the Cabinet also held a conference call on May 28.

Fried, the lone statewide elected Democrat, has repeatedly called for Cabinet meetings and more coordination amid the pandemic.

She didn’t bring up the coordination issue during Tuesday’s briskly held meeting, which lasted about 90 minutes and mostly stuck to items on a lengthy agenda.

But on Monday, Fried hosted a virtual event that featured a number of policy experts. She used the event to argue that DeSantis shouldn’t have been allowed to solely address issues such as the state’s overwhelmed unemployment system, problems in health-care reporting, election security and how federal CARES Act stimulus dollars will be spent by the state to patch lost revenue.

“When the body in which we serve, the Florida Cabinet, that you elect, doesn't provide information and leaves state businesses pending for months, while canceling meeting after meeting, I have to step up and lead,” said Fried, who is widely mentioned as a potential challenger to DeSantis in the 2022 election. “This isn't hypothetical. People are asking how their government is addressing COVID-19. How we plan to help feed hungry families. How we will be dealing with a budget deficit. And how we will conduct safe elections while ensuring the sacred right to vote. It is our job as constitutional officers to give the people answers. And if the Cabinet can't, and the governor won't, then I will.”

Fried on Tuesday said the event --- which she dubbed a “cupboard” session --- was “an opportunity to hear from some of our experts on the issues that are really plaguing our state.”

DeSantis said most of the agencies that have been at the front of the response to the pandemic --- such as the Department of Economic Opportunity, which oversees the state’s unemployment system, the Agency for Health Care Administration, the Department of Health and the Department of Business and Professional Regulation --- have leaders that fall under the governor’s control.

“When you talk to like a hospital or all these places, it's not only that we're there to help, they'll say that, but we're there very quickly when someone needs something,” DeSantis told reporters after the Cabinet meeting. “You know we're on it because we understand how important it is. And so those are just a lot of things that, you know, are not necessarily under the Cabinet's purview at the same time.”