Governor Desantis comments on data by the Florida Department of Health

Governor DeSantis made the comments while visiting an Orlando nursing home with Vice President Mike Pence.

ORLANDO, Fla. - The woman who claims that she was terminated from her role of managing the Florida Department of Health's COVID-19 dashboard for refusing to manipulate data has several active criminal charges against her in Florida, including cyberstalking and cyber sexual harassment, Gov. Ron DeSantis revealed on Wednesday.

Gov. Ron DeSantis went to an Orlando nursing home with Vice President Mike Pence on Wednesday. While there, the two of them were asked a question about Rebekkah Jones. She claims that she was involuntarily removed from her role of managing the health department's coronavirus dashboard, which monitors and tracks cases in Florida.

Jones reportedly leveled strong suspicion about the reporting process moving forward, stating that, "I would not expect the new team to continue the same level of accessibility and transparency that I made central to the process during the first two months... my commitment to both is largely (arguably entirely) the reason I am no longer managing it."

However, the DeSantis administration dismissed the claims and said that Jones was fired for insubordination, disputing allegations that she was terminated for refusing to manipulate data.

Woman who ran Florida COVID-19 dashboard off the job

The woman who helped run Florida's coronavirus digital dashboard claims she was fired because she refused to adjust numbers to support reopening. Gov. Ron DeSantis responded by saying the woman in question was insubordinate.

DeSantis on Wednesday stated that Jones was not involved in collating any data, adding "she does not have the expertise to do that. She is not an epidemiologist."

He also said Jones was not the chief architect of the state's web portal. "That is another false statement, and what she was doing was, she was putting data on the portal, which the scientists didn't believe was valid data."

He said she was dismissed because "she didn't listen to the people who were her superiors," and for other reasons.

He then revealed that Jones has active criminal charges in Florida for cyberstalking and cyber sexual harassment, stating that "I've asked the Department of Health to explain to me how someone would be allowed to be charged with that, and continue on because this was many months ago. I have a zero-tolerance policy for sexual harassment, so her supervisor dismissed her because of a lot of those reasons, and it was a totally valid way, but she should have been dismissed, long before that." 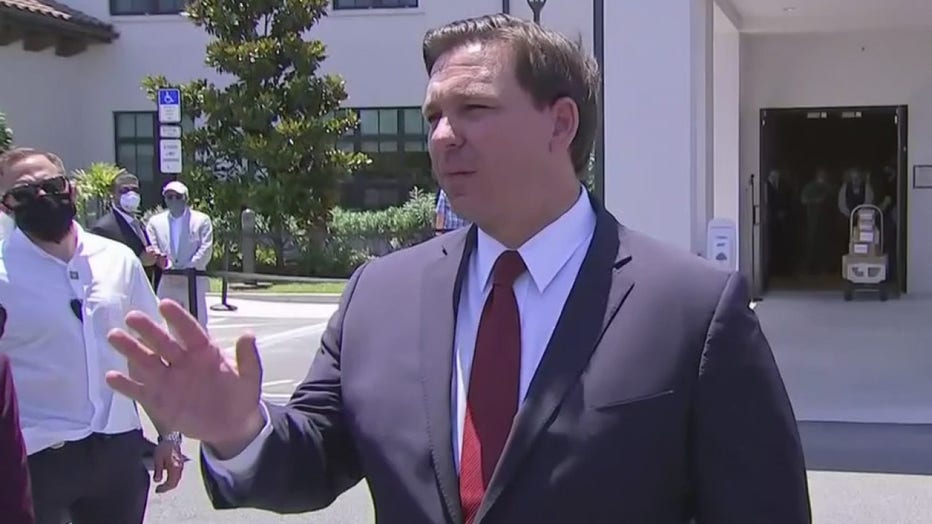 He continued to discuss the numbers reported by the Florida Department of Health, claiming that "our data is available, our data is transparent, in fact Dr. Birx has talked multiple times, about how Florida has the absolute best data."

He went on to reiterate that Florida has a low death rate, lower than several others in the southern region and that as a state, "we've succeeded. And I think that people just don't want to recognize it because it challenges their narrative. It challenges their assumption, so they got to try to find a Boogeyman, maybe it says there are black helicopters circling the Department of Health."

DeSantis has taken a series of steps this month to reopen the economy after businesses shut down or scaled back to prevent the spread of the virus.

Florida is currently in 'full phase one,' which allows the reopening of gyms, museums and libraries, as well as higher-capacity limits for businesses that were restricted to just 25 percent indoor capacity during the first couple weeks of Phase 1.

The latest numbers from the Florida Department of Health show that there have been 47,471 of coronavirus cases statewide, resulting in 2,096 deaths.