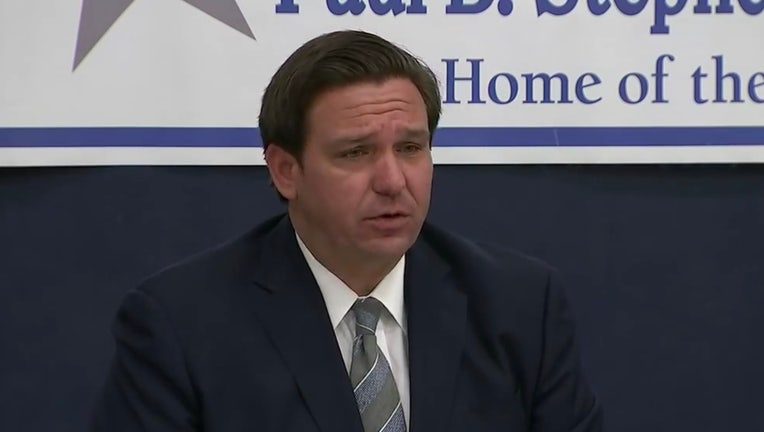 CLEARWATER, Fla. - Florida Gov. Ron DeSantis on Wednesday continued his push to reopen schools amid pushback from the state’s teachers union, as health officials reported a new record of COVID-19 deaths reported in one day.

Although his children aren't old enough, the governor said he would feel confident sending them to school for face-to-face learning.

“I would have no problem, and I would absolutely have, you know, my kids in school because I do think that it’s safe to do so. I believe that, because this is something that’s very low risk for kids,” DeSantis said.

He went to say, “My wife and I both would have a lot of confidence in having our kids in the school system and that will obviously happen, you know, as, as they get a little bit older. I know it’s a time where there’s a lot of anxiety out there. I think that having these choices hopefully can reduce some of that anxiety."

The governor and his wife First Lady Casey DeSantis have three small children: Madison, 4, Mason, 2, and Mamie, who is around 5-months old.

Still, DeSantis said parents should decide for themselves whether to send their children back into the classroom next month.

“We do believe fundamentally in providing parents with the choice. And that choice can be to continue with distance learning or to choose to go back into the classroom where students can get face-to-face instruction,” DeSantis said.

The state’s death toll from the coronavirus now stands at more than 6,330 after health officials added 216 additional casualties Wednesday. The number of confirmed cases in Florida stood at 9,446, with the cumulative tally of infections now more than 450,000.

“If we need to delay the year, then delay the year by a couple weeks,” the governor added. “I’d much rather have a successful school year that’s a couple weeks late, rather than kind of go into it and not be ready to handle the situations that may develop.”

The governor was joined by state Education Commissioner Richard Corcoran, who again asserted that current law requires school campuses to reopen for in-person instruction or risk losing some funding. President Donald Trump and U.S. Education Secretary Betsy DeVos have both threatened to withhold federal money for schools that do not reopen.

Parents and teachers who assembled on behalf of the governor echoed his call for getting students back in the classroom, arguing that specials needs students would especially benefit from face-to-face instruction.

The Florida Education Association, which includes unions representing teachers and other school employees, expressed concerns about the ability of schools to keep children and teachers healthy.

“Floridians don’t need more lectures or roundtables from our governor. We need a solid plan on how students and staff will be kept safe,” said association president Fedrick Ingram.

The association has sued the state to block the mandatory reopening of campuses. Ingram has noted that some school districts don’t have adequate plans to procure soap, hand sanitizers and protective masks. He also raised concerns about how schools will address infections among students and teachers.

The new numbers released Wednesday by health officials raised the average number of deaths reported daily to 142 over the past week. That’s second only to Texas overall, and to Arizona in per-capita deaths. The highest number of daily deaths reported in the U.S. on a seven-day average during the pandemic has been 760, in New York at the height of its outbreak in mid-April.