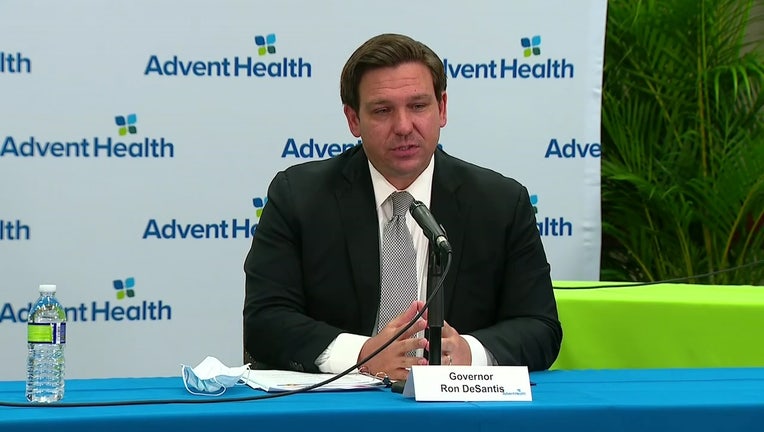 TALLAHASSEE - Floridians will get a chance to buy new specialty license plates, including three for out-of-state universities, while efforts to prevent shark “finning” got a boost Friday, as Gov. Ron DeSantis signed 14 bills into law.

DeSantis also vetoed a measure (HB 789) that would have imposed a $1 fee for people with developmental disabilities who chose to have the Department of Highway Safety and Motor Vehicles put the letter “D” on identification cards. He signed a related bill (HB 787) that authorized putting the letter “D” on the cards.

“I believe making this option available to our fellow Floridians with developmental disabilities is good public policy,” DeSantis wrote in explaining the veto. “However, imposing an additional fee could unnecessarily discourage a number of eligible Floridians from choosing this service designed to increase awareness and promote greater inclusion and participation in the community.”

Valerie Breen, executive director of the Florida Developmental Disabilities Council, said her group had mixed feelings about the legislation. While supportive of allowing people to identify themselves as having disabilities, Breen said a worry was that it could put a stigma on the population of people with disabilities.

The measures acted on Friday were the last of 206 bills, including a new state budget (HB 5001), that reached DeSantis from the 2020 legislative session, which ended March 19.

DeSantis vetoed five measures, including deciding last week to reject a controversial proposal (SB 810) that would have banned the sale of nearly all flavored electronic-cigarette products and raised the state’s smoking age from 18 to 21.

Among the new laws signed Friday was a long-sought change to the specialty license-plate program (HB 1135). The proposal was sold as adding new rules for the program, while expanding the potential number of tags from the current 123 to 150.

The law allows new plates to get on the road if supporters can meet higher sales thresholds, while some low sellers will be bumped. It allows plates for the University of Alabama, the University of Georgia and Auburn University, giving fans a chance to showcase their support for the out-of-state schools.

Kevin Cate, a Tallahassee-based public-relations and political consultant, and James Grant, a former state representative from Tampa who in August became the state’s chief information officer, started pushing for the out-of-state plates in 2016. Both went to Auburn.

After the bill was signed, Cate tweeted a video of the Auburn University Marching Band reacting to Chris Davis’ game-winning touchdown for Auburn against Alabama on the last play of the 2013 Iron Bowl.

“This video will also capture the moment we found out the bill was signed,” Cate tweeted.

A separate bill (HB 387) signed by DeSantis sets a standard $25 fee for most specialty license plates, with a $50 fee for the Alabama, Georgia and Auburn tags.

The shark finning measure (SB 680) expands on a 2017 law that increased penalties for people who remove fins from sharks and discard the rest of the sharks into the ocean.

The new bill bans the import, export and sale of shark fins, which are considered a delicacy in parts of Asia.

The proposal didn’t fully ease concerns of the commercial fishing industry, though it would allow people with federal shark fishing permits and seafood dealers that harvest and possess shark products to continue engaging in import and export trade involving shark fins through Jan. 1, 2025.