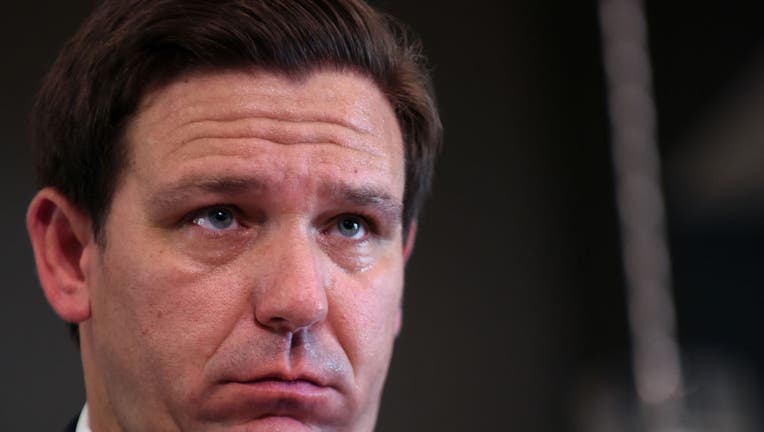 APOPKA, FLORIDA, UNITED STATES - 2020/07/17: Florida Governor Ron DeSantis listens to a question from the media at Wellington Park Apartments to announce the release of $75 million in funding from the CARES Act for local governments to provide rental

TALLAHASSEE, Fla. - After a similar proposal died last year, Gov. Ron DeSantis vowed Tuesday to pass a measure that would shield physicians from being disciplined for expressing views on issues such as COVID-19.

DeSantis made the measure a priority of a campaign-style event in Bay County, where he also said he would push during the upcoming session for proposals such as permanent bans on vaccine mandates and mask mandates in schools.

The governor, who is widely considered a potential 2024 Republican presidential candidate, continued his long-running criticism of the federal government and major medical organizations about issues such as vaccinations. He said doctors and other health-care professionals should be protected "with the freedom to be able to speak the truth."

"They (lawmakers) will pass it this year," DeSantis said. "I’ve already talked to the leadership."

DeSantis’ office did not release a detailed proposal. But bills filed during the 2021 legislative session would have said state regulatory boards could not "reprimand, sanction, or revoke or threaten to revoke a license, certificate, or registration of a health care practitioner for exercising his or her constitutional right of free speech," including on social media.

The 2022 bills did not specifically mention COVID-19, but they came as many medical organizations have backed vaccinations and masks — clashing with the views of people such as DeSantis, state Surgeon General Joseph Ladapo and some doctors.

House Minority Leader Fentrice Driskell, D-Tampa, criticized DeSantis after Tuesday’s announcement, pointing to more than 84,000 COVID-19 deaths in Florida since the pandemic started in 2020. She said DeSantis has become "the number one peddler of a dangerous message from the anti-vax establishment."

"Patients need a doctor to give sound medical counsel, not fringe political feels," Driskell said in a conference call with reporters.

The 2022 bills did not make it through House and Senate committees. The 2023 session will start March 7.

DeSantis, often accompanied by Ladapo, has made opposing COVID-19 mask and vaccine requirements a key part of his political brand. Ladapo joined him Tuesday, along with Republican Congressman Neal Dunn, who is a physician, and other health-care professionals who share DeSantis’ views on COVID-19 issues.

"The credentialed class through state medical boards and national certifying bodies threaten physicians like me who speak out against their outrageous proclamations," dermatologist Jon Ward said. "Physicians have to be free to debate public policy and give their patients individualized medical advice."

DeSantis also outlined a series of other proposals related to COVID-19. In part, they would make permanent laws that the Republican-controlled Legislature passed during a 2021 special legislative session.

Those laws included such things as prohibiting mask mandates and vaccination mandates in schools. If they are not made permanent, the prohibitions are slated to expire June 1, under the 2021 law.