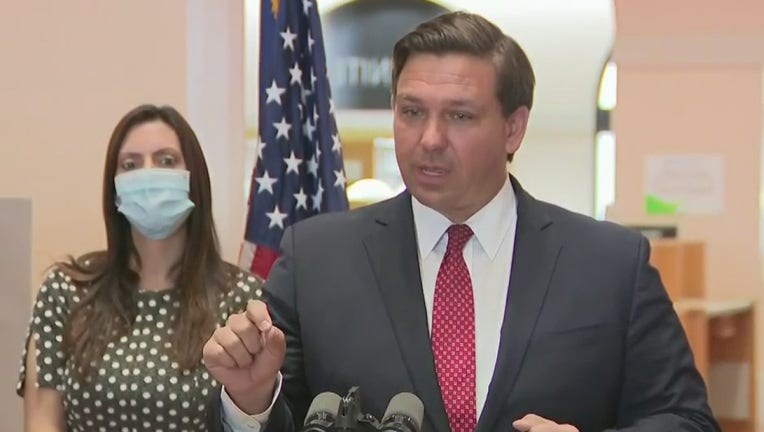 DeSantis addressed the issue Monday as $600-a-week federal unemployment benefits are slated to expire at the end of July and as Florida deals with a surge in coronavirus cases.

Amid debate about whether federal aid will be extended, DeSantis said he supports Congress structuring benefits that would provide a “financial premium” as an incentive to return to work. But he said the issue for the state is how many jobs are able to return from the economic shutdown.

“We obviously haven't had the job numbers yet, for our state in particular, but if you look at the national numbers, you know, we're obviously anticipating a positive increase here in Florida to be reflected from June,” DeSantis continued. “And then obviously, we want to continue to do that as we move forward and in a very safe way.”

Florida’s tourism-reliant economy saw its unemployment rate go from 13.8 percent in April to 14.5 percent in May, even while businesses started reopening amid the pandemic.

The jobless rate was based on an estimated 1.412 million Floridians out of work from a labor force of nearly 9.71 million. June numbers are slated to be released by the state on July 17.

DeSantis’ optimism came despite the state in late June having to order bars and nightclubs to close again because of widespread violations of guidelines aimed at preventing spread of the virus.

Also, on Monday, Miami-Dade County Mayor Carlos Gimenez announced that he was ordering the closure of restaurant dining rooms, gyms, and banquet facilities because of the surge of infections.

Governor DeSantis was in The Villages giving an update on COVID-19 in the state.

Meanwhile, the state’s economically critical theme parks have moved forward with reopening. Universal Florida has reopened with limited capacity and social distancing requirements, and Walt Disney World is slated to reopen the Magic Kingdom and Animal Kingdom on Saturday.

“Disney, I have no doubt it's going to be a safe environment,” DeSantis said. “I think that where you start to see the spread is just in social situations, where people let their guard down, usually like a private party or something like that. That's kind of what we've seen. But I think that the folks who put a premium on safety, that's showing you were able to handle this, have society function. We still want people going to work. But do it in a way that you take some basic precautions.”

Since March 15, nearly 2.85 million jobless applications have been filed in the state, with about 2.63 million considered “unique,” according to the state Department of Economic Opportunity. Of the unique claims, more than 2.4 million had been processed as of Sunday, with 1.6 million claimants paid. The state has distributed $8.8 billion in state and federal benefits, of which $2.08 billion was state money.