Hurricane Delta has made landfall in Louisiana along the same path where Hurricane Laura hit weeks earlier.

ORLANDO, Fla. - Hurricane Delta made landfall in southwestern Louisiana as a Category 2 storm Friday, compounding misery along a path of destruction left by Hurricane Laura only six weeks earlier.

The center of the hurricane blew ashore about 6 p.m. near the town of Creole with top winds of 100 mph (155 kph), pushing a storm surge that could reach up to 11 feet (3.4 meters), the National Hurricane Center said.

People in south Louisiana steeled themselves as Delta delivered bands of rain, strong winds and rising water as the storm neared landfall in a part of the state still recovering from a deadly catastrophic hurricane six weeks ago.

In the city of Lake Charles, about 30 miles (50 kilometers) inland from where Delta made landfall, rain pelted the tarp-covered roofs of buildings that Hurricane Laura battered when it barreled through in late August and killed at least 27 people in the state.

“It’s devastating and it’s emotional for the citizenry,” Mayor Nic Hunter said as he prepared to ride out the storm in downtown Lake Charles.

Lake Charles, Louisiana and coastal communities are preparing for the landfall of Hurricane Delta.

Forecasters reported 7 feet (2 meters) of storm surge east of Cameron, a sparely populated coastal community devastated by 2005′s Hurricane Rita and Hurricane Ike in 2008, and warned that some areas could see water reach 11 feet (3.3 meters) above ground along the Louisiana coast.

As Delta approached, winds picked up in inland areas such as Lafayette, where occasionally strong gusts buffeted trees and sheets of rain were falling. Many parishes and towns implemented curfews Friday until Saturday morning to encourage people to stay off the roads during the worst of the storm.

Dawn Trosclair checked into a hotel Friday, worried about trees falling on her home in Lafayette.

“No other storm really threatened us,” Trosclair said as she watched the gusting winds. “Laura was far enough away and the winds were going to be mild enough here where we didn’t leave.”

Laura damaged about 95% of the homes and buildings in Lake Charles, while up to 8,000 residents — 10% of the population — remain displaced, the mayor said. Piles of moldy mattresses, sawed-up trees and other leftover debris lined the city’s largely vacant streets Friday, arousing concern they could cause more damage and deaths when the new storm strikes.

So far, it has been a very active hurricane season, with Delta being the 25th named storm. 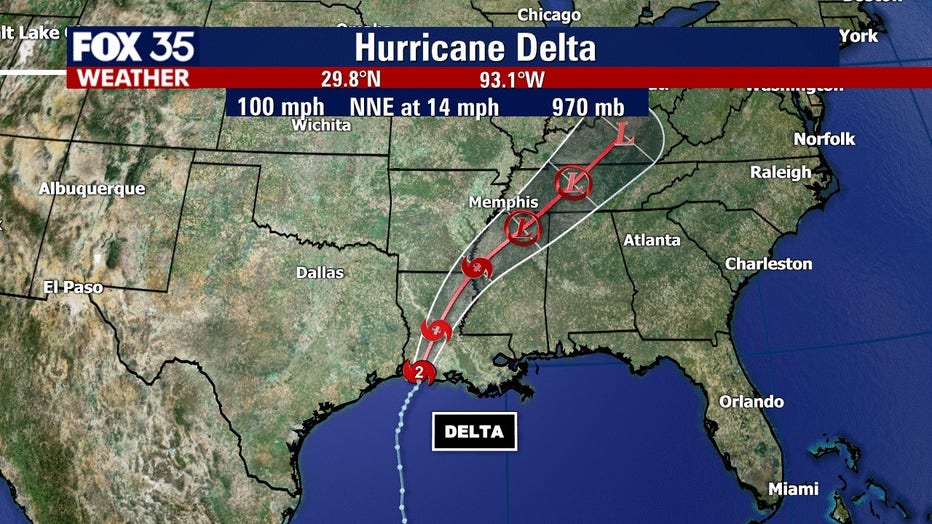 Tune in to FOX 35 Orlando for the latest updates on the tropics.