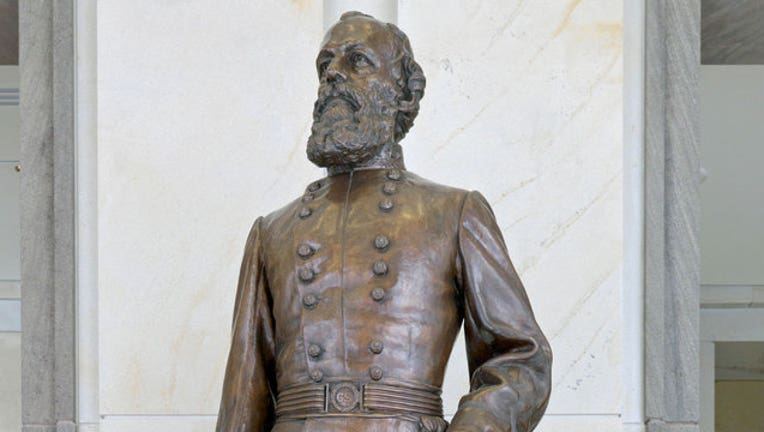 LAKE COUNTY, Fla. - Seeking to unify their community, Lake County commissioners want Governor Ron DeSantis to find a museum outside of their community to house the statue of a Confederate general who has represented Florida in the U.S. Capitol for nearly a century.

Amid a national debate over Confederate statues and memorials, county commissioners voted 4-1 on Tuesday to reverse support they gave almost a year ago, previously helping the Lake County Historical Society and Museum's effort to house a statue of Confederate Gen. Edmund Kirby Smith at a historic Tavares courthouse.

“I would just say what happens next is probably the big question. What can we continue to do to promote harmony in our community?” Commissioner Sean Parks said. “There's a lot of work that needs to be done. And I think we're playing a good leadership role here and doing this today.”

“I have spoken with Sen. Dennis Baxley, and we have talked about working to find a suitable location in a bipartisan manner for the statue of Gen. Edmund Kirby Smith, and I believe that we will be able to do that,” Thompson said, referring to an Ocala Republican senator whose district includes part of Lake County.

State lawmakers voted in 2016 to replace the Smith statue at the National Statuary Hall amid a nationwide backlash against Confederate symbols that followed the 2015 shooting deaths of nine black worshippers at a historic black church in Charleston, South Carolina. They later chose as a replacement a statue of civil-rights leader and educator Mary McLeod Bethune. Bethune in 1904 founded what became Bethune-Cookman University in Daytona Beach and later served as an adviser to President Franklin Roosevelt.

County commissioners have said the anticipated arrival of the Smith statue in Lake County has created divisions. In their reversal, they pointed to the St. Augustine-born Smith having no ties to Lake County and that the courthouse- turned-museum has a “tragic history” for the role it played in a case known as the Groveland Four.

“I think that we've learned a lot,” said Commission Chairwoman Leslie Campione, who voted in favor of accepting the statue last July. “And we'll take those lessons and we'll build on them.”

Campione also defended the historical society’s board of directors.

“They were looking at this strictly from a historical standpoint, and this is what they do, display and collect artifacts and try to tell the whole story,” Campione said. “I don't think there was anything about it that was intended to be mean or to intimidate or to perpetuate bad feelings.”

No one spoke in support of the statue coming to Lake County when the issue was brought up Tuesday.

Last year, the historical society’s board of directors said their pursuit of the statue was not an attempt to glorify Smith or the Confederacy. The board argued that when Smith was born, Lake County was part of St. Johns County, which includes St. Augustine. Lake County was founded in 1887.

The society intended to include in its display more than just the Smith statue, including information about Bethune’s achievements and the movement to remove Confederate monuments from public squares.

Thompson said “museums are not neutral.”

“Museums decide what story to tell,” Thompson said. “What to highlight. What to elevate.”

The historic courthouse is mostly known outside Lake County for being a part of the story of the Groveland Four, a case in which four African-American men were accused of raping a white woman in 1949. The case was the subject of the award-winning book “Devil in the Grove,” and the four men --- none of whom are still alive --- were pardoned by DeSantis and the state Cabinet in January 2019.

Tavares resident Frank Wood told the commission the decision to import the Smith the statue has hurt the county economically, citing that "with your vote to return the statue, Lake County can now be forward-looking and can concentrate on issues that improve the quality of life for all of today's Lake County citizens and for our citizens yet born."

Commissioner Josh Blake, who voted against a resolution and accompanying letter to DeSantis and Secretary of State Laurel Lee, asked for the letter to reflect his opposition. Last month, Blake deemed blocking the Smith statue from arriving in Lake County as censoring the decision of the local museum’s board and decried rejection of the statue as part of a national move targeting statues in public places.

“I think it's a mistake, and I think in context of what we're seeing with the vandalism of statues all across this country that have nothing to do with the Civil War, I think we're creating a terrible precedent,” Blake said on June 16. “Christopher Columbus has been thrown in the river in Richmond, has been beheaded in Boston. They're removing the statue of Abraham Lincoln in Boston. Where is this going to end? It's not going to end until somebody stands up to it.”

Commissioners agreed Tuesday the Smith statue should be placed in a museum, as it has served as one of Florida’s two representatives in the National Statuary Hall since 1922 --- just not the Lake County museum.Smith had few ties to Florida as an adult. As commander of Confederate forces west of the Mississippi, Smith was considered the last general with a major field force to surrender in the Civil War. He spent his later years as a college professor in Tennessee.