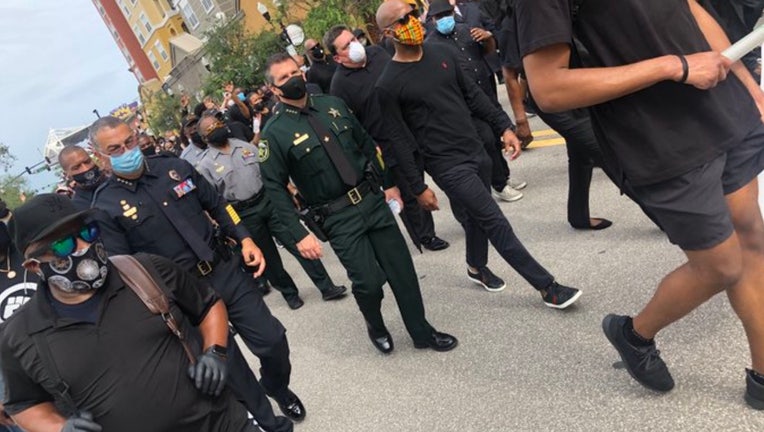 ORLANDO, Fla. - Below is a log of the day's events as it relates to the death of George Floyd.

3:00 a.m. – A judge set bail at $750,000 apiece Thursday for three fired Minneapolis police officers charged with aiding and abetting in the killing of George Floyd, as a memorial service took place just blocks away. Tou Thao, Thomas Lane and J. Alexander Kueng made their first appearances in Hennepin County District Court as friends, relatives and celebrities gathered to memorialize Floyd at a nearby Bible college. Read more HERE.

4:00 a.m. – Friends, family, and much of the community said goodbye to George Floyd at a memorial service in Minneapolis on Thursday, the first of three memorial services for Floyd before his funeral in Houston next week.

5:15 a.m. – A driver was pulled out of her vehicle during a traffic stop by a deputy with the Orange County Sheriff's Office, during which the deputy shattered the driver-side window of the car. The incident is said to have occurred around 7 p.m. Wednesday evening, following a peaceful protest near Curry Ford Road and Chickasaw Trail related to the death of George Floyd.

6:45 a.m. – Protesters in Orlando will gather again on Friday and through the weekend, calling for justice amid George Floyd's death. The Orlando World Outreach Center has organized a walk on Friday starting at 9 a.m. "to mourn the innocent black lives lost due to police brutality and social injustice." The walk begins at Camping World Stadium, proceeding down Church Street to Division Avenue.

7:00 a.m. -- One of the police officers arrested and charged with aiding and abetting the murder of George Floyd was on his fourth day on the job when the incident occurred. Details HERE.

7:50 a.m. -- Protesters will be back out at City Hall in downtown Orlando on Friday. Organizers say they will be there every day until their demands are met.

9:30 a.m. -- Groups dressed in black are peacefully walking from Camping World Stadium to Division Street in honor of George Floyd.

10:30 a.m. -- Orange County Sheriff John Mina and other deputies walked alongside groups participating in the Walk of Mourning & Restoration on Friday through downtown Orlando. He took time to speak to the crowd who want justice for George Floyd.

12:00 p.m. -- The D.C. Department of Public Works is painting the words Black Lives Matter on a street in downtown D.C. ahead of what is expected to be one of the largest rallies in the nation's capital in response to the killing of George Floyd.

12:30 p.m. -- Twitter has blocked a Trump campaign video tribute to George Floyd over a copyright claim, in a move that adds to tensions between the social media platform and the U.S. president, one of its most widely followed users.

1:45 p.m. -- Negotiators for the city of Minneapolis have agreed with the state to ban the use of chokeholds by police and to require police to report and intervene anytime they see a unauthorized use of force by another officer.