Sally was downgraded to a Tropical Storm after making landfall early Wednesday. We continue to monitor other systems churning in the Atlantic Ocean.

ORLANDO, Fla. - Sally made landfall early Wednesday on the Gulf Coast as a Category 2 hurricane and has since brought "catastrophic" and "life-threatening" flooding to portions of the Florida Panhandle and southern Alabama, the National Hurricane Center (NHC) said.

FOX 35 News is tracking several other storms in the very busy Atlantic as well.

Sally made landfall near Gulf Shores, Alabama early Wednesday morning as a Category 2 hurricane with maximum sustained winds of 100 mph. 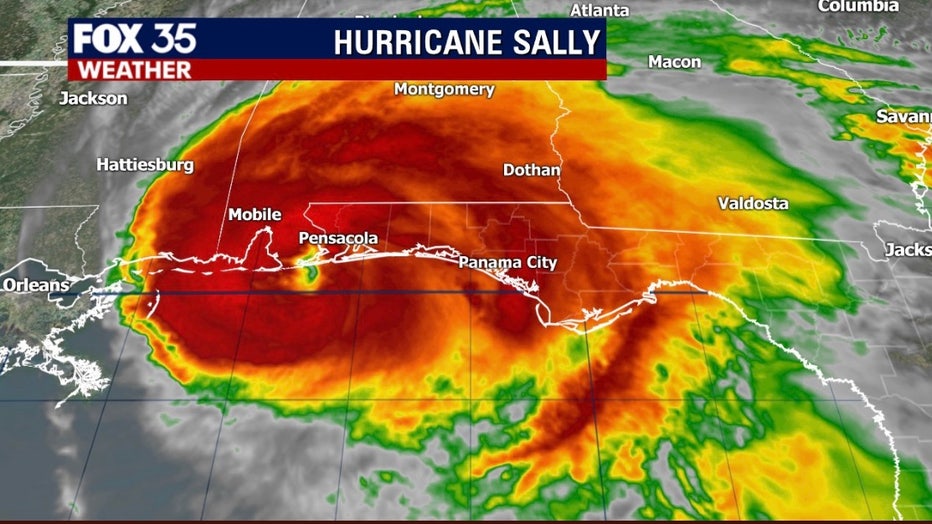 Maximum sustained winds have since decreased to 70 mph, making it a tropical storm again. The hurricane is moving north-northeast at 5 mph and is said to be about 30 miles north-northeast of Pensacola, Florida. Sally is expected to weaken more as it moves farther inland. It should be a tropical depression by Thursday.

Forecasters said catastrophic and life-threatening flooding is likely from Sally in portions of the Florida Panhandle and southern Alabama.

"Life-threatening storm surge is occurring along portions of the coastline from Alabama to the western Florida Panhandle," the NHC said. "On the forecast track, the center of Sally will move across the extreme western Florida panhandle and southeastern Alabama through early Thursday, and move over central Georgia Thursday afternoon through Thursday night." 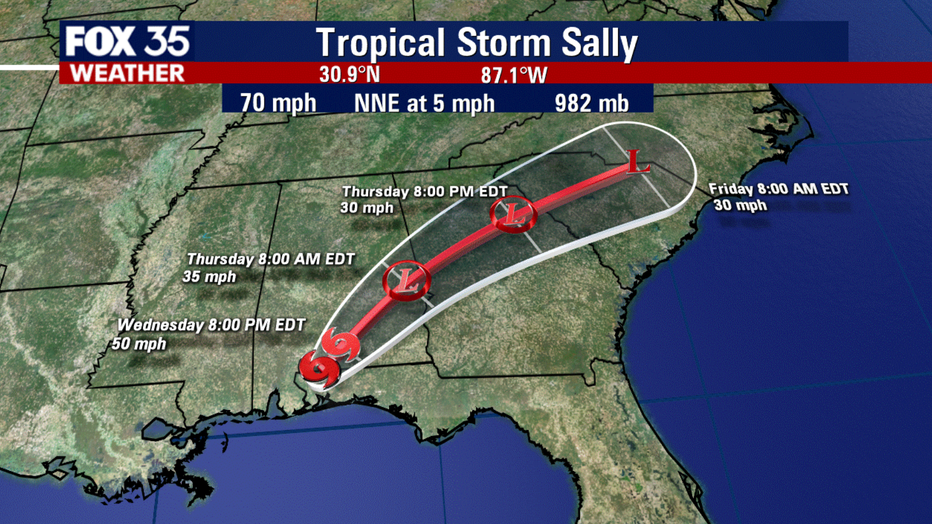 Governor DeSantis is warning those in the Panhandle that "what will happen is as this storm continues to move past places like Pensacola and goes north, the water that it drops north of the Panhandle is also going to impact floods that could happen several days from now."

He said that "this is not something that's just going to be a one- or two-day thing. People are going to have to be vigilant for several days.”

Nearly 332,000 homes and businesses had lost electricity across Alabama, Florida, and Louisiana by Wednesday morning, according to the poweroutage.us site. The site says about 192,000 of those outages were in Alabama while more than 78,000 were in Florida.

Meanwhile, Teddy is located about 775 miles east of the Lesser Antilles. It is currently a CAT 2 hurricane with maximum sustained winds of 100 mph, the NHC said.

Some strengthening is forecast during the next few days and Teddy is likely to become a major hurricane by late Wednesday. It could then reach Category 4 strength on Thursday. 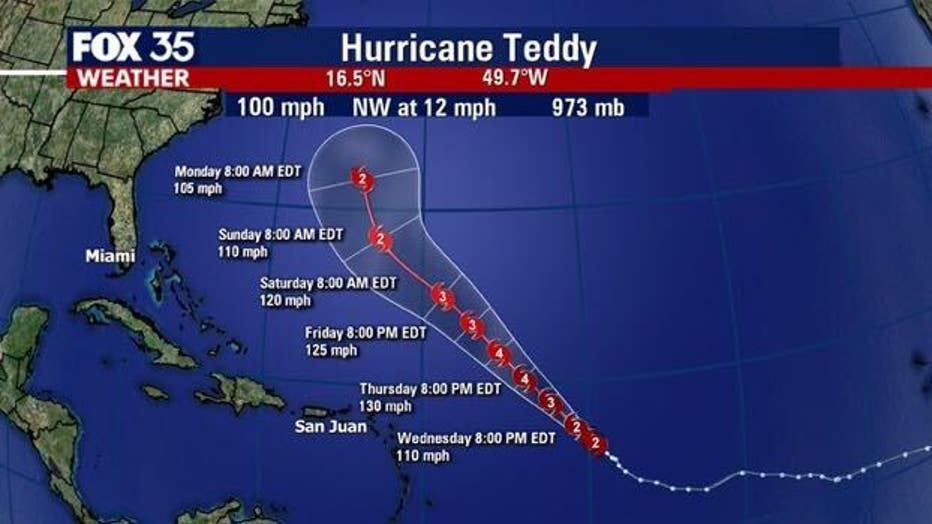 Paulette is now a strong extratropical cyclone and continues to swirl in the Atlantic. The NHC said that it has maximum sustained winds of 85 mph and that further weakening is forecasted over the next few days. 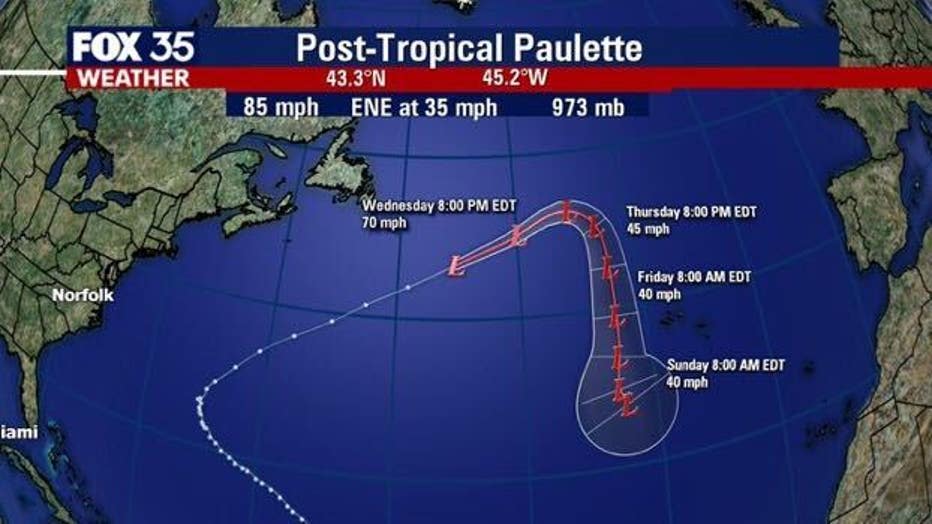 Vicky is reportedly located about 795 miles west-northwest of the Cabo Verde Islands. It is moving toward the west-northwest near 9 mph. It is said to have maximum sustained winds of 40 mph. Additional weakening is forecasted. It should become a tropical depression on Thursday and then a remnant low on Friday, eventually dissipating on Saturday. 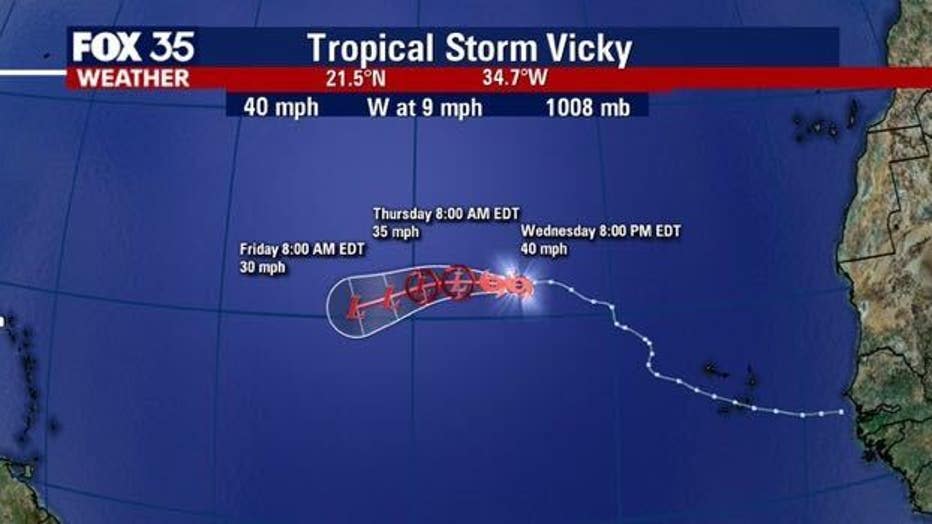 There are three other disturbances being monitored by the NHC. 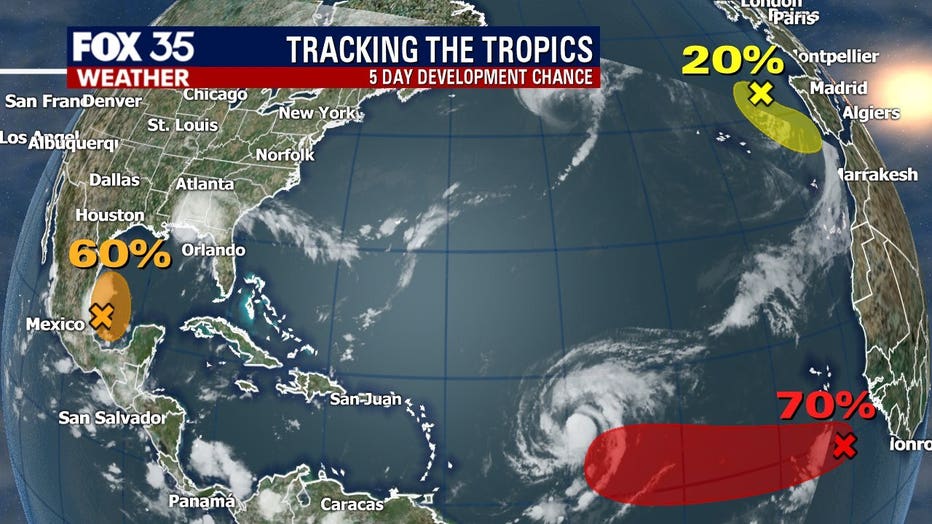 They said that an area of low pressure over the southwestern Gulf of Mexico is producing showers and thunderstorms. These have become a little better organized on Wednesday and development is 60 percent likely over the next five days. They expect it to be a tropical depression later this week or over the weekend.

There is also a disturbance a few hundred miles south-southeast of the Cabo Verde Islands. Showers and thunderstorms are associated with an area of low pressure there and environmental conditions are conducive for further development. The NHC said that it has a 70 percent of development over the next five days. A tropical depression is likely to form over the next few days while the system moves generally westwards at 10 to 15 mph.

Finally, there is a third disturbance -- a non-tropical area of low pressure -- over the northeastern Atlantic Ocean, a few hundred miles northeast of the Azores. The NHC said that it only has a 20 percent of development over the next five days.

Stay with FOX 35 for the latest updates during this very active hurricane season.