Subtropical Storm Nicole could reach hurricane strength before it makes landfall on the eastern coast of Florida mid-week, according to the FOX 35 Storm Team and National Hurricane Center.

LAKE MARY, Fla. - The disturbance in the Atlantic Ocean strengthened to become Subtropical Storm Nicole overnight, which could reach hurricane strength before it makes landfall on the eastern coast of Florida mid-week, according to the FOX 35 Storm Team and National Hurricane Center.

Where is Subtropical Storm Nicole located?

"On the forecast track, the center of Nicole will approach the northwestern Bahamas on Tuesday and Tuesday night, move near or over those islands on Wednesday, and approach the east coast of Florida Wednesday night," the NHC said in its Monday afternoon advisory. 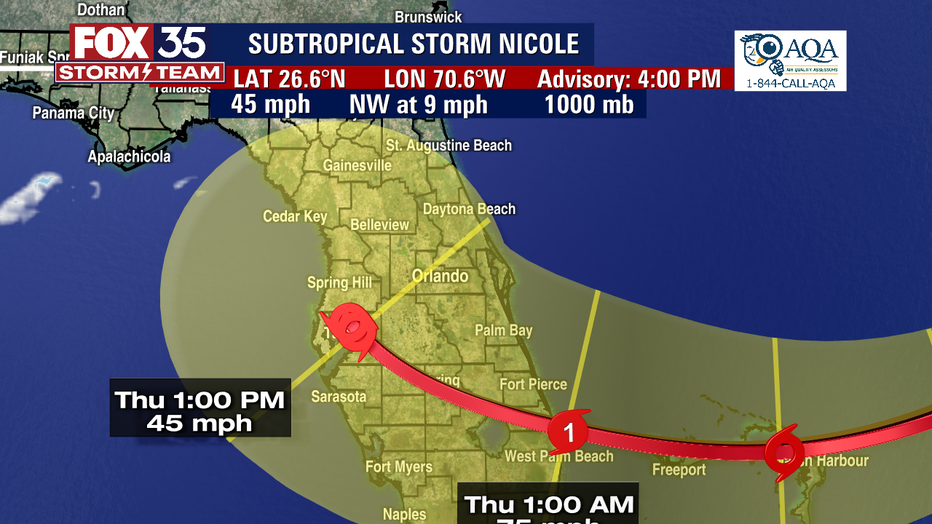 A Hurricane Warning has been issued for:

A Hurricane Watch has been issued for:

A Storm Surge Watch has been issued for:

A Storm Surge Warning has been issued for:

A Tropical Storm Watch has been issued for: 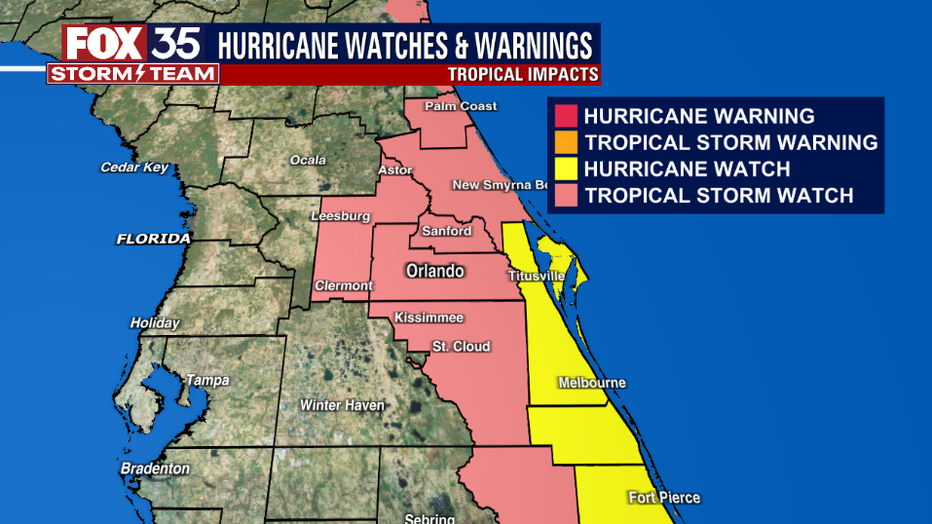 Nicole is forecast to be a large storm, and regardless of its exact path, the NHC said. Coastal flooding, tropical-storm-force winds, heavy rainfall, rough surf and rip currents and beach erosion are likely along the Florida east coast, the southern United States coast and portions of the northwestern and central Bahamas during much of the upcoming week.

There is a possible risk for severe weather on Wednesday as the storm approaches the east coast of Florida. Local impacts could include strong winds, heavy rain, beach erosion, a Coastal Flood Watch, and the potential for power outages. 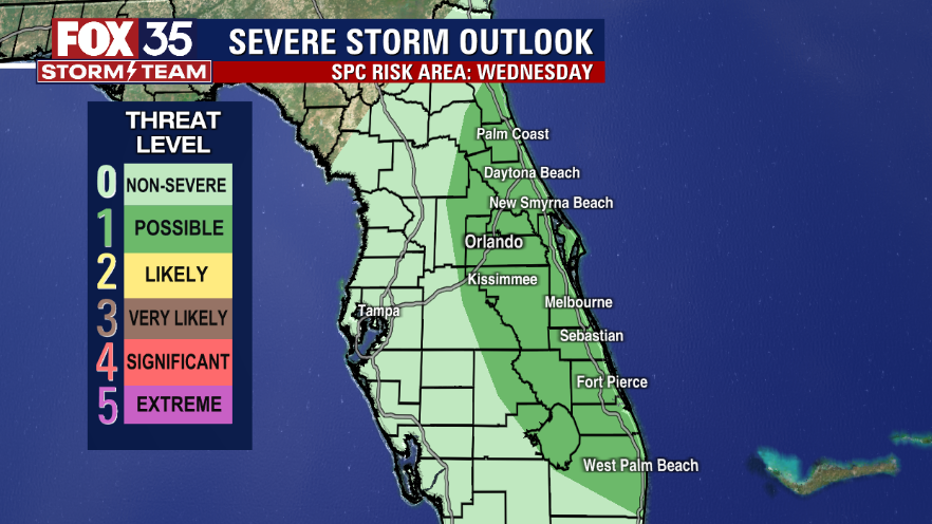 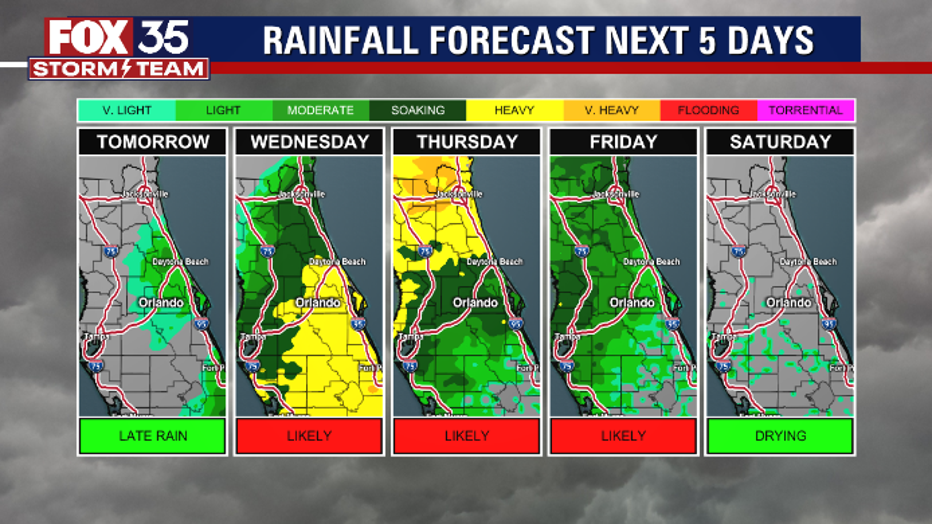 Here are the potential impacts along the St. Johns River: 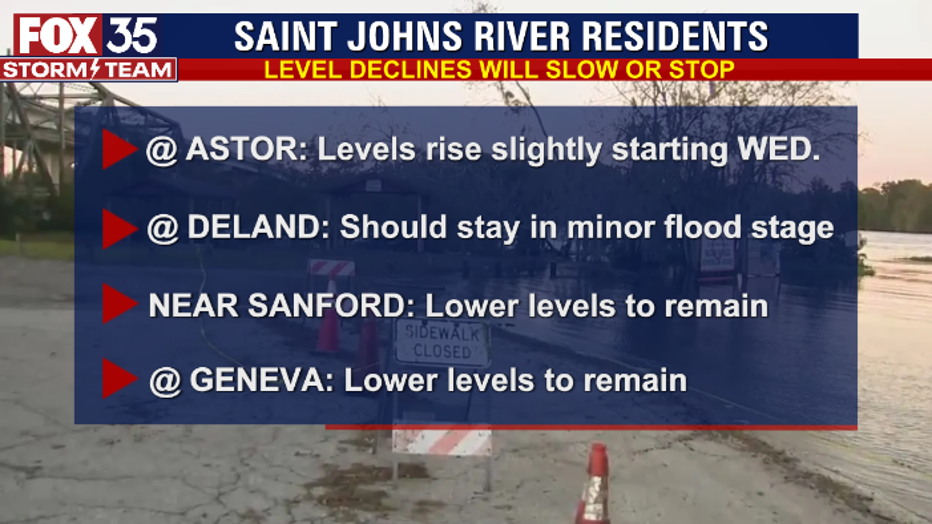 Beginning on Tuesday, The FOX 35 Storm Team said our area will begin to see increasing winds and late showers. The strongest winds will arrive on Wednesday through Thursday and beach conditions will worsen. On Friday, the system will begin to exit our area, though heavy rain and winds will continue.

"This is not going to be the week to head out to the beach," FOX 35 Storm Team Meteorologist Allison Gargaro said. Coastal hazards at the beaches beginning Monday night through Friday evening include high rip current risk as well as a Coastal Flood Watch at all Atlantic side beaches. 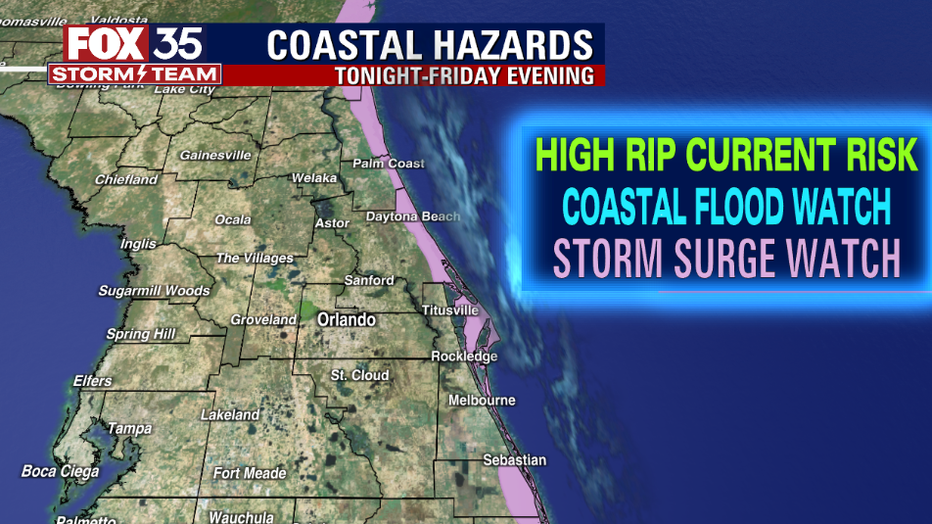 "If you do live along the beach, make sure you get sandbags, have all your preparations. We could be seeing power outages Thursday into Friday, so make sure that you are charging up all of your devices," Gargaro added. 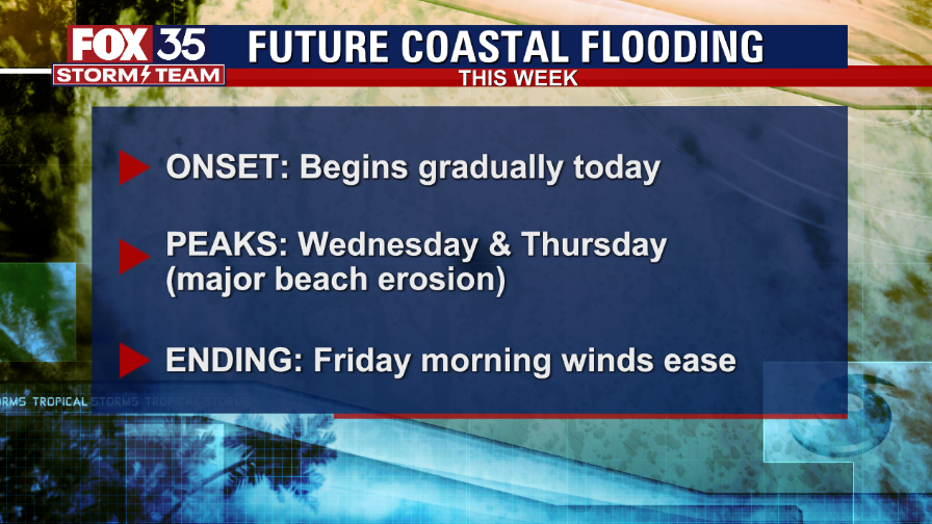 As Nicole moves through the Central Florida area, here's a look at the tropical storm wind potential it will bring Florida on Wednesday morning and evening and Thursday afternoon:

The FOX 35 Storm Team will continue to monitor Nicole and will share any new developments and impacts for the Central Florida area as soon as details are available.

Nicole is the 14th named storm of the 2022 Atlantic Hurricane Season, which runs through Nov. 30.