TAMPA, Fla. - After ten months as the top cop in Tampa, Chief Mary O'Connor has resigned after body camera footage surfaced showing her flashing her badge to a Pinellas County deputy during a traffic stop. With her husband behind the wheel of the golf cart, she asked the deputy to "let us go."

"I never want my personal mistake to stand in the way of the progress I have made in mending relationships between the police department and the community, so for that reason, I am resigning," her letter said in part.

"It is unacceptable for any public employee, and especially the city's top law enforcement leader, to ask for special treatment because of their position. Public trust in Tampa's police department is paramount to our success as a city and community," Castor said in a statement. "This is especially disappointing because I gave Mary O’Connor a second chance, as I believe in second chances for people. Which is one of the reasons that the disappointment today runs so deep."

"I had high hope for Chief O’Connor," she added. "She was off to such a strong start by reducing violent gun crime, proactively engaging with our community, and focusing on officer wellness. But these accomplishments pale in comparison to the priority I place on integrity."

The mayor sat for a one-on-one interview a few hours after accepting O'Connor's resignation.

"I don't know if betrayal is the word, but disappointment," Castor told FOX 13.

She said she gave O'Connor a second chance after a contentious selection process that highlighted O'Connor's leadership skills, but also her arrest from 1995 after which the rookie cop was fired and reinstated for battering a Hillsborough County sheriff's deputy during a traffic stop.

"I think that she was a good choice, and I provide those second chances," said Castor. "You can never know what decisions individuals are going to make down the road. Clearly she made a very poor decision."

A Pinellas County deputy pulled over Tampa Police Chief Mary O'Connor and her husband back on November 12. They were riding in a golf cart without a license plate outside a residential area in Oldsmar, the police department said. Body camera video from the incident was released by TPD.

According to investigators, Mary O'Connor and her husband were riding in a golf cart without a license plate outside a residential area in Oldsmar on Nov. 12. They were outside a golf cart-friendly neighborhood when they were stopped, along East Lake Road and Woodlands Parkway around 7:24 p.m. The deputy's body camera was rolling during the encounter.

In the video, the deputy explains to the couple that they were pulled over for an unregistered golf cart. O'Connor is also seen showing her badge.

"Is your camera on?" she asked.

Moments later, the deputy is heard saying, "All right, well, take care and it was nice meeting you."

Then O'Connor handed the deputy her business card.

"If you need anything, call me. I'm serious," she said. 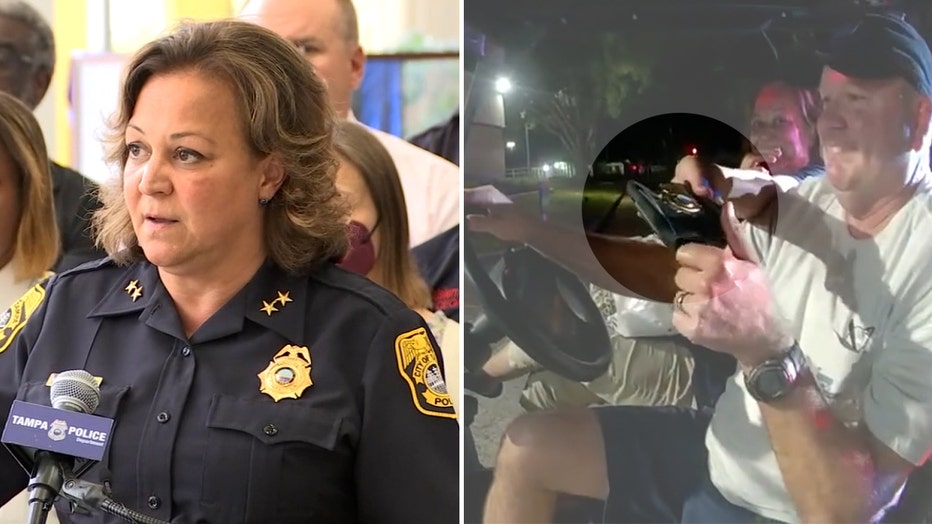 When asked to comment on the incident, Pinellas County Sheriff Bob Gualtieri told reporters, "Deputy Larry Jacoby did absolutely nothing wrong. I stand by him 100%. The person who did wrong was Mary O'Connor."

Gualtieri said the video showed that while O'Connor "asked for a favor," Jacoby did not give her one.

Of the 91,000 traffic stops conducted so far this year by Pinellas deputies, just 16,000 have resulted in traffic citations, according to Gualtieri. Most stops end with warnings, he said.

"It's a golf cart, they were about 100 yards from their gated community," the Pinellas sheriff said. "The outcome wouldn't have been any different if she had just kept her mouth shut… That's a warning all day long."

He added that O'Connor seeking special treatment was "unethical, it's wrong, and she's paying the consequence for that."

On Sunday, the investigation by the department's professional standards department was completed, finding that O'Connor violated the standard code of conduct and abused her position as the chief. The final disposition report was signed by Bercaw, the acting police chief.

"Chief O'Connor used her official position and her badge for obtaining privileges, not otherwise available, in an attempt to avoid the issuance of a traffic citation," the report stated. "The actions compromised the professionalism, ethics, and objectives of the Police Chief and the City of Tampa."

Mayor Castor says they'll look nationwide for a new chief, as they did last year.

"We will ensure that the community is involved, city council, that everyone has the ability to meet the candidates as we did before," Castor said.

New interim chief Lee Bercaw sat with the mayor during her interview with FOX 13, and indicated he would be interested in the top job. But his current focus is providing leadership.

"Officers know their integrity and ethics, and what happened here is a constant reminder of the professionalism and ethics they have to maintain," Bercaw said.

In January, the city of Tampa announced its top three candidates for the police department's next chief following a nationwide search: O'Connor, Assistant Chief Cherise Giordani Gause of the Miami Police Department, and Ruben "Butch" Delgado, who was serving as the interim police chief. He later retired after O'Connor was sworn-in.

In February, Mayor Castor appointed O'Connor as the next chief of police. The two worked together at TPD for more than a decade. Since her appointment, controversy built up among city councilors and the public leading up to the council's vote to approve the nomination.

O’Connor’s past was called into question following her appointment. In 1995, she was fired from the department after she was charged with punching a Hillsborough County Deputy during a DUI stop that involved her eventual husband.

During her time with the police department, O’Connor dedicated the first 22 years of her career to serving Tampa and the people who call it home. She worked her way through the Tampa Police Department and retired as the assistant chief in 2016.

"I knew from a young age that this was my calling," O'Connor said after she was introduced as the next police chief in February. "I believe in this community and in this department. Together, we can do great things."

Back in March, the Tampa City Council approved Mary O’Connor as the city’s top cop after 50 speakers voiced their opinions for and against her appointment.

Councilman Carlson touched on O'Connor's controversial past when FOX 13 reached out to him on Friday:

"When we interviewed her, she said, ‘What happened in the past is in the past, and it won’t happen again,’ and so I’m surprised that something similar happened again because she promised us that it wouldn’t… Then [she] asked for a favor, and at the end gave her business card and said, ‘If you need something, let me know, seriously’ which implies special privilege for certain people and I don’t think that represents the hard-working men and women of our police force.