The Polk County Sheriff's Office is calling out social media and gaming platforms to do better when it comes to monitoring threats of mass violence by its users. A 17-year-old gamer on Discord is accused of making violent and disturbing online threats to kill and stab multiple people.

WINTER GARDEN, Fla. - Investigators in Florida have arrested a 17-year-old gamer who they say made violent and disturbing online threats to kill and stab multiple people.

Polk County Sheriff Grady Judd said in a news release that tips from users of the Discord text-chat site led detectives to the teen, who was arrested Wednesday. Judd read from excerpts of the alleged threat.

"Let's start with this, 'I want so many people to die by my hand and then play with their guts while they're still alive,'" he read.

Officials said the teen wrote that he was "going to kill so many people," adding that he wanted to stab people and "make them hurt." Another text said he gets happy when he imagines himself "being a villain going on a mass-murdering spree like in a movie."

Deputies say they traced this back to the teenager who admitted to making the threats after becoming jealous of other gamers.  The comments were flagged by moderators on the chat app for gamers. Judd said the other gamers spoke up.

"The community did what they're supposed to. They immediately called," Judd said. 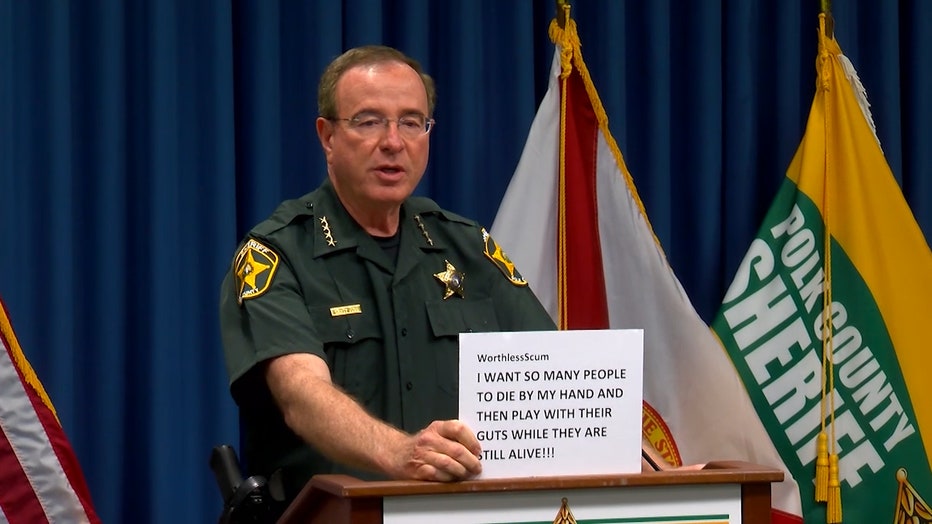 The sheriff said his agency had to go through several other social media outlets trying to track the teen down, including contact with Discord.

"It was four days until they responded to us, despite us sending the subpoena and saying, we've got someone who's talking about mass murder," Judd explained.

Judd's message to the platforms is to start getting serious about threats.  To parents, he said you should know what your kids are doing on those apps.

"You should never let your children on any app if you're not monitoring it."