Jury sentences Parkland shooter to life in prison without parole

FORT LAUDERDALE, Fla. - A jury spared Parkland school shooter Nikolas Cruz from the death penalty Thursday for killing 17 people at Marjory Stoneman Douglas High School in 2018, sending him to prison for the remainder of his life in a decision that left many families of the victims angered, baffled and in tears.

"This is insane. Everyone knows right? This is insane," Chen Wang, cousin of shooting victim Peter Wang, said at a news conference after the jury’s decision was read. "We need justice."

One by one, the family members of the victims walked up to the podium to give their statements after the verdict, all of them expressing shock and anger that the jury voted against the death penalty.

He continued, "What were you thinking? This isn't about your personal beliefs. It's not about your religious values. It's about the heinous crime that was committed."

Fathers, mothers, cousins and other loved ones of those who were murdered in the 2018 Parkland school massacre gave emotional reactions immediately after a jury decided to recommend life in prison without parole for Nikolas Cruz.

Fred Guttenberg, whose 14-year-old daughter Jaime was also one of the 17 victims murdered by Cruz, said the verdict was a setback for school safety.

"This decision today only makes it more likely that the next mass shooting will be attempted," he said.

Michael Schulman, the stepfather of teacher Scott Beigel, said the decision gives anyone a license to kill, then claim mental illness as a defense. "This animal deserves to die. He hunted all of these people," Schulman said. "He planned it for months."

As he spoke to the media, Schulman held up a laptop with an image of Cruz in the school hallway with a gun. "The last thing my son saw was the gunman aiming at him," he said.

Debra Hixon, the wife of school security guard, coach and athletic director Chris Hixon, said she was "completely devastated and shocked" by the verdict. Chris, an Iraq War veteran, was on patrol there the day Cruz opened fire on campus.

Hixon grabbed a golf cart and went speeding toward the sound of gunfire. His first reaction was to protect students and stop the carnage. Accounts from survivors say he attempted to disarm Cruz, who was firing into defenseless crowds of students and teachers. His devotion to the students he loved cost Hixon, a father of two, his life.

Moments after the jury recommended life in prison for Nikolas Cruz, the parents of Alyssa Alhadeff, a 14-year-old girl who was one of the 17 shooting victims, spoke, saying they are disappointed with the verdict. "The jury let us down. They didn’t go by the evidence," said Dr. Ilan Alhadeff.

"Right now, it feels like [Cruz's] life is more important than Christopher’s," Debra Hixon said. "His life meant more than the 17 that were murdered."

Jury foreman Benjamin Thomas told WFOR that three jurors ultimately voted for life in prison, with one of them being a "hard no" on the death penalty and another two ultimately choosing to vote against it as well.

"It didn't go the way I would've liked or the way I voted but that's how the jury system works," Thomas said. "We went through all the evidence and some of the jurors just felt that was the appropriate sentence, I didn't vote that way so I'm not happy with how it turned out, but everybody has the right to decide for themselves. It is a moral decision on their own; some of the jurors just felt that way."

He said the jurors reached their decision Wednesday, then went home to sleep on it before bringing it to the judge on Thursday morning.

Thomas said he feels bad for the families of victims and that "it hurt" to watch the decisions being read in court. "There’s nothing we could do. It’s the way the law is. And that’s how we voted," he said. 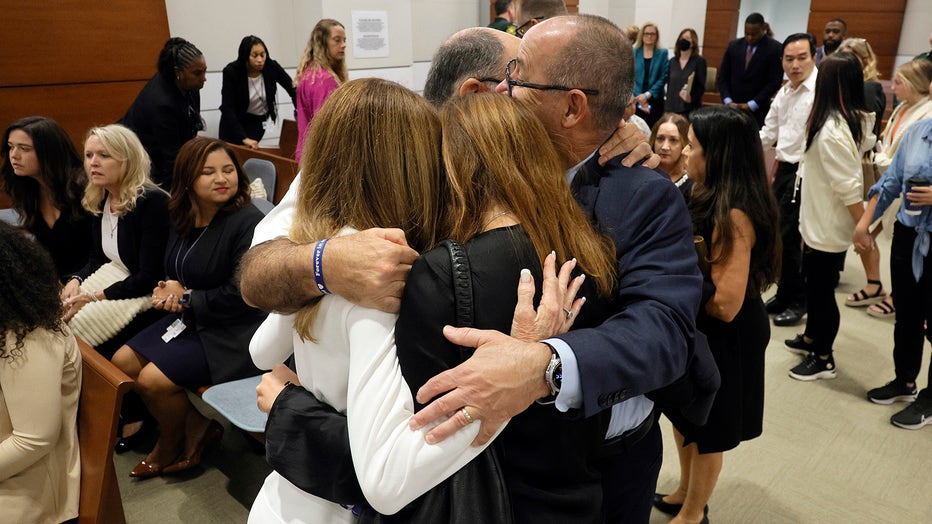 Linda Beigel Schulman, Michael Schulman, Patricia Padauy Oliver and Fred Guttenberg embrace as families of the victims enter the courtroom for the verdict in the penalty phase of the trial of Marjory Stoneman Douglas High School shooter Nikolas Cruz

"This has been really hard on my heart … I’d rather not see anything like this ever again."

"There was a time in Florida where a majority rule on the jury could have sustained a death penalty," said Craig Trocino, an associate professor of clinical legal education at the University of Miami School of Law and the director of the Innocence Project. "In 2016, the United States Supreme Court, in a case called Hurst versus Florida, ruled that that scheme was unconstitutional and then mandated that everything be unanimous. That's why we now have the unanimous verdict in Florida in death penalty."

Tampa attorney Anthony Rickman said the case shows how tough death penalty cases are to get all 12 jurors to agree to death.

"Nine jurors, in my opinion, got it right. They voted for death. It was the three holdout who voted for life that ultimately spared Nikolas Cruz's life," said Rickman, of Rickman Law Firm. "When you see that, all you need is one. It shows you how hard it is to actually send somebody death here in the state of Florida now. And that's due in part to the change of law and also just the change in society. We've seen public opinion polls show that more people are against their party now than ever before. And what we see now is jury verdicts showing that."

Polk County Sheriff Grady Judd, who served on the Marjory Stoneman Douglas Safety Commission, addressed the verdict in the Parkland school shooter trial, blasting the jury's decision to reject the death penalty and instead sentence Nikolas Cruz to life in prison.

Attorneys said there can’t be a retrial since the jurors gave Cruz life without parole, but legal experts said it can spark a conversation about who has access to guns and the death penalty.

"We can disagree with it. We can have issues with it. But we have to respect that because that's the law," said Trocino.