The storm's winds weakened to 50 mph sustained, with higher gusts. Those top winds have already been felt in various communities along the Delaware and New Jersey coasts, and nearly 6 inches of rain has fallen in some areas. 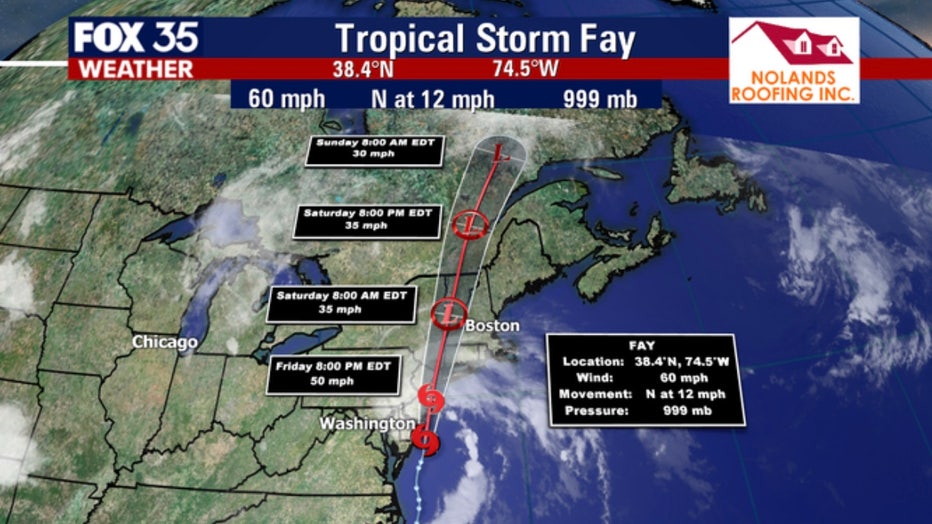 The low-pressure system became a tropical storm Thursday off the coast of North Carolina and is still moving to the north, now at a pace of 14 mph, up from 10 mph earlier this morning. The minimum pressure has remained mostly steady at 998 Mb.

Sustained winds of 60 mph were reported Friday morning by reconnaissance aircraft that located the storm's center. Tropical-storm-force winds were extending outward up to 140 miles from the storm's center for most of the day but reached up to 185 miles away -- mainly to the northeast and southeast of the center-right around the time of landfall.

The storm should weaken down to a tropical depression by early Saturday morning.

Fay is the earliest sixth-named storm on record, according to Colorado State University hurricane researcher Phil Klotzbach. The previous record was Franklin on July 22, 2005, Klotzbach tweeted.

Two named storms formed before the official June 1 start of the hurricane season. None of this season’s previous five named storms strengthened into hurricanes.