ORLANDO, Fla. - Tropical Storm Nicole is expected to become a hurricane on Wednesday ahead of its projected landfall in the state, according to the National Hurricane Center.

As of Wednesday afternoon, Nicole is brining a dangerous storm surge and strong winds to the Grand Bahama Island in the Bahamas with maximum winds of 70 mph. Nicole is near hurricane strength and is expected to make landfall in Florida as a Category 1 storm. 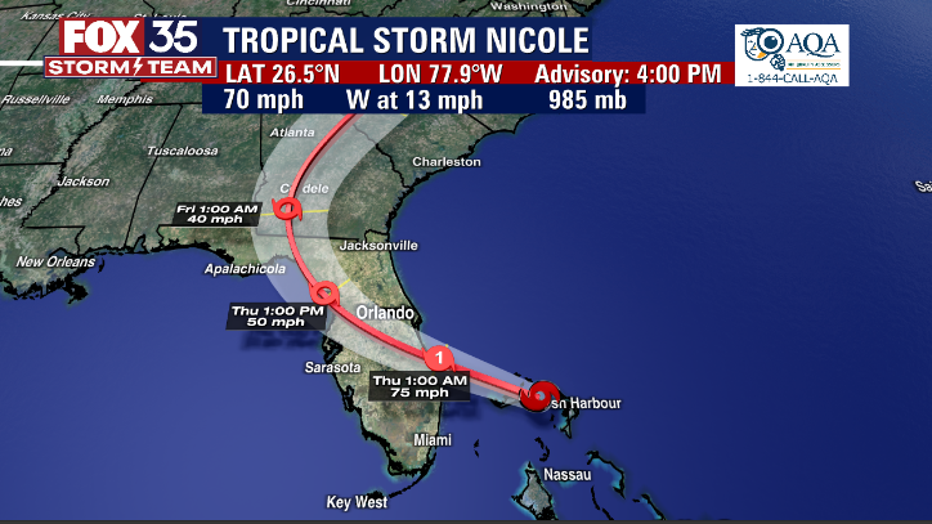 "Onthe forecast track, the center of Nicole will move near or over Grand Bahama Island in the northwestern Bahamas this afternoon and evening, and move onshore the east coast of Florida within the hurricane warning area tonight," the NHC said. " Nicole's center is then expected to move across central and northern Florida into southern Georgia Thursday and Thursday night, and into the Carolinas Friday. " 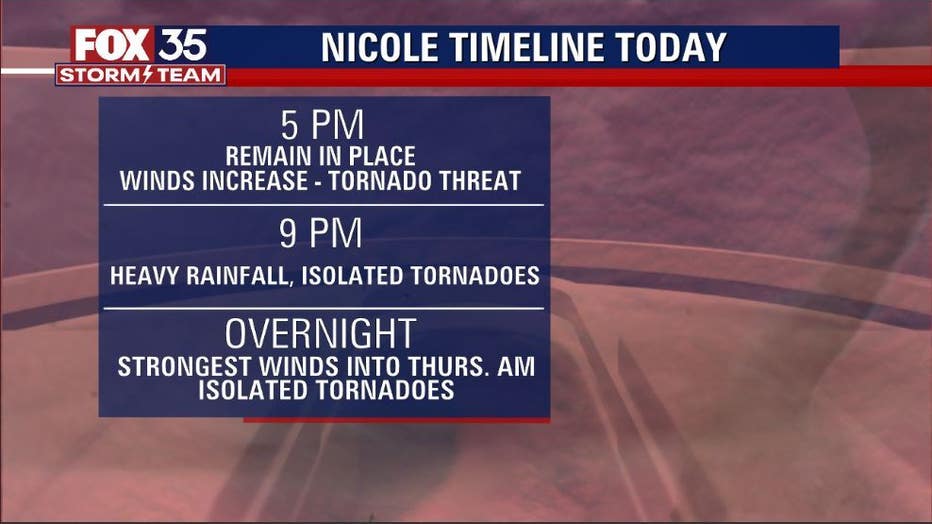 As of Wednesday afternoon, here is the timeline for Nicole impacts in the Central Florida area. 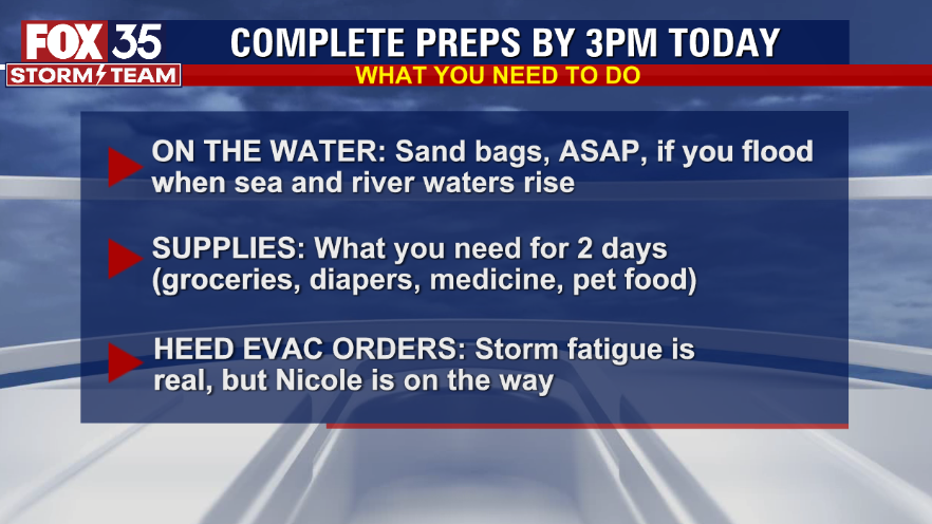 Tropical Storm Nicole: Here's what time you should be indoors

The combination of a dangerous storm surge and the tide will cause normally dry areas near the coast to be flooded by rising waters moving inland from the shoreline. Central and northern portions of the Florida Peninsula could get up to 3 to 5 inches and even 8 inches in some areas. A few tornadoes are possible this evening through Thursday across eastern Florida, southeastern Georgia, and southern South Carolina. 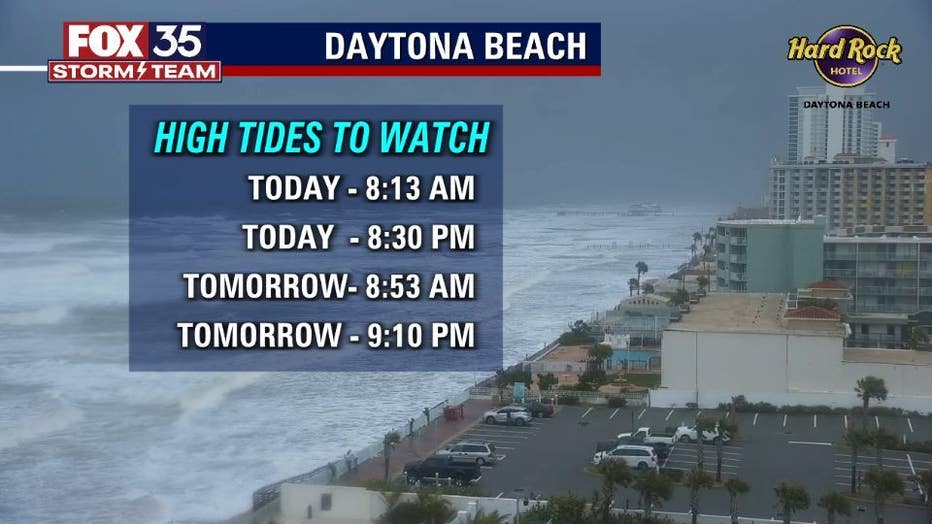 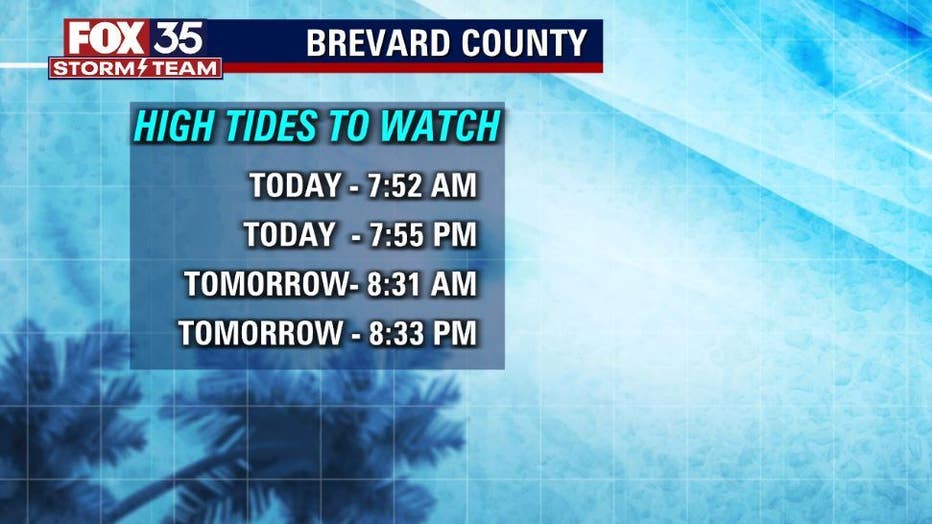 WHEN WILL NICOLE MAKE LANDFALL IN FLORIDA?

Some strengthening is expected Wednesday evening, and Nicole is forecast to become a hurricane before it reaches the east coast of Florida Wednesday night. Nicole is about 135 miles east of West Palm Beach.

The storm, however, is expected to weaken while moving across Florida and the southeastern United States Thursday through Friday, and it is likely to become a post-tropical cyclone by Friday afternoon, the NHC said in its advisory. 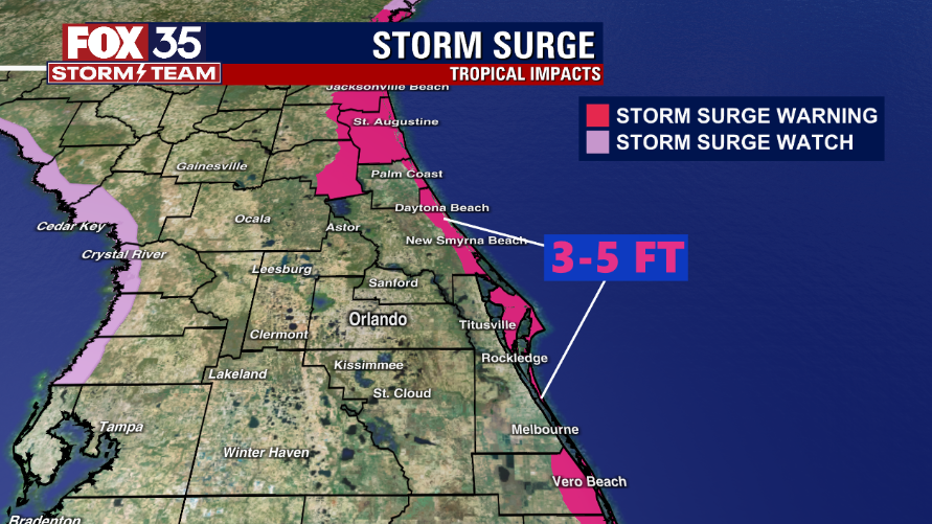 As Floridians prepare for the potential impacts of Tropical Storm Nicole, local emergency management officials are starting to announce evacuation orders. You can find the list HERE.

If Tropical Storm Nicole makes landfall as a Category 1 hurricane as projected, it would be the first November hurricane to hit the U.S. in 37 years.

The last hurricane to make landfall in the month of November was Hurricane Kate, when the storm hit the Florida panhandle on Nov. 21, 1985 as a Category 2 hurricane. Kate came ashore near Mexico Beach, Florida with winds of 100 mph.

When Kate struck the Florida Panhandle, it became the first hurricane to make landfall in that area since Hurricane Eloise in 1975.

Nicole is the 14th named storm of the 2022 Atlantic hurricane season, which wraps up on November 30.