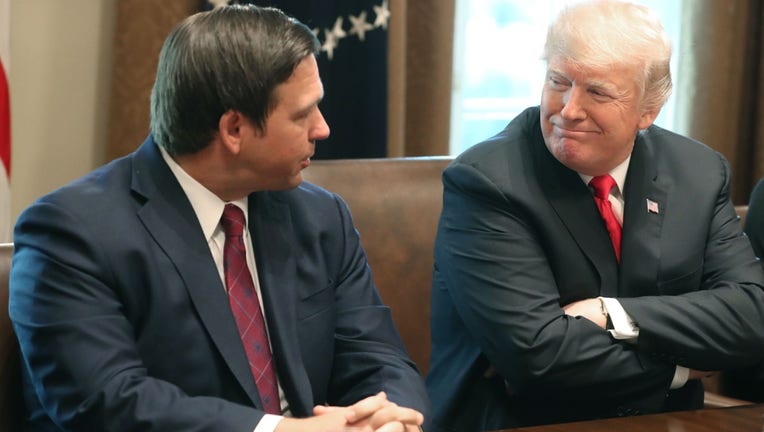 Florida Governor-elect Ron DeSantis (R) sits next to U.S. President Donald Trump during a meeting with Governors elects in the Cabinet Room at the White House on December 13, 2018 in Washington, DC. (Photo by Mark Wilson/Getty Images)

TALLAHASSEE, Fla. - President Donald Trump on Thursday said school districts in states and cities that are considered COVID-19 hotspots should delay reopening schools “for a few weeks” but emphasized that campuses should reopen for the fall term.

Trump added that he is asking Congress to provide $105 billion to schools as part of the next coronavirus-relief bill to help them reopen safely.

A major part of the controversy about reopening schools involves risks to students, teachers, and other school employees as Florida continues to see thousands of new COVID-19 cases each day. Trump even said Florida’s caseload is a “problem” in the country. But the president’s stance on reopening schools mirrored the approach taken by Gov. Ron DeSantis, who said Wednesday that schools should reopen because the “cost of keeping schools closed are enormous,” adding that parents and school employees should not allow themselves to be “paralyzed by fear” during the pandemic.

Trump and DeSantis argue that schools are safe to reopen because the risk of children getting sick is lower than adults.

A South Korea study disputes that assertion and found that children between the ages of 10 and 19 can spread the virus at least as much as adults do. Children younger than 10 transmit the virus much less often than adults, but the risk for them still exists, the study found.

DeSantis said Wednesday that people with underlying medical conditions or who “just don’t feel comfortable with in-person instruction” should not be forced to return to school in the fall. Trump agreed that families should be empowered to choose what is best for their children’s education.

“If schools do not reopen, the funding should go to parents to send their child to (the) public, private, charter, religious or home school of their choice,” Trump said. “The key word being choice. If the school is closed, the money should follow the students so parents and families are in control of their own decisions.”