SpaceX launch scrubbed due to weather

The planned launch a Falcon 9 carrying the first crewed spacecraft in nearly a decade was scrubbed due to weather. The next attempt will happen on Saturday at 3:22 p.m.

The spacecraff -- designed, built and owned spacecraft by SpaceX -- was set to blast off in the afternoon for the International Space Station, ushering in a new era in commercial spaceflight and putting NASA back in the business of launching astronauts from U.S. soil for the first time in nearly a decade.

Forecast ahead of Wednesday’s manned launch by SpaceX

If the weather permits, SpaceX will launch two NASA astronauts into space on Wednesday afternoon.

SpaceX had released a new forecast on Wednesday morning, stating that there is a 50 percent chance of unfavorable conditions for liftoff, with the primary concerns being flight through precipitation, anvil cloud rule, and cumulus cloud rule.

They said that there is still a presence of residual moisture in the area due to a passing low-pressure system and increased low-level convergence. The Space Coast could see showers and thunderstorms this afternoon.

In addition, Tropical Storm Bertha formed in the Atlantic, just off the coast of South Carolina, but was downgraded mid-afternoon.

FOX 35 meteorologist Jayme King is taking a look at what is going on in the Atlantic.

FOX 35 meteorologist Jayme King took a deeper dive into the forecast models for Wednesday afternoon and said that "weather conditions may not cooperate this go around as tropical air remains very, very plentiful all across the peninsula."

There is a 60 percent chance of rainfall and a high risk for lightning with cloud cover increasing. Winds remain light and between 5 to 10 miles per hour.

The active weather scene is expected to continue into the late afternoon and evening hours, with things not calming down until about 8 p.m. 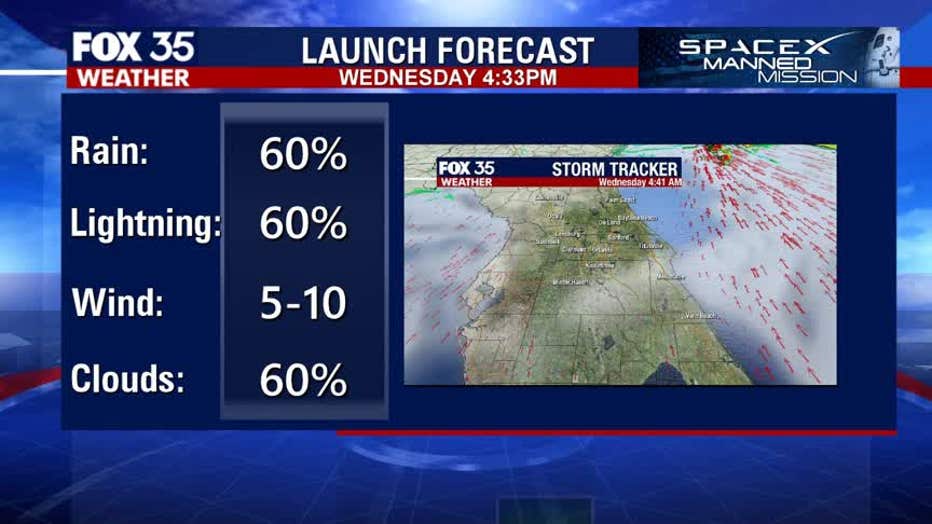 SpaceX will try again on Saturday or Sunday.

The latest SpaceX forecast report shows during that the weekend, the east coast breeze will move further inland, keeping storms father away from the Spaceport. This will allow for a potential clearing but the threat of flight through precipitation, anvil cloud rule, and cumulus cloud rule is still forecasted for Saturday and Sunday as of now.