The East Coast Greenway is a 3,000-mile bike and pedestrian path stretching from Maine to Florida. The route is not continuous and some parts are located on busy streets. Avery Seuter is a 19-year-old taking on the brazen task of riding the entire pathway on a unicycle.

ORLANDO, Fla. - The East Coast Greenway is a 3,000-mile bike and pedestrian path stretching from Maine to Florida. The route is not continuous and some parts are located on busy streets. Avery Seuter is a 19-year-old taking on the brazen task of riding the entire pathway on a unicycle.

"I kind of feel like I am almost there," said Seuter. "I am towards the end now, I've got a lot of momentum keeping me going."

His adventure started in Wells, Maine. He's made stops along the way in places like New York, Washington, D.C., and North Carolina. He said his favorite place he visited on his one-wheeled ride, is in the sunshine state. He recalls the improvements made to the trail on Amelia Island and Jacksonville Beach. Seuter lived in Jacksonville when he was younger before moving to Maine.

Seuter is in Boca Raton, Florida. He's got about 200 miles left until he reaches the end of his five-month-long journey. Seuter is looking back on his time on the road. 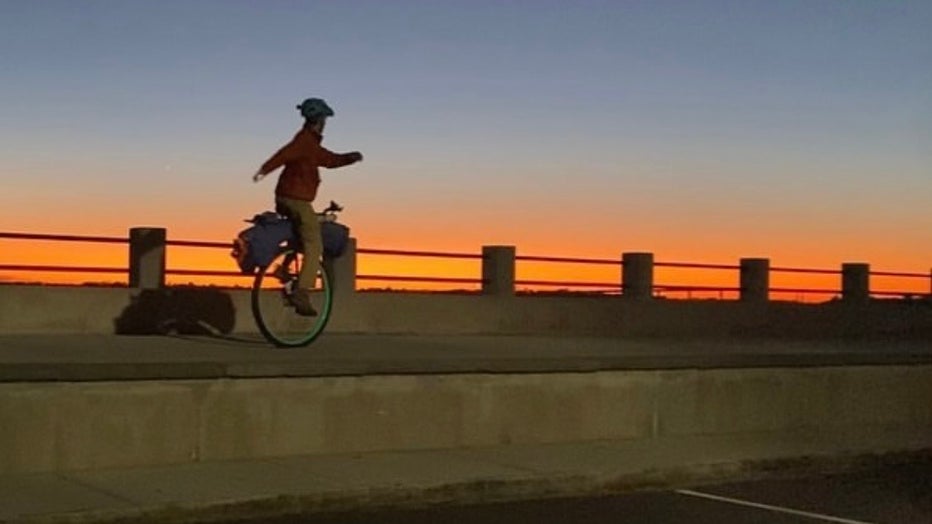 "I've stayed with family, friends, and strangers and different people along the way because I couldn't afford to do this without people's help. It's always really interesting, and it's a great way to meet people," said Seuter.

His helmet is filled with tiny signatures and messages of all the people he has met during his travels. All of is necessities like clothes and a toothbrush are kept in a travel case that fits on his unicycle.

"I've got a little stove as well, so I can cook some mac-and-cheese when I am camping," said Seuter.

Seuter said when he is not staying with people, he is not too worried about the elements or encountering people with bad intentions. He is mostly concerned with getting from one place to the next when he is on the East Coast Greenway. 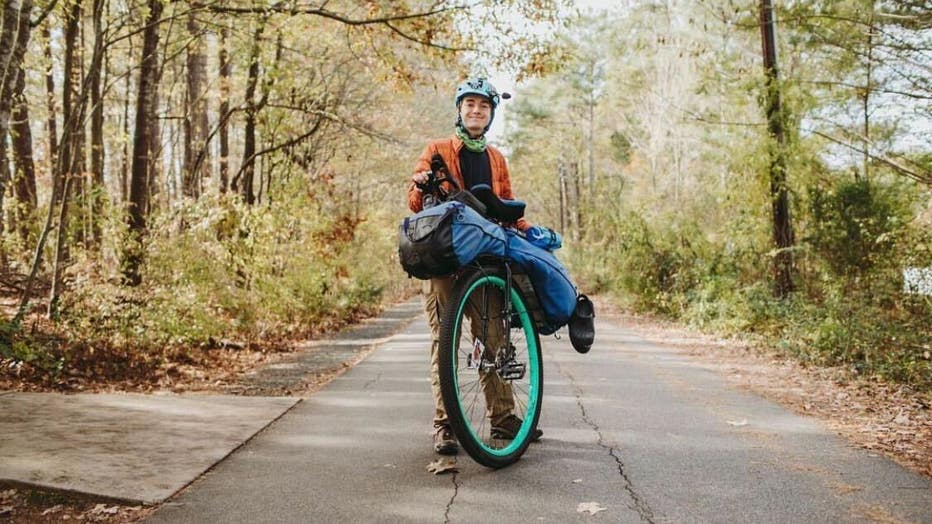 Avery Seuter, 19, at the beginning of his journey in Maine with his unicycle on the East Coast Greenway. [Credit: Avery Seuter] (Avery Seuter)

His goal is to raise awareness for the need to have the paths on busier roads moved to lower-traffic areas. Once the path is moved he said it would encourage other people to get out and use the paths. He made the point that if the pathways do not connect or lead to places where people need to be, they are not very useful.

Seuter is raising money through his social media pages. Between his Instagram and Facebook page, he's raised almost $3,500. Seuter plans to use the money to make safety improvements on the route.

He has his eyes on reaching the Florida Keys by February. Seuter will meet his mom and dad there and spend some time with them after traveling more than 2,000 miles on his unicycle. To get back home to Maine, he is hoping to catch a ride on the train.

"When I get home I am excited to see my cat, and I've got to go back to school," said Seuter.