FOX 35 meteorologist Allison Gargaro is taking a look at your launch day forecast.

CAPE CANAVERAL, Fla. - Anticipation is mounting as we get closer to seeing the first manned launch in 9 years from Florida's Space Coast next week, but some rocky weather conditions could scrub the liftoff, according to the latest forecast.

The 45th Space Wing released their forecast for the May 27 launch, giving it just a 40% chance of favorable weather.

The biggest concerns according to the 45th Space Wing are "flight through precipitation, thick cloud layer rule, and cumulus cloud layer."

RELATED: Trump to travel to Florida to attend SpaceX launch

"On launch day, continued extensive cloudiness is expected with rain showers and isolated thunderstorms throughout the day." 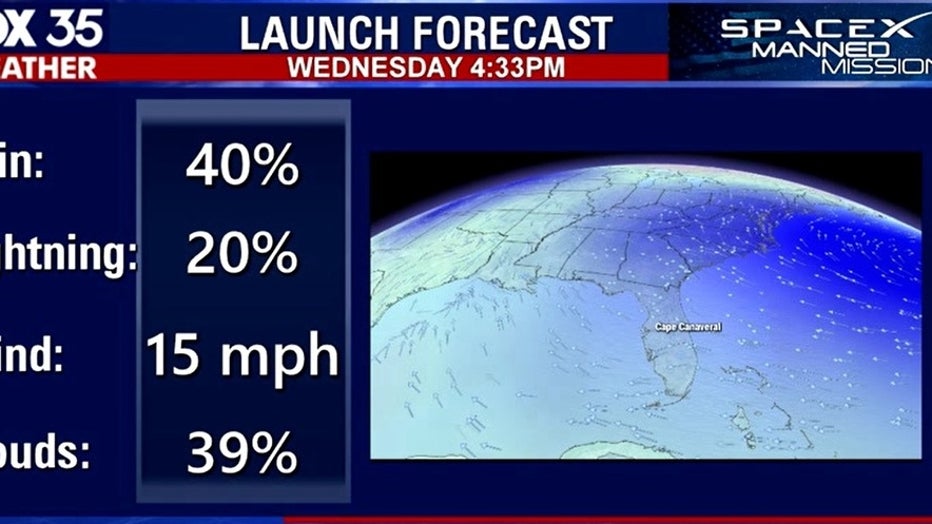 "Right now, we're looking at a 30 to 40% chance for that rain, but we are seeing that increase in easterly sea breeze, so we're hoping that is going to push some of those storms off the coast and heading toward the west coast of the Peninsula just in time for the launch."

Forecast models can change over the next few days.

RELATED: First manned launch in nearly a decade scheduled for Wednesday, here's where you can watch it

Wednesday's launch will be the first time a private company, rather than the national government, sends astronauts into orbit, according to FOX News. It will also be only the fifth time in U.S. history that NASA astronauts will fly a new spacecraft for the first time.

On Friday, SpaceX tweeted that the company performed a "static fire" test of the Falcon 9 rocket that will launch Demo-2 at NASA's Kennedy Space Center in Florida.

According to Space.com, mission teams on Saturday will run through a "dry dress" exercise to simulate many of the activities that NASA and SpaceX will perform in the leadup to launch on Wednesday. Astronauts Doug Hurley and Bob Behnken will suit up for the dry dress, agency officials said.

FOX News reports that President Trump will travel to Florida for the historic SpaceX launch, the White House said Friday.

FOX 35 Orlando will have launch coverage on May 27th beginning on Good Day Orlando between 4 and 10 a.m. Coverage will continue at 4 p.m. as liftoff is expected at 4:32 p.m.