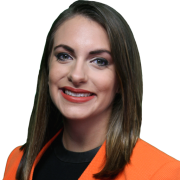 Stephanie Buffamonte is an Emmy nominated journalist who joined the FOX 35 News team in November 2019.

Stephanie grew up on Long Island before moving to the Windy City to attend Loyola University Chicago. She’s excited to get away from the cold and move to the Sunshine State.

Prior to FOX 35 Orlando, Stephanie was a reporter in Milwaukee where she covered the city’s lead crisis, reckless driving epidemic, and many stories that impacted the community. She also spent two years anchoring/reporting in Wausau, Wisconsin before moving to Milwaukee.

In her free time Stephanie likes to run, hike outdoors, try out new restaurants and enjoy the company of her cats Ellie and Tigger. She hopes to participate in the Walt Disney World Half Marathon next year!