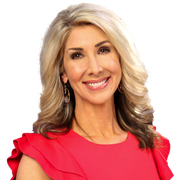 Amy Kaufeldt came to Central Florida in 2003 – one year before the trifecta of Hurricanes Charley, Frances and Jeanne. What a welcome! She grew up in Delaware, Ohio and graduated from Miami University.

Amy started on the assignment desk at NBC in Dayton, Ohio before taking an anchoring position at the ABC in Great Falls, Montana. She also spent three years as a main anchor at the CBS station in East Tennessee and another three years at KJRH in Tulsa, Oklahoma.

Amy is also a big supporter of many local charities and believes strongly in taking part in events that help families who are struggling with a pediatric cancer diagnosis.

A fun fact about Amy, she once hiked the Grand Canyon from top to bottom and back up again in one day on the Kaibab Trail. You can watch Amy weekday mornings on Good Day Orlando from 7 to 10 am.