LITHIA, Fla. - A 2-year-old Florida panther died after being hit by a vehicle in rural Hillsborough County, and, so far, deadly crashes have been the cause for all but two panthers in 2022. However, panther sightings are rare in the county, where it's been at least eight years since one has been found dead.

According to state wildlife officials, the remains of the male panther were found along Keysville Road, north of Alaphia River State Park.

"I’ve heard they were out there," said Lithia resident Travis Young. "My parents and old timers told me they are there."

In the 1970s, only about 20 Florida panthers remained in the wild, but now experts believe there are around 200. They believe the panther killed in Hillsborough County may be evidence the big cats are reproducing and reclaiming parts of the state they occupied decades ago.

After sweet reunion was captured on video after Florida wildlife officials helped reunite a panther with her 4-month-old kitten.

"On one hand I’m sad we’ve lost another Florida Panther, but it’s also a hopeful story that there’s enough connected wildlife habitat for a panther to make it that far north in Hillsborough County," said Carlton Ward Jr., a wildlife photographer and co-founder of the Path of The Panther Project.

This marks the 24th panther death attributed to fatal collisions, out of 26 total deaths this year. So far in 2022, 13 deaths occurred in Collier County – two of which had an unknown cause of death; 5 deaths in Hendry County; 3 in Lee County; 2 in Glades County. 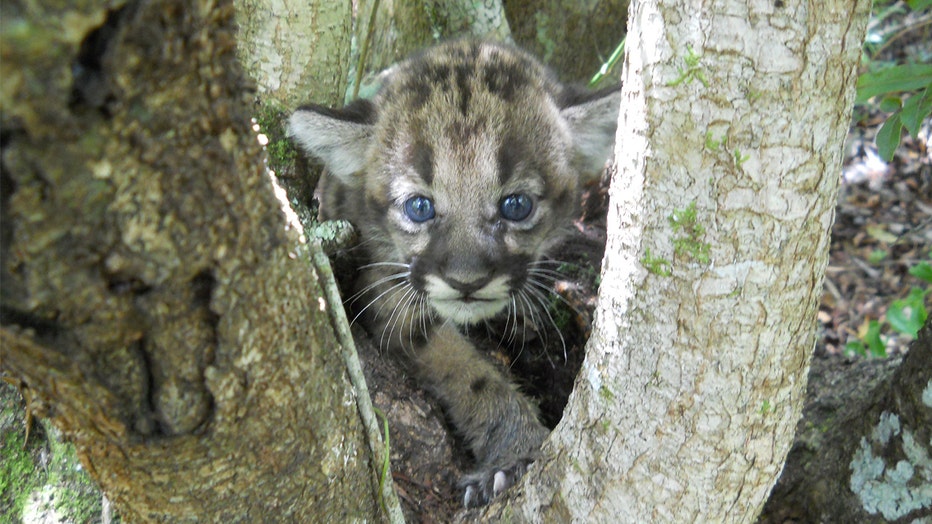 In June 2013, this kitten was found nestled amongst a tangle of wax myrtle stems in Fakahatchee Strand Preserve State Park. (Photo: FWC)

"It’s not going to be every day that a panther or a bear is traveling through," said Ward. "But once in a generation for a panther, if they’re able to make it, that’s enough to get those genetics flowing elsewhere in the state of Florida."

PREVIOUS: Majority of Florida panther deaths in 2021 were due to vehicle crashes

Back in the 1970s, the panther population had plummeted to about three dozen. Now, it is estimated to be more than 200. Conservationists are trying to protect as much green space as possible. The Nature Conservancy, a worldwide organization, is responsible for protecting more than a million acres alone.

A backyard security camera in Polk County captured footage of a Florida panther walking through the neighborhood. Courtesy of Luigi Favilli

The Panther Project is trying to develop wildlife corridors so that panthers and other critters are able to safely travel from one area to the next without risking the danger of roads and highways.

Last year, the majority of Florida panther deaths were due to vehicle crashes. Wildlife officials recorded a total of 27 panther deaths. According to data from FWC, 21 panthers – one as young as four months old – died after they were struck by a vehicle.

The number of panther deaths caused by vehicle collisions is in line with a trend from previous years.

FWS officials say if you're in an area where Florida panthers are known to roam, such as the Florida Panther National Wildlife Refuge, they ask motorists to drive slowly and increase the distance between other vehicles. Panthers are more active between dusk and dawn.