Alligators are a common sight in Florida, but it still took one man by surprise to see a large gator taking an early morning stroll outside of a Publix.

NORTH FORT MYERS, Fla. - Alligators are a common sight in Florida, but it still took one man by surprise to see a large gator taking an early morning stroll outside of a Publix.

Luke Vidal was walking in the parking lot of a Publix in North Fort Myers Friday morning around 6:45 a.m. when he spotted the reptile.

Vidal recorded video of the gator casually ambling through the plaza, which was empty that early in the morning.

It's just one of several reports of alligator sightings, which are on the increase due to the beginning of gator mating season. Though it typically begins in May or June, courtship starts in early April -- which means more of the reptiles venture out in search of their mates.

By late June or early July, female gators will lay between 32 to 46 eggs. Incubation periods for alligators take about 60 to 65 days, and baby gators will be born in late August or early September, according to the Florida Fish and Wildlife Conservation Commission. 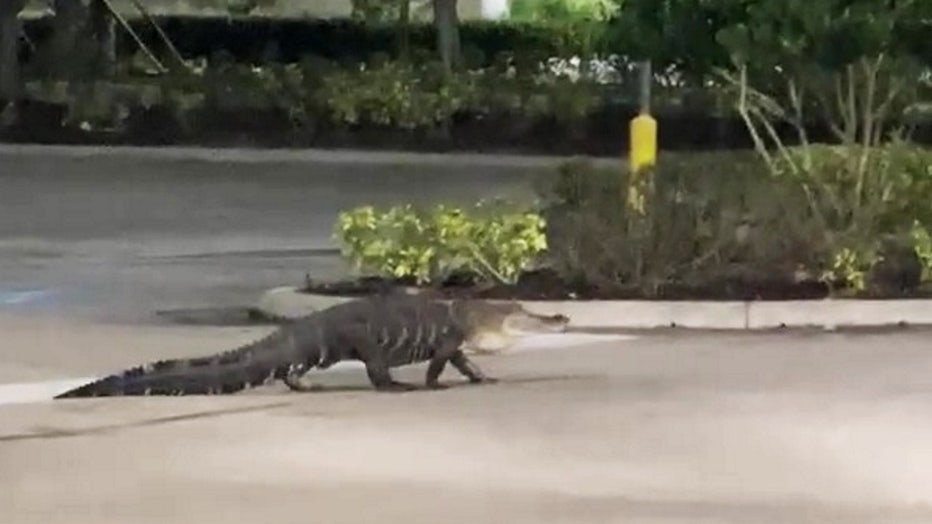 FWC provides the following safety tips when it comes to alligators:

Generally, alligators less than four feet in length are not large enough to be dangerous unless handled. However, if you encounter any alligator that you believe poses a threat to people, pets or property, call the Nuisance Alligator Hotline at 866-FWCGATOR (866-392-4286). Please be aware, nuisance alligators are killed, not relocated.

Be aware of the possibility of alligators when you are in or near fresh or brackish water. Bites may occur when people do not pay close enough attention to their surroundings when working or recreating near water.

Do not swim outside of posted swimming areas or in waters that might be inhabited by large alligators.

Alligators are most active between dusk and dawn. Therefore, avoid swimming at night.

Dogs and cats are similar in size to the natural prey of alligators. Don’t allow pets to swim, exercise or drink in or near waters that may contain alligators.

Dogs often attract an alligator’s interest, so do not swim with your dog.