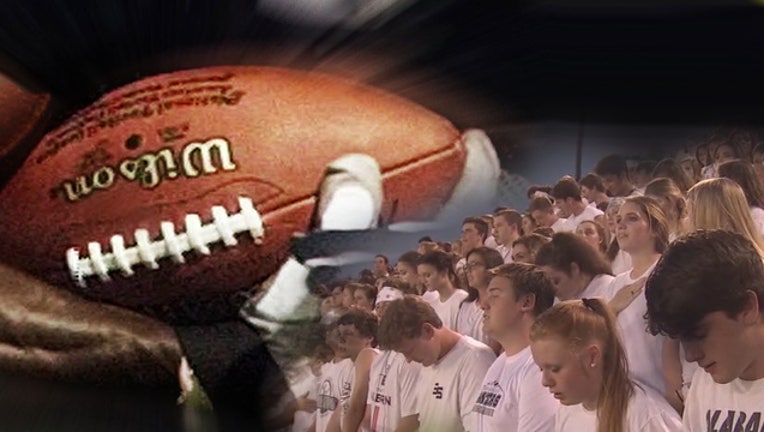 TALLAHASSEE, Fla. (NSF) - Nearly three years after Christian schools from Tampa and Jacksonville squared off in a high-school football championship, a federal appeals court is poised to hear arguments about the constitutionality of a decision that prevented the schools from offering a prayer over the stadium loudspeaker before kickoff.

The 11th U.S. Circuit Court of Appeals will hear arguments next Wednesday in a case filed by Tampa’s Cambridge Christian School against the Florida High School Athletic Association.

A federal judge last year upheld a decision by the association to prevent a prayer over the loudspeaker at Orlando’s Camping World Stadium before a December 2015 championship game between Cambridge Christian and Jacksonville’s University Christian School. Cambridge Christian appealed, arguing the decision violated First Amendment rights.

“The facts are clear and undisputed: Communal prayer is integral to Cambridge Christian’s religious mission, and the Cambridge Christian community was unable to engage in its tradition of communal pre-game prayer due to the FHSAA’s denial of its request to use the loudspeaker to express a religious viewpoint,” attorneys for the school wrote in a brief appealing the district judge’s ruling. “That denial substantially burdened and adversely affected Cambridge Christian’s freedom of religious exercise.”

But the association, which governs high-school sports in Florida, said it is a “state actor” and that the “nature of speech occurring over the public-address system is government speech.”

“Cambridge Christian, a parochial school, sought to force FHSAA’s unconstitutional help in communicating a sectarian religious message to a captive audience at a state-run championship game,” attorneys for the association wrote in a brief. “As the district court recognized, the First Amendment of the U.S. Constitution, the Florida Constitution, and (a section of Florida  law) do not compel the enlistment of state actors, like FHSAA, to engage in proselytization of audience members attending state-sponsored sporting events.”

U.S. District Judge Charlene Edwards Honeywell last year said the association has procedures that include allowing a designated public-address announcer to use the loudspeaker for approved announcements. She wrote that it is “clear that if the prayer was offered by the public-address announcer, this would be viewed as an endorsement by the state, which would be impermissible.”

The Atlanta-based appeals court agreed early this year to hear oral arguments in the case. The arguments will take place at the federal courthouse in Jacksonville.

After the association denied the use of the loudspeaker, players from the teams prayed on the field before the game. But in its brief, Cambridge Christian said supporters of the schools were not able to participate without the use of the public-address system.

“By prohibiting Cambridge Christian from leading its students and their families and fans in a brief communal prayer, the FHSAA engaged in unconstitutional viewpoint discrimination in violation of the Free Speech and Free Exercise Clauses of the First Amendment of the United States Constitution, which prohibits state actors, like the FHSAA, from basing a decision to allow or disallow the use of state-controlled facilities for private speech based on the viewpoint expressed by the intended private speaker and prohibits such actors from imposing restrictions on private religious speech that are greater than the restrictions imposed on private secular speech,” Cambridge Christian’s brief said.

But attorneys for the association disputed such arguments.

“FHSAA never denied Cambridge Christian the ability to express itself through prayer prior, during, or following the game,” the association’s brief said. “But the law does not require --- and for good and valid reason does not permit --- FHSAA to promote sectarian prayer through its state-run public-address system.”

Inforomation provided by The News Service of Florida.