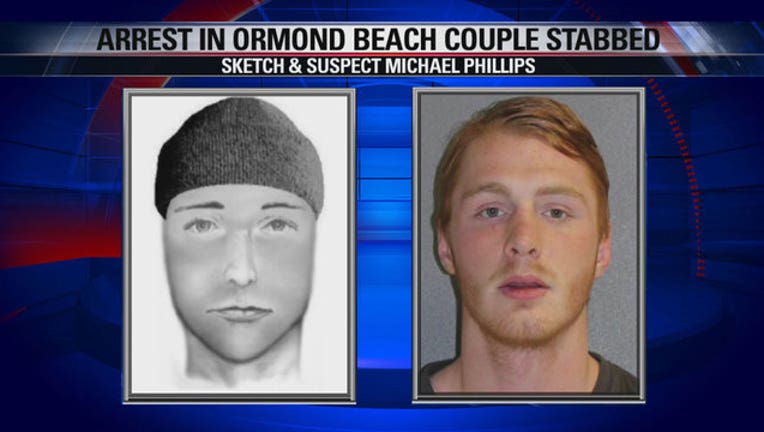 DAYTONA BEACH, Fla. (WOFL FOX 35) - Police in Ormond Beach have made an arrest in a violent double-stabbing that happened inside a home over the Christmas weekend.  A husband and wife said they were attacked by a man they did not know, and investigators later release a sketch of that suspect, based on a description given to them by the victims. According to an arrest affidavit for 19-year-old Michael Phillips, his own father saw the sketch and called police.

Police had previously been looking for an intruder who entered a home on Andrews Street just before 5 a.m. on December 27.  Adam Phillips, 30, and his wife, Shelly, 27, were at home with their two small children when they said they were both attacked by the suspect, who was described as a man in his 20s or 30s.  Both suffered multiple stab wounds, with Adam Phillips seriously injured in the attack.  Police said the suspect left without taking any property or making any demands.

Michael Phillips was located and arrested at at residence on S. Peninsula Drive in Daytona Beach Wednesday evening.  Authorities said that the suspect and the victims are not related, even though they share the same last name.  Detectives are now trying to determine the motive behind the attacks.

Phillips is charged with two counts of attempted first-degree murder and one count of burglary with assault or battery.  He has been booked into the Volusia County Jail.