Humans are the likely cause of the shift in Atlantic hurricane cycles, a new climate study suggests

WASHINGTON - A huge wind farm off the Massachusetts coast is edging closer to federal approval, setting up what the Biden administration hopes will be a model for a sharp increase in offshore wind energy development along the East Coast.

The Vineyard Wind project, south of Martha's Vineyard near Cape Cod, would create 800 megawatts of electricity, enough to power 400,000 homes in New England. If approved, the $2 billion project would be the first utility-scale wind power development in federal waters. A smaller wind farm operates near Block Island in waters controlled by the state of Rhode Island.

Vineyard Wind is significantly farther offshore than Cape Wind, a previous Massachusetts offshore wind project that famously failed amid opposition from the Kennedy family and businessman William Koch, among others, who considered it a bird-killing eyesore in their ocean views. 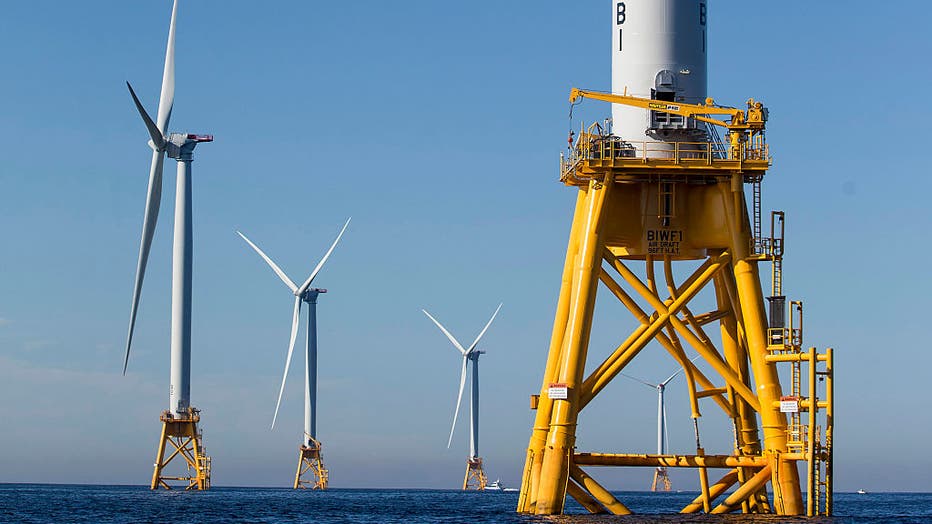 The Interior Department said Monday it has completed an environmental analysis of Vineyard Wind, with a decision on whether to approve the project expected as soon as next month

President Joe Biden has vowed to double offshore wind production by 2030 as part of his administration's efforts to slow climate change. The likely approval of Vineyard Wind — one of two dozen offshore wind projects along the East Coast in varying stages of development — marks a sharp turnaround from the Trump administration, which stymied wind power both onshore and in the ocean.

The project's developer temporarily withdraw its application late last year in a bid to stave off possible rejection by the Trump administration. Biden provided a fresh opening for the project soon after taking office in January.

Vineyard Wind, which is slated to become operational in 2023, is the first of many offshore wind projects that will help the nation "combat climate change, improve resilience through reliable power and spur economic development to create good-paying jobs," said Amanda Lefton, director of the Bureau of Ocean Energy Management, an Interior agency that oversees the project.

"The Biden administration is putting wind back in the sails of this vital new industry," said Sen. Ed Markey, D-Mass., a longtime cheerleader for the Vineyard Wind project. "Responsible development of wind off our coast (will) energize the economy, provide affordable electricity and move us further into a climate-safe future," Markey said.

Despite the enthusiasm, offshore wind development is still in its infancy in the U.S., far behind progress made by countries in Europe. Besides the Block Island project, a small wind farm operates off the coast of Virginia.

Vineyard Wind CEO Lars Pedersen said in a statement that the company looks "forward to reaching the final step in the federal permitting process and being able to launch an industry that has such tremendous potential for economic development in communities up and down the Eastern Seaboard."

"The offshore industry is on the point of taking off," said Amy Farrell, a senior vice president of the American Clean Power Association, a trade group for renewable energy. The group expects 30 gigawatts of offshore wind energy to be built over the next decade.

Wind developers are poised to create tens of thousands of jobs and generate more than $100 billion in new investment by 2030, "but the Bureau of Ocean Energy Management must first open the door to new leasing,'' said Erik Milito, president of the National Ocean Industries Association, another trade group.

Not everyone is cheering the rise of offshore wind.

Andrew Minkiewicz, an attorney for the Fisheries Survival Fund, which advocates for the sea scallop fishing industry, said the group has concerns about the abrupt shift in attitude from the Trump administration to Biden.

The project appeared dead — or at least on indefinite pause — as recently as last year, "and the new administration comes in and says no, we’re going to go ahead," Minkiewicz said. "If this were not a clean-energy project, I think there would be an absolute uproar."

Fishing groups from Maine to Florida have expressed fear that large offshore wind projects could render huge swaths of the ocean off-limits to their catch. While Vineyard Wind is not located in an area critical to the scallop fishery, other potential sites along the Atlantic coast could pose a major threat to scallopers, Minkiewicz said.

RELATED: Pollen seasons in the US getting longer, more intense due to climate change, study finds