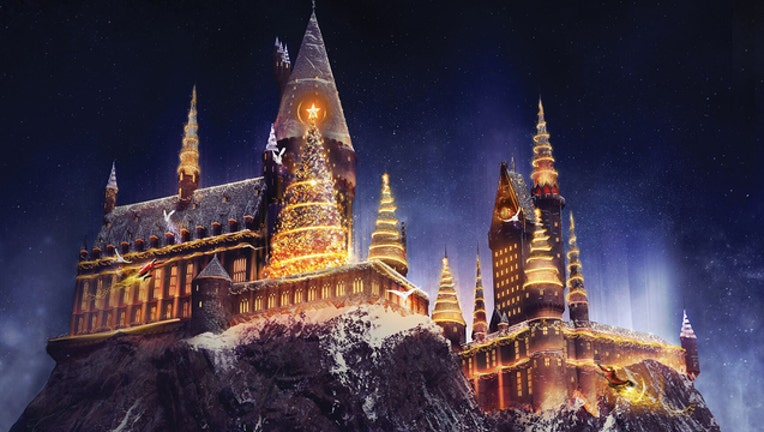 A new Christmas experience is coming to The Wizarding World of Harry Potter at Universal Orlando Resort as part of the destination’s resort-wide Holiday celebration, which will run from November 18, 2017 to January 6, 2018. Christmas in The Wizarding

ORLANDO, Fla. (WOFL FOX 35) - The most wonderful time of the year is coming to one of the most immersive theme park experiences ever created.

Universal Orlando Resort on Thursday announced that a new Christmas experience is coming to The Wizarding World of Harry Potter as part of its destination-wide Holiday celebration.  Plus, a brand-new parade featuring Macy’s will also join Universal’s epic lineup of Holidays experiences – making Universal Orlando the place to be for Holidays.

These new experiences will join other holiday traditions at Universal Orlando for the destination’s 2017 Holidays celebration, which will run for more dates than ever before from November 18, 2017 to January 6, 2018.

Celebrate Christmas in The Wizarding World of Harry Potter

Christmas is a special time in the Harry Potter series, and fans from around the world have long wanted to enjoy that part of J.K. Rowling’s compelling story for themselves. This November, the new Christmas experience in The Wizarding World of Harry Potter will give guests a special opportunity to see, feel and even taste what it’s like to celebrate the magic of Christmas in J.K. Rowling’s Wizarding World.

As night falls, a magical holiday transformation of Hogwarts castle will take place right before guests’ eyes.  Incredible state-of-the-art projection mapping and special effects will wrap the iconic castle – bringing holiday spirit and memorable Christmas moments from the Harry Potter series to life like never before.

Festive décor like ornate garlands will line the streets of both Hogsmeade and Diagon Alley.  Each storefront will be decked out with uniquely-themed decorations, and guests will enjoy special holiday themed food, drink and entertainment.

A brand-new holiday parade experience will also join Universal Orlando’s resort-wide Holiday celebration beginning this November. Universal’s Holiday Parade featuring Macy’s will take place in Universal Studios Florida and feature magnificent new, incredibly-detailed floats and balloons, and beloved characters like the mischievous Minions from Despicable Me, popular DreamWorks characters from Madagascar and Shrek – and even Santa Claus himself.  Universal is partnering with Macy’s, the global leader in balloon entertainment, to bring this new parade experience to life.  More details will be released soon.

Universal Orlando’s resort-wide Holidays celebration – including Christmas in The Wizarding World of Harry Potter and Universal’s Holiday Parade featuring Macy’s – will run daily from November 18, 2017 to January 6, 2018. Access to the festivities is included in regular admission to Universal Studios and Islands of Adventure.  Guests can now book a special vacation package to experience all of Universal’s epic Holidays entertainment.  Packages start at $165 per adult, per night (tax inclusive) and include four-night hotel accommodations at Universal’s Cabana Bay Beach Resort, a 4-day/3-park ticket that includes admission to ALL THREE Universal theme parks – including Universal’s new water theme park, Volcano Bay, which grand opens on May 25, and early park admission to The Wizarding World of Harry Potter and Volcano Bay.