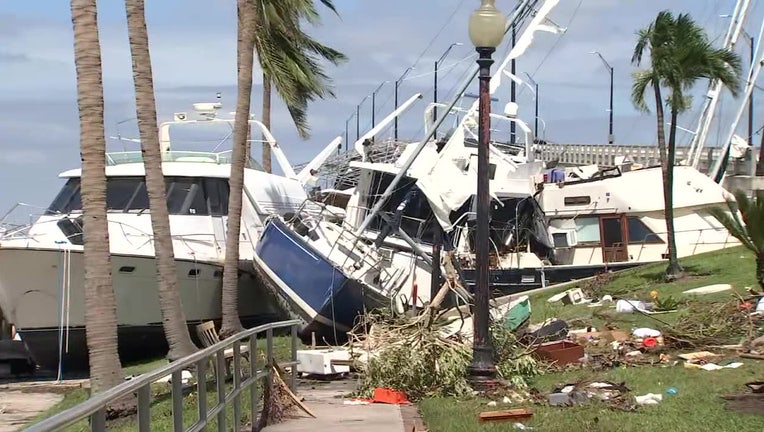 TALLAHASSEE, Fla. - After traveling Thursday to Southwest Florida to get a glimpse of the damage caused by Hurricane Ian, Gov. Ron DeSantis described the impact on Lee County’s Sanibel Island as "destruction," with people who didn’t evacuate being rescued by air and part of a causeway to the mainland knocked out.

Meanwhile, authorities confirmed 12 deaths from the storm amid fears that the number could increase significantly as crews go into communities.

President Joe Biden said Thursday that "this could be the deadliest hurricane in Florida history" and that "we're hearing early reports of what may be substantial loss of life."

Lee County Sheriff Carmine Marceno said during a morning appearance on the television show "Good Morning America" that fatalities were "in the hundreds." Marceno later said he couldn’t "give a true assessment" until authorities got to the scene.

DeSantis said Marceno was referring to an "estimate" based on people who called 911 about rising water in their homes. The storm made landfall Wednesday in Lee and Charlotte as a Category 4 hurricane before crossing the state through Central Florida.

The deadliest hurricane in Florida history was the September 1928 storm, which caused 2,500 to 2,800 deaths after it hit West Palm Beach and flooded communities around Lake Okeechobee.

The 1935 Labor Day hurricane, which swept north after hitting the Florida Keys, caused more than 400 deaths.

Biden and DeSantis, who frequently clash about political and policy issues, said the state and federal governments will work together on rescue, relief and rebuilding efforts The two talked Thursday morning, and Biden said later he plans to visit Florida at a time when he will not get in the way of rescue efforts.

Hurricane Michael, which hit Mexico Beach and decimated parts of Northwest Florida in 2018, is estimated to have caused 50 deaths. Hurricane Andrew in 1992 has been linked to 44 deaths.

"We're seeing millions of people without power and thousands hunkered down in schools and community centers," Biden said after getting a briefing at Federal Emergency Management Agency headquarters in Washington, D.C. "They're wondering what's going to be left, what's going to be left when they get to go home, quote unquote, home, or even if they have a home to go to. Some of the folks have been through this before. But that doesn't make it any easier. Actually, it makes the anxiety even higher in my view."

"My message to the people of Florida, the country at times like this, America comes together," Biden continued. "We're going to pull together as one team, as one America. First thing this morning as I talked to Gov. DeSantis and again offered the fullest federal support."

Biden early Thursday issued a major-disaster declaration, making federal assistance available to people in parts of Florida and providing help to the state and local governments with costs of debris removal and emergency-protective measures.

After traveling to Southwest Florida, DeSantis held a news conference at the Charlotte County Emergency Operations Center in Punta Gorda. He said, for example, Sanibel Island "got hit with really biblical storm surge. And it washed away roads and it washed away structures that were not new."

DeSantis said people had been rescued by the U.S. Coast Guard and local law-enforcement air operations.

"Many people did leave Sanibel. And they did heed the call, which is good. Obviously," DeSantis said.

The state Division of Emergency Management issued an update saying that as of 2 p.m., more than 500 people had been rescued in Lee and Charlotte counties. Search and rescue efforts were "ongoing in impacted areas," the agency said in a Twitter post.

DeSantis said the causeway to Sanibel Island will be rebuilt, "but that's not something that will happen overnight."

"There are sections of our territory close to the beach along the barrier islands that will require rebuilding," Silagy said. "There are some destructive areas that simply cannot be repaired. And they'll have to be rebuilt. Unfortunately, there are also homes and businesses that will simply not be able to safely take the power once it's ready."

Silagy said about 20,000 crew members had been deployed, as Ian continued battering Northeast Florida as a tropical storm Thursday. Silagy said FPL didn’t lose any transmission towers, but will need to restore the distribution system and substations that were hit by flying debris.