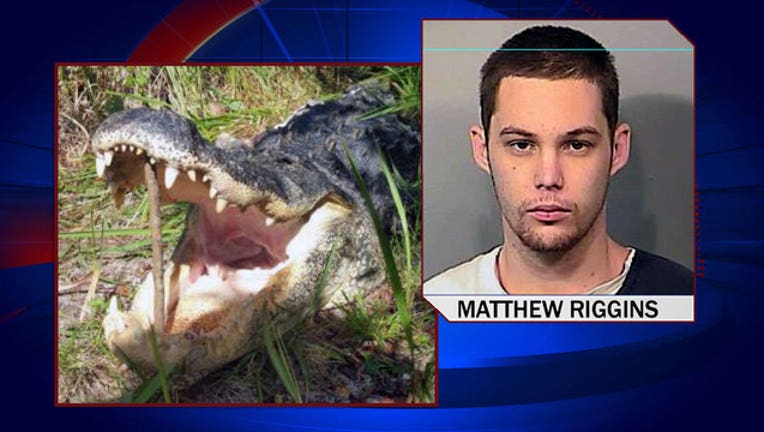 Dive team members encountered a large, aggressive alligator while attempting to recover the body of 22-year-old Matthew Riggins, of Palm Bay.  Riggins' body was located in a Barefoot Bay lake on November 23, ten days after he was reported missing.   Due to trauma observed on the body, a trapper was called and the approximately 11-foot alligator was euthanized.  A forensic examination of the alligator located remains consistent with the injuries to Riggins, inside the alligator’s stomach.

Authorities pieced together events leading up to Riggins' death.   They believe that he and another man were burglarizing homes in the area of Tequesta Drive on the evening of November 13.  A homeowner reported seeing two men who were dressed in black, sneaking behind homes in the neighborhood.  Deputies arrived, spotted the men and began to pursue them on foot, but they got away.

It was later learned that Riggins had contacted his girlfriend that evening, telling her he was being chased by deputies.  Riggins was reported as a missing person to the Palm Bay Police Department later that day when he did not return home.

Agents have identified the other man who they believe was accompanying Riggins that night; however, he has refused to cooperate with law enforcement in reference to this investigation.  Anyone with information about this Investigation is asked to please call Agent Marlon Buggs of the Brevard County Sheriff’s Office Homicide Unit at or CRIMELINE at 1-800-423-TIPS (8477).