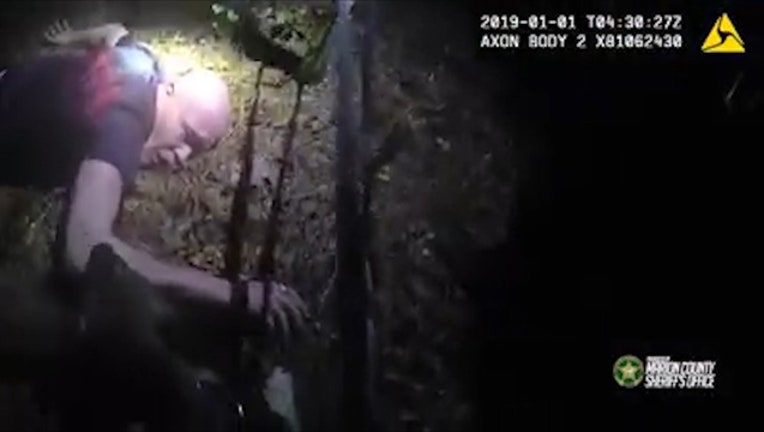 MARION COUNTY, Fl. (WOGX FOX 51) - A Marion County man was arrested on New Year’s Eve, after deputies say he threw gas on his mom and threatened to light her on fire.

Deputies say 40-year-old Daniel Jones was found hiding in the woods after they were called to his neighborhood in Ocklawaha.

They say when they got on scene, they found Jones’ 66-year-old mother at a neighbors home, where she had run for help.

“I woke with him stomping in the room. He goes, ‘Where did you put it?’ Screaming nonsense at me,” she told investigators in an interview that was captured on body camera video that night. “No argument – threw it on me and said, ‘You’re gonna burn.’”

Deputies say he then approached her with a propane torch and she took off. A sheriff’s office helicopter was called to the scene to search for Jones.

“You can see from the video air one spots him not very far from the scene. And he’s walking around the woods, he’s hiding in the woods and laying down at points,” said Lauren Lettelier, a spokesperson for the Marion County Sheriff’s office.

Body cam video shows the moments deputies make contact with Jones on the ground. They say he ignored their orders to show them their hands and their K9 was used in the takedown.

But his mother, who didn’t want to share her full name, says he doesn’t belong in jail.

“I know now its medical but I didn’t know then,” she said.

She claims that Jones has diabetes and that his blood sugar was so high – he was delirious.

“That wasn’t him – that was the high sugar,” she said.

Jones’ mom says she may have given deputies inaccurate information on scene about what happened because she was so upset at the time.

Investigators say the charges stand and the case will move forward.