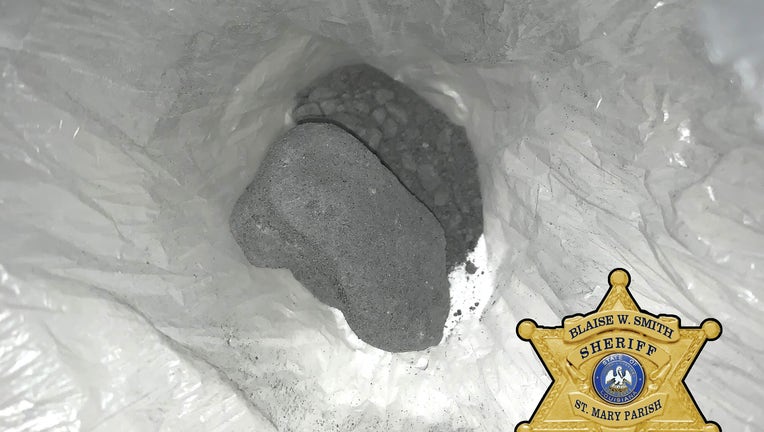 FRANKLIN, La. - Authorities in Louisiana are warning the public to stay clear of a new type of heroin known as 'gray death' -- a drug so potent that just a tiny amount could kill you.

The St. Mary Parish Sheriff's Office posted photos to Facebook of the drug, which has the appearance of small chunks of concrete.

According to deputies, 'gray death' is a lethal combination of some of the most deadly opioids including heroin, fentanyl, and various fentanyl analogues.

"It is reported to have a potency 10,000 times greater than morphine," the Sheriff's Office advised.

MORE NEWS: Deputies warn citizens of text scam that will send you mutilated bodies, scare you into paying money

The super drug reportedly began to surface in the south in Alabama and Georgia. The Sheriff's Office said this is the first time they have encountered it in their area, but are sure that it has been found in other places in Louisiana.

The drugs in the photos were recovered from suspects that were traveling across St. Mary Parish from the Lake Charles area, deputies said.

"A minuscule amount of this drug, which has the appearance of small chunks of concrete, can kill."

The public is advised to never pick up or touch this drug if you ever encounter it and to call and report it to law enforcement.

"These drugs contain harmful ingredients in unknown amounts. Many times these drugs are accompanied by needles and other drug paraphernalia which can be dangerous."