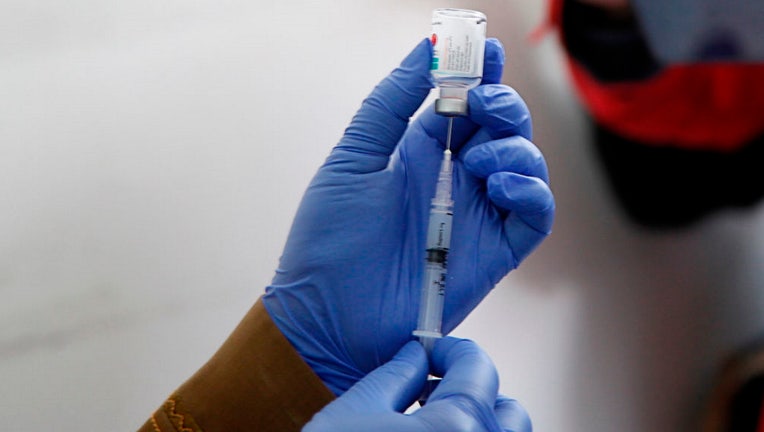 A file image shows a medical worker preparing a vaccine during a COVID-19 vaccine trial. (Photo by Adriana Adie/NurPhoto via Getty Images)

More than half of the vaccines --- 97,500 doses --- will be sent to five Florida hospitals to be administered to high-contact and high-exposure health care personnel, DeSantis said.

The remaining 81,900 doses of the Pfizer vaccine will be sent to CVS and Walgreens and the Department of Health for use in nursing homes and assisted-living facilities. DeSantis has made clear that residents of long-term care facilities are his top priority.

“We are working to get as much vaccine for our citizens as possible, but Florida will not, nor will any state, have enough to vaccinate everyone right off the bat,” DeSantis said in the video.

According to DeSantis, 60,450 doses will be sent to CVS and Walgreens, which are under contract with the federal government to provide vaccines to residents and staff at nursing homes and assisted-living facilities.

Another 21,450 doses will be sent to the Florida Department of Health. The state agency, along with the Florida Division of Emergency Management and the Florida National Guard, will administer the vaccine in areas of the state that “have a high concentration of facilities,” DeSantis said in the video.

The governor didn’t provide any additional details on which areas are considered to have a high concentration of facilities.

Florida was required to submit its final COVID-19 vaccine distribution plan to the federal government by Dec. 4. The News Service of Florida has made repeated requests for the public document but the governor’s office has not responded.

Thursday’s video was the first time DeSantis publicly said how many vaccines the state will receive.

While the governor said Thursday that the five hospitals will receive 97,500 doses, he did not say how many vaccines each of facilities --- Jackson Memorial in Miami, AdventHealth in Orlando, Tampa General Hospital, the Memorial Healthcare System in Broward County and UF Health Jacksonville --- will be provided.

DeSantis’ office released the video about the vaccines hours after Florida Senate Democrats criticized his handling of the coronavirus.

“The vaccine distribution needs to be done in a scientific manner, and we haven’t seen that that’s happening at all here in the state right now,” Sen. Lori Berman, D-Lantana, told reporters during a virtual press conference.

At a White House summit earlier this week, Trump administration officials said the vaccine would be shipped to states within 24 hours of receiving emergency approval.

Pfizer's vaccine candidate has not yet received emergency authorization approval from the federal government. Clearing the way for final approval, the Food and Drug Administration's vaccine advisory committee on Thursday endorsed the vaccine candidate developed by Pfizer in conjunction with BioNTech Manufacturing.

Florida is closing in on 20,000 COVID-19 deaths and has logged more than 1.08 million cases of the virus since the onset of the pandemic.

Since the beginning of December, Florida has reported daily averages of 9,338 new COVID-19 cases and about 98 daily deaths tied to the virus. The daily average of cases is the highest for a nine-day period since late July.

The release of the vaccine information also comes amid a national spotlight on Rebekah Jones, a former Department of Health employee who was fired earlier this year. State agents and local police showed up at Jones's Tallahassee home Monday morning to serve a search warrant. Later in the day, Jones tweeted a video of armed police entering her home.

Jones can be heard saying in a high-pitched voice, “He just pointed a gun at my children.”

The Florida Department of Law Enforcement has contended that none of the agents pointed their guns at anyone in Jones’s house.

On Thursday, FDLE released body-camera video from one of the officers outside Jones' home. The video shows agents repeatedly on her front door. Jones did not respond for more than 13 minutes, the video shows.

"Agents afforded Ms. Jones ample time to come to the door and resolve this matter in a civil and professional manner. As this video will demonstrate, any risk or danger to Ms. Jones or her family was the result of her actions," he said.

Jones was fired earlier this year after complaining that DeSantis’ administration was manipulating COVID-19 data to make the virus appear less prevalent as the governor pushed to reopen Florida’s economy.

Monday's search was part of an investigation into an unauthorized message that was sent on an internal state communications system.