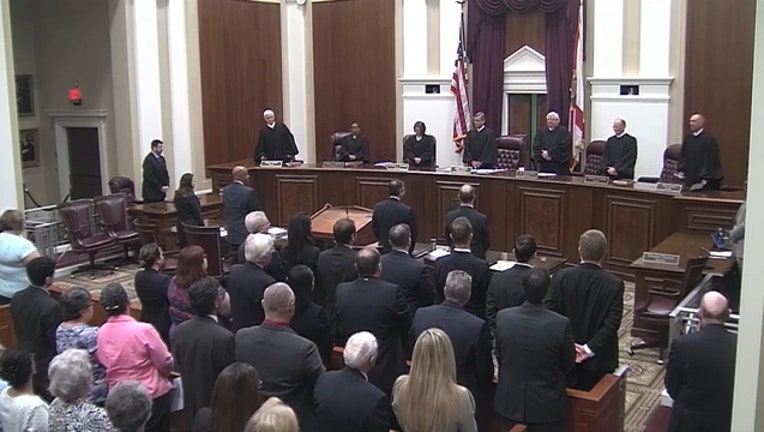 DeSantis tapped Robert J. Luck, a 39-year-old judge on the state’s 3rd District Court of Appeal, to fill the second of three vacancies on the high court. Last week, DeSantis appointed Barbara Lagoa, who had served as chief judge of the Miami-based appellate court, to the Supreme Court.

Filling the court vacancies, which is taking place because three justices faced a mandatory retirement age, is one of the most-important early tasks for DeSantis, who became governor last week. He is expected to announce the appointment of a third justice from the remaining field of nine candidates shortly.

“Really across the board, people who know him, like him and respect him. So I think not only will he be a formidable force on the Florida Supreme Court, I think he will immediately have the respect of all his colleagues on that court and beyond,” DeSantis said about Luck.

Luck, a graduate of the University of Florida Law School, will be the youngest member of the Supreme Court and could potentially serve until he is 75 years old.

But despite his relative youth, Luck has a broad legal resume. A native of Miami-Dade County, he has served as a law clerk to a federal appellate judge. He worked about five years as a federal prosecutor in Miami. Gov. Rick Scott appointed him to a circuit court seat in Miami-Dade in 2013, and Scott elevated him to the appellate court in March 2017.

DeSantis, a Harvard Law graduate, noted Luck’s skills as a legal writer. “He was born to be a judge. There’s just no doubt about it,” DeSantis said.

The announcement was made at the Scheck Hillel Community School, a Jewish day school in Miami-Dade where Luck started kindergarten more than three decades ago. He and his wife, Jennifer, have a son and a daughter who now attend the school.

In accepting the appointment, Luck talked about the working-class roots of his family members and their deep ties to the Miami-Dade community.

“Two generations after my grandfather sliced brisket at a deli, one generation after my father-in-law slept on the basement floor of his boss’ T-shirt shop, so he could save as much money as possible, I am here having been sworn in as a justice of the highest court in the state,” Luck said.

Luck noted comments in DeSantis’ inaugural speech last week that justices should not “legislate from the bench” and should make the state and federal constitutions their “supreme” guide.

“I swear to you governor, I will keep that oath today, tomorrow, and God willing, for the next 35 years,” Luck said, referring to his taking the oath to uphold the state and federal constitutions.

But Luck made a distinction between his deep Jewish faith and his role as a judge. He said he and others use their faith “to guide their moral principles and their ethical decision-making.”

“But I think it’s very different from my job as a judge,” he said, adding his judicial role would be guided by constitutional principles.

Luck also noted he is the first Jewish justice to be appointed to the Supreme Court in more than 20 years. Justice Barbara Pariente, who is Jewish and was first appointed to the court in 1997, retired Tuesday along with justices R. Fred Lewis and Peggy Quince.

Once completed, DeSantis’ appointments to replace the three retiring justices are expected to establish a solid conservative majority on the court, more likely to uphold decisions by the Republican-led Legislature and the GOP governor.

“Justice Luck's vocal repudiation of judicial activism and opposition to legislating from the bench is both a refreshing and reassuring judicial philosophy,” Oliva said in a statement.

But state Sen. Perry Thurston, D-Fort Lauderdale, noted that DeSantis’ appointments are likely to leave the court without a black justice for the first time since 1983.

Although six African-Americans were among 59 judges and lawyers who applied for the three court vacancies, the Supreme Court Judicial Nominating Commission did not advance any black applicants in its list of 11 finalists to DeSantis.

Thurston called upon DeSantis “to maintain diversity” on the court.

“We know there are candidates not being considered that are highly qualified and represent Florida's diversity,” he said in a statement.