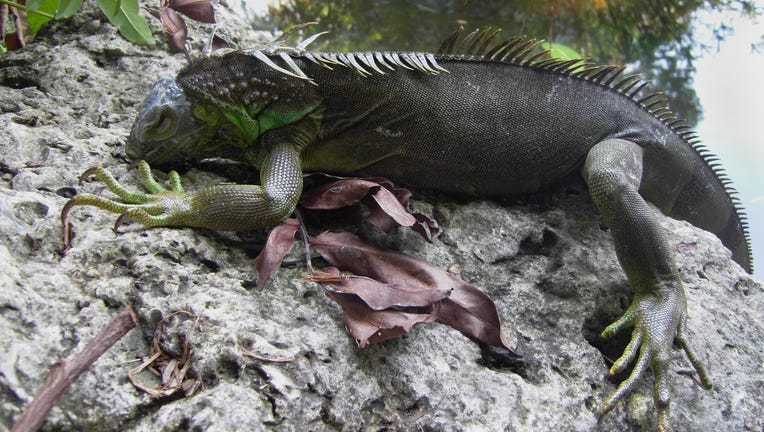 An iguana which fell from a tree climbs a rock in Miami on January 8, 2010 as an unusual cold spell has hit the normally balmy southern state of Florida. Cold-blooded reptiles, such as iguanas, become immobilized by the cold weather and lose their gr

LAKE MARY, Fla. - You have probably heard of falling iguanas in Florida, and this weekend there is a chance to see them because of an Arctic cold front likely to bring the coldest air of the season so far.

Iguanas are cold-blooded, so they slow down or become immobile when temperatures drop below 40 degrees. The current forecast for Christmas Eve shows temperatures near freezing in Central Florida.

Arctic air is on the way! FOX 35 Storm Team Meteorologist Allison Gargaro has the forecast.

It is difficult for iguanas to endure the cold temperatures that we will see this weekend, so they could fall out of trees.

A friendly reminder, if they do fall out of a tree, they are not dead.

According to the Florida Fish and Wildlife Conservation Commission, the iguanas are not native to Florida and are considered invasive species due to their impacts to native wildlife.

They are not protected in Florida except by anti-cruelty laws and can be humanely killed on private property year-round with landowner permission.