Kobe died in a helicopter crash on Sunday in Calabasas, California.

ORLANDO, Fla. - Loud cheering could be heard over the rap music playing in the Amway Center on Sunday night as shots of fans wearing Kobe Bryant jerseys popped up on the jumbotron.

“Why I’m wearing this jersey is to represent Kobe Bryant. He was my number one hero,” Barbara Mills told FOX 35.  right yellow Lakers jerseys bearing number 24 were seen all over the Amway Center as fans showed their respects for one of basketball’s all-time greats. “Got my prayers going up to the family, especially his wife. Losing a husband and a daughter. That’s emotional." 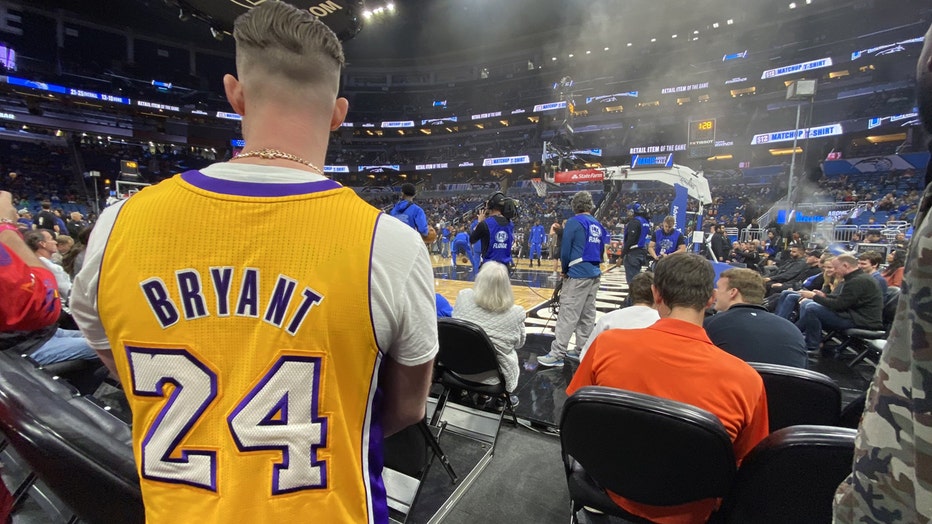 Greg Ellis and his family are from Canada. They have been at Disney all week and while planning their vacation out, he and his wife decided this vacation would be a good time to take their young boys to their first NBA game.

“I packed up my Shaq (Orlando Magic) jersey before I left. And for some reason, I put my Kobe jersey in there. Not even sure why I did it. It’s kind of weird,” Ellis told FOX 35 News. That was a very weird move considering he knew the Magic would be playing the Los Angeles Clippers, not the Los Angeles Lakers. “I know it is a little strange. I have a ton of other jerseys at home too. I really don’t know why I did it. That’s surreal.”

Kobe has been one of Ellis' favorites. He loved Black Mamba's killer instincts on the court and his desire to help others off the court. He said that Kobe "was a good guy on and off the court too. Helping out the community. A good role model for kids. I mean I can’t say enough about the guy.

The atmosphere wasn’t quite what he had planned for his sons' first NBA game, as the death of Kobe Bryant hit those who knew him and those who admired him hard. He said that “I was expecting to come see a fun basketball game. I told my wife it feels more like a funeral of sorts, so pretty sad day."

Tune in to FOX 35 News for the latest update on the tragic crash that took the life of NBA legend Kobe Bryant.