Joel Greenberg has pleaded guilty to six of the nearly three dozen charges he faced, including sex trafficking of a minor, and he admitted that he had paid at least one underage girl to have sex with him and other men.

The Department of Justice is investigating Rep. Matt Gaetz, R-Fla., for obstruction of justice, according to multiple reports, the latest development in a sex trafficking probe into an associate of Gaetz that may implicate the congressman, FoxNews.com is reporting.

Gaetz has firmly denied any allegation that he broke the law. He told "Tucker Carlson Tonight" earlier this year that "it is a horrible allegation and it is a lie" that he traveled across state lines with a 17-year-old girl for the purpose of sex. But in potential bad news for Gaetz, his associate Joel Greenberg recently pleaded guilty to six charges and agreed to cooperate with prosecutors.

Now, according to Politico, that investigation into Gaetz includes potential obstruction of justice. The outlet reported that Gaetz was patched into a call between a woman who is a witness in the probe and an ex-girlfriend of Gaetz. 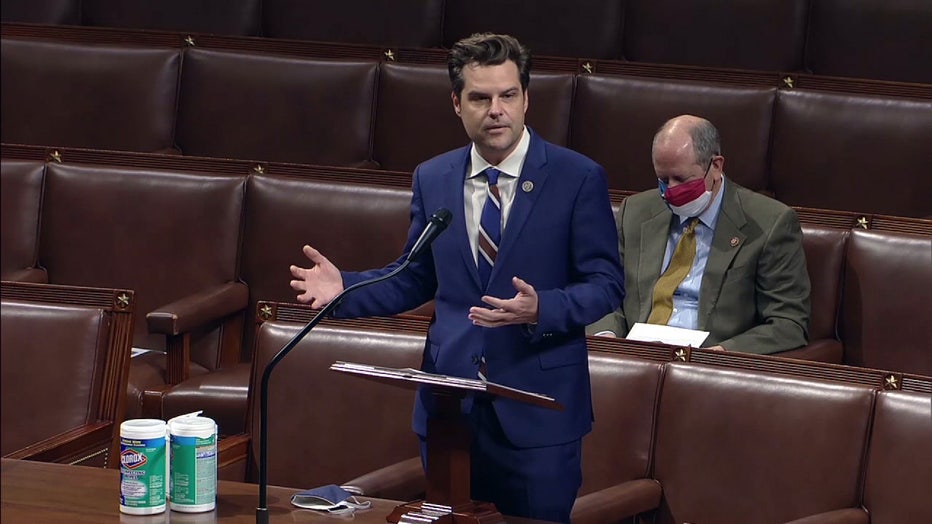 Politico reported the contents of the call are not clear but it is a major part of prosecutors' considerations about whether to charge Gaetz with obstruction of justice – a crime that involves attempting to influence the outcome of a pending investigation. Among the ways that can be done is by trying to affect witness testimony.

"Congressman Gaetz pursues justice, he doesn’t obstruct it," a Gaetz spokesperson said in a statement. "The anonymous allegations have thus far amounted to lies, wrapped in leaks, rooted in an extortion plot by a former DOJ official. After two months, there is still not a single on-record accusation of misconduct, and now the 'story' is changing yet again."

The spokesperson added: "Rep. Gaetz's legal team continues to investigate the attempted extortion of a sitting U.S. Congressman and anyone who may be connected to it."

The Department of Justice declined to comment in response to an inquiry from Fox News.

Gaetz's longstanding relationship with Greenberg began when they both ran in political circles in Florida. The broad investigation involves allegations that Gaetz and Greenberg paid underage girls and escorts for sex, the Associated Press reported, citing two people familiar with the matter.

Prosecutors are also looking into whether Gaetz tried to secure government jobs for some of the women and his connections to the medical marijuana sector.

In Greenberg's plea agreement, prosecutors said Greenberg introduced a girl to other men who "engaged in commercial sex acts" with her, though the agreement does not name those men.

RELATED: Florida Rep. Matt Gaetz considering run for president in 2024, according to report

Gaetz has long been tailed by controversial rumored sexual conduct. A Florida state lawmaker last year alleged that when Gaetz was in the Florida House of Representatives he participated in a competition with fellow male lawmakers to earn points for their sexual conquests with "aides, lobbyists, and married legislators."

Gaetz at the time replied to that lawmaker, Chris Latvala, "just because I own you on twitter, don’t confuse me for your daddy when it comes to abusing power for sex." That was a reference to Latvala’s father, Jack, who resigned from the Florida Senate in December 2017 amid sexual harassment allegations.